Sunday, Apr 26, 2009 by Guglielmo "Rorschach" Butterworth (@fart)
In case you're completely oblivious and dumb, it may interest you to know that SA is home to a number of nearly decade-old subforums, all of which have their own styles, conventions, and regulars. Among them, one of the more notable forums is FYAD, which began as SA's original "anything goes" forum in 2000 and has slowly evolved over time to become based primarily on solid humor and creative expression. It is also pink.

Rorschach (aka weeeeeeeeeeeeed, CrazyTeen4Milk, Brian -[virgin]-, Ramses Dude, EGG NIGGA!!!!, and Fyador Postevelt) was the author of this FYAD post, and can be reached for comment, criticism or wall of curse words at fyadtales+rory@gmail.com. 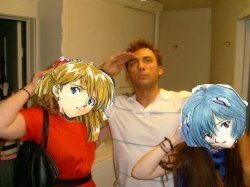 okay, im at my parents last weekend for easter, im bored and i had taken some oxycodone the doc prescribed me and my friends from high school call and tell me to come to my buddies for a party

i get over there and theyre trashed as hell wrestling really homoerotically, giggling as they grab each others asses on the ground to gross out the girls and sublime 40oz to freedom is blaring. im deciding whether or not i want to drink so i get a beer out and im sitting there watching the worlds gayest ufc match when someones college friends i dont know come in

they come up to me trashed as hell as im sitting on the couch and theyre like HEY BRO WHATS UP DUDE WHATS YOUR NAME. i really dont want to talk to them so im like "some call me CalmBro" thinking theyll think im a dork and leave me be. except one kids like "why do they call you that" and his friend decides to lend his expertise "haha its pretty obvious dude." then motions to me and says "hes calm." and i fucking lose it and start laughing hysterically at this kid who thinks hes intelligent for understanding the meaning behind my "name" they then call me CalmBro in conversation and reference as if this is my real name for the next 3 hours

a hot girl shows up and i know i dont have game because of the meds im on so i decide to get drunk so i can trick myself into thinking i have game, i begin chugging beer and vodka, bad plan, i get plastered and start acting like a toddler with the alphabros, someone finds pepperonis and throws them at me and theyre all laughing at me dodging them DUDE ITS LIKE YOUR IN THE MATRIX BRO. onme says. this goes on for a bit then someone throws a dominos sandwich box at my head so i monkeytoss an empty 40oz bottle at them with my feet and it hits them in the chest, this continues with bottle caps, pizza boxes, any/all food, remote contols, couch cushions etc.

i sdhould point out that they literally did this to each other for at least two hours and really hurt each other, one threw a mechanical pencil at another ones face and it embedded straight into his upper lip, he pulled it out and blood began running down his face and he threw it back and had the other kid not moved he probably wouldnt have an eye. 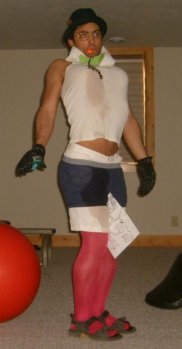 anyways some really fat kid with a lisp wearing a bandanna is like AWRIGHT GUYTH. READY?? READY GUYTH? YA READY?? GUYTH. GUYTH ARE YOU READY GUYTH ready for whatREADY FOR THITH and he jumps on top of a couch runs across the top then jumps perpendicular to another couch, wall runs off of people who are sitting on the couch and at this point im pretty impressed with LispBros agility given his size. well then he lands on the 40oz bottle barefooted the bottle shatters and he does a whirling dervish to another couch going aAaaaaUAUAUUUUUhhHHhH. aaAAAOOOUUUUUUUUu and im like "waht the hell is wrong" and he lifts his foot and

look at your palm
there were two glass shards a quarter of your palms size embedded prolly half an inch into the bottom of his foot and one hookshaped one also embedded. bloods spraying all over the room, on the walls, floor, in different directions on peoples shirts, on my hand, one girl gets it on her shirt and im liek UH OH HES GOT HEP and shes like no. nnoOOOOOO and runs to the sink

he pulls the shards out and now the blood is gushing out like a spilt jug of cranberry juice, theres a large puddle and hes going "aaauhh damn... daaamann..." and then looks at me with a slightly scared but extremely serious look and goes "eeuggh.. how bad is it.. CalmBro...." and i start laughing really hard again and im like "ahahahaHAh sorry man but its really bad i think you need to go to the hospital you definitely need stitches" and he yells IS ANYONE A FUCKING ADULT AROUND HERE??? WHERES THE FIRST AID KIT and wwere like we dont know and then im like "here man i can pour some vodka on your foot if you want" and hes like YES CALMBRO PLEASE and i do it and hes like "aAAAAuuuhhh aaww aww aaaww aw aww auoohh lets not do that again but AT LEAST --- AT LEAST --- calmbro -- KNOWS HOW T OBE AN ADULT" and i think it was that point that he realized hes been calling me calmbro all night

some mexican comes up to me and screams in my face YOU THINK THEY GON GIVE ME A DWI IF I DRIVE HIM TO THE HOSPITAL??? YOU THINK THAT??? and im like "uhhh i dont think thatll matter if you get pulled over dude so probably" and hes like GIVE ME THAT and chugs vodka and hes liek LeetS GOO and tells me to come and bring the bottle to pour on his foot, i stay there and then we went to mcdonalds

and im like ahahhaha what and he grabs me and hes like HE LEFT HIS SHOES. HE NEVER LEAVES HIS SHOES. WHY IS THERE BLOOD WAUAGUGHGUh