Games that scared us

Why Do I Keep Having These Nightmares?

Screenshot from "Purple Carrot Adventures in the Digestive System."My first home gaming platform was the Atari 2600. I saved my meager allowance as a seven year old for months and my parents promised they would pay for half. I assume in retrospect that they paid for just about all of it because my allowance was a fucking quarter a week and the Atari cost sixty dollars or something. I know I didn't save that much money. I was so happy to finally have a friend that didn't push me into a ditch or throw rocks at me. But then the nightmares came. Bleeping and blooping chaotically the Cyclops creatures from Berserk chased me down glowing corridors into the onslaught of a soccer team that moved in unison. I could see through their heads.

It was terrible, even more so because it was just the beginning. My infrequent trips to the shrieking animatronic madhouse of Chuck-E-Cheese only deepened this growing ink stain of trauma for me. Younger children cavorted in the disgustingly unsanitary "ball and disease chamber", some of my friends ran around in plastic tunnels laughing and playing, but I and a few brave others bathed ourselves in the glowing cathode light of the arcade room. And oh the horrors we did witness.

R-Lo and I have discussed at length with one another some of the more memorable milestones in our past gaming experiences. Games, types of games, and gaming trends have all contributed to our current fragile states of mental health. Allow me then, gentle reader, to lift the pleasant scales of ignorance from your eyes and introduce you to a whole new realm of imagination. Really fucking insane and scary imagination; like a clown riding a rocket with a naked woman and a bear.

Atari Games That Made No Fucking Sense

I'm pretty sure the fat blue guy with the water faucet coming out of him is throwing cow skulls at the girl in the dress. This game was called "Texas Chainsaw Massacre" and was based on the book by Judy Blume.There are plenty of these, including some of the mainstream titles like E.T. and Indiana Jones and the Temple of Doom. Sure, there were lots of nonsensical games for the NES and later consoles, mostly owing to horrible translation or just inscrutable plot concepts from Japan, but these Atari gems had something different about them. Some of them seemed to be a collection of completely random things transpiring on the screen that had nothing to do with you or the controller. Others were even more sinister. They were more akin to what an alien culture would produce if it were observing mankind through satellite probes or something.

A good example of this is a game I picked up new for a dollar back when I was around eight years old. It was entitled "FOOTBALL" and it was a masterpiece of surrealism. The players were three pixel blocks of either blue or red on a lined green field, they were exceptionally bad graphics even by 2600 standards, but this was just the start. The timer made no sense, listing periods (there were three) as 450 seconds that ticked down at about two per second. Scoring a touchdown got you five points and kicking a field goal (this looked like a dot detaching half of itself and hurling it across the screen) got you one point. There were no extra points, no running plays and two receivers for your detached pixel blob.

This is from the NES port of Operation Wolf. Just squint your eyes and you'll see the arcade version.There are two types of gun games; police simulators and war simulators. These are rough categories meant to encompass games like Lethal Enforcers and Hogan's Alley on one hand and games ranging from Operation Wolf to Zombie Blaster on the other. The war simulators are fairly straightforward and ludicrous. Usually you take on the role of a one man army blazing his way through jungles, towns, and bases while everything conceivable shoots at you, throws grenades at you or runs around trying to distract you.

Police simulators can be even more laughable, as the bad guys and civilians both run around like morons while you coolly dispatch them.

Everything I know I learned in "Gun Games".

That Holographic Game Sega Made 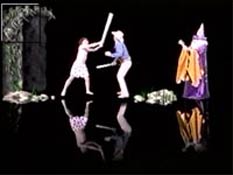 I hate this game even more than I hate you.This one occupies a special place in my memory. It was one of the games I wasted the most money on, it was one of the least rewarding games I've ever played, and it is undoubtedly one of the most disturbing. If you're not familiar with it the concept is simple but not-surprisingly idiotic. You have to guide a cowboy who was chosen by a wizard to travel through time to do something or other by pressing the fire button, the jump button, or one of the directions on the joystick. It was real video but played basically like Dragon's Lair or those other shitty cartoon games that were just rote memorization and timing. Each level was a different time period, as was made INTENSELY CLEAR by the single object placed in the otherwise black background.

Parts of the game were exceedingly violent. Your poor cowboy would relive the same hellish experience of being stabbed in the heart, hatcheted in the back, or having his throat torn out by zombies over and over again until you finally knew the exact instant you were supposed to press LEFT. Every time you died that fucking dumbass wizard would appear flailing his arms like he was being electrocuted and say "You're almost out of time reversal cubes!" Hooray!

This game didn't really disturb me as much as fill me with seething rage. Any time I see a game that follows this pattern I am inspired to throw it out a window, drop something explosive on it from the window, find the makers of the game, kill them, kill their family, and then kill everyone they talked to on the phone.

I've played some pretty strange action games in the arcade in my days, but Lowtax recounted to me the absolute winner as far as bizarre arcade action is concerned. The game was called .40 (Forty Caliber) and was fairly similar to Heavy Barrel, featuring an isometric view with a rotating torso for firing. It was set during the Vietnam War and earned "fucked up" points for allowing you to kill random animals in the villages that you rampaged through. Don't like that dog? Blow it to hell. Chicken giving you the evil eye? Not without its head it isn't.

That was just the tip of the iceberg though. After fighting your way through villages and jungles, killing numerous enemy soldiers and innocent pets, you fall into a foxhole and find yourself underground. The North Vietnamese had extensive tunnels to avoid the US Air Force, but I don't remember them having a huge underground dungeon. Another part I don't remember from the Vietnam War is when American soldiers had to fight three 100-foot tall monkeys that threw heat-seeking coconuts. I just can't remember that, I mean maybe it was covered up or something, but how did the game designers get a hold of this fascinating information? When you killed the monkeys their heads exploded. Then you emerged from the dungeon and went back to fighting "Charlie" in the jungle. 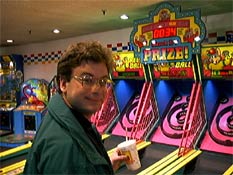 Way to go Goober, you've almost got enough tickets for that pocket mirror with a picture of Scooby Doo on the back.Oh yes, how can I forget the sweet rewards you could reap for these labors of love; the tickets! Skee-ball, Whack-a-Mole, and many other really simplistic games overcame their lack of bells and whistles by spewing out tickets for someone who performed well. I used to dream, literally have dreams, of winning entire rolls of those tickets and going on a mad "spending" spree in the Chuck-E-Cheese prize gallery.

There were three categories of prizes you could choose from:

The first category consisted primarily of things like those plastic spider rings, combs, parachute soldiers, erasers, and plastic jet planes. The second tier of prizes was composed of slightly less obvious crap like Japanese paper fans, finger-cuffs, small flash lights, and maybe a shitty knockoff of a Go-Bot. The final category - the dream house of the prize area - was the electronics and huge stuffed animals. They ranged in tickets from INFINITY to INIFINITY TIMES TWO and were generally crappy third-rate Tiawanese garbage that would probably catch fire or try to murder you in the car on the way home or something.

Since to amass the great fortune to purchase an amazing plastic spider ring required roughly three excellent games of skee ball, this whole ticket thing was obviously a scam. I figure if you were running a place like that you might as well take it the whole way. Just fill all of the baskets with plastic spiders and erasers and combs and put them on every shelf with a different ticket value.

Kid: What's that?
Prize Maven: It's a comb.
Kid: What about on the top shelf?
Prize Maven: Also a comb.
Kid: What's the difference between the one that costs 50 tickets and the one that costs 500,000?
Prize Maven: The 50 ticket comb will give you AIDS. This comb here on the top shelf will help you get women. It will treat your hair like the king it is.
Kid: I've only got 250 tickets.
Prize Maven: Then you can get five of the AIDS combs or you can get one of these combs that won't give you AIDS but I've been chewing on it all day and I have the flu.
Kid: I'll take spider rings then.
Prize Maven: The ones that make your dad divorce your mom because you're a bad kid or the ones that don't do anything but smell like paint-thinner.
Kid: (Starts Crying).
Prize Maven: (Starts chewing tobacco).

Yes, it's about videogames, why thank you for rubbing my face in that you fucking asshole. Lowtax also wanted me to add that he was really frightened by Monster Party for the NES.