To me, television is pretty much an entertainment wasteland. I’m fairly convinced most network sitcoms simply take the scripts of shows that were written in the 60’s and 70’s, change a couple words, add a few modern pop-culture references, pop in a gay character or two and churn out 24 episodes of recycled plots, gags, and one-liners. Thankfully though, occasionally a network executive or big-time producer messes up and accidentally manages to create a worthwhile viewing experience. Everyone has a favorite or two, and if you’re reading this site I’ll wager that your favorite show probably involves ogling Jessica Alba or Sarah Michelle Gellar. My favorite happens to be HBO’s The Sopranos, whose third season starts up this Sunday.

Ask any Soprano fan about the show, and they’ll probably rave on and on about the excellent writing, movie-quality production values, complete lack of annoying advertisements, compelling characters, nifty visuals, and top-notch acting, not to mention the always welcome combination of foul language and nudity. While The Sopranos is all this and much more, the real reason the show is so compelling is that it’s basically just a well-crafted testosterone-fueled daytime soap opera. Of course, no self-respecting guy will admit to this, because soap operas are for girls. But it’s true. The only big difference is that instead of having big weddings, somebody gets shot in the face, cut up into tiny pieces, and thrown into the river. And while soap opera characters get recast or written-off, Sopranos characters are either murdered or stripped of their all dignity and forced to move to South America. This meshes well with the stereotypical male philosophy of just shooting your problems with a gun to make it go away, which is contrary to the stereotypical female philosophy of whining about your problems until some dashing young doctor saves you from certain doom and then marries you in a lavish ceremony. Or whatever, about the only thing I learned from my brief experience in daytime soap land is that even homeless females in these silly little universes have boob jobs, a flattering wardrobe, and a great makeup artist. 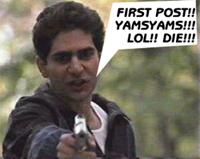 Organized crime and message boards have more in common than you might think. Ask your local conspiracy expert for details.

Anyways, The Sopranos, to some extent, glorifies the gangster lifestyle. Sure, it has its downsides - you have to live in New Jersey and even the hottest Italian chicks seem to morph into nagging, overweight trolls once they hit 25, for example - but you get to roll around in piles of laundered money and kill people you don’t like with little to no fear of prosecution. Hooray for murder! But unfortunately, I am but a small nerd. I don’t have a cool nickname like “Bullet-Face Pete” or “Big Pussy” or “Brickface.” Instead, my nicknames include “Fragmaster,” (a crappy nick I can’t ditch and which is easily and often sullied by removal of the “r”), “K-Dog,” “Cakewalk,” “The Cheeser,” and “’Lil Peanut.” These nicknames are so bad that even Dick Tracy would laugh in my face, shoot me in the neck, push me over a bridge, and then laugh some more. So I began to think of the nerd equivalent of gangs: forums.

I realize there are a few minor differences between message boards and organized crime: One talks endlessly about Zero Wing and how your scrubs just got owned by a roofle, and the other deals drugs, extorts business owners, and beat people up with baseball bats, but the actual structure behind your average Internet community discussion area is alarmingly mob-like. You’ve got the fat-ass admin guy (Lowtax) with all the power whacking (banning) people who get on his nerves, the underbosses who do all the dirty work, posting everyday even if they have nothing interesting to say, the consiglieri who are well-known and liked within the organization, due to their amusing stories or massive porn posting, the hitmen with quirky personalities and gimmicky methods, and the foot soldiers who say “all your base are belong to us,” “LOL,” “me too,” and “YUO = FAGOT.”

Do you see what I’m getting at? Of course you don’t. What I’m trying to suggest is that forums should be more gang-like. Forums would be a lot more exciting if insulting the wrong troll or posting a lame joke caused you some sort of physical harm. There isn’t nearly enough violence on the Information Superhighway. We’re far too safe online, there’s not enough risk. Sure, your credit card can get stolen, your phone number can be posted to alt.sex.people.freaky.weird, or your entire identity could be downloaded onto a floppy and held hostage by terrorists, but the only physical injuries you’re likely to incur are carpel tunnel syndrome or over-self-erotic-massage disease. Someday, I hope the Internet is dangerous. I’d love to be able to walk around the cyberverse and hit some sucker in the head with a pipe-wrench, dodge Internet traffic on the virtual roads, and fall off a VRML cliff to my bloody and violent death. That’s the only way the Internet will make any money. People don’t want e-Coupons or e-Commerce or e-News or any of that junk, they want reality with slower loading times, animated gifs, and easier access to nudity. And this, my friends, is a noble goal. Log on!

Science has confirmed what many high school English students have speculated for years: Shakespeare was a pot-smoking, dirty-ass hippie! Only a baked out-of-his-mind stoner could write pages and pages of screwed up dialogue and comic exchanges that involve people calling each other “rascal knaves.” As you can probably tell, I’m not a big Shakespeare fan. He’s overrated, to begin with, and the passage of time has transformed his words into blocks of mostly unreadable code only old people and literary nut-balls can decipher. Check out this excerpt from his “comedy,” The Taming of The Shrew:

Trembled and shook; for why, he stamp'd and swore,
As if the vicar meant to cozen him.
But after many ceremonies done,
He calls for wine: 'A health!' quoth he, as if
He had been aboard, carousing to his mates
After a storm; quaff'd off the muscadel
And threw the sops all in the sexton's face;
Having no other reason
But that his beard grew thin and hungerly
And seem'd to ask him sops as he was drinking.

While I’m sure you could get away with this kind of talk in Everquest or at a Renaissance Faire (HUZZAH!), us commoners can’t relate to this stuff at all. So urge your local school district to remove this pothead’s ramblings from the curriculum. Cheech & Chong smoked pot too, and we don’t exactly show their crappy movies to impressionable schoolchildren, do we? Now if you’ll excuse me, I’ve got to go back to writing my adaptation of Romeo and Juliet which replaces the star-crossed lovers with pusher and shover robots, respectively.