Geralt of Rivia: Legendary Witcher, Idiot, Occasionally In Control of His Body 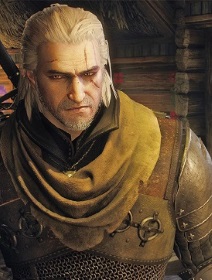 Geralt of Rivia is a formidable opponent. His lithe body has been enhanced by mutagens, granting him uncanny powers and senses. Make the mistake of challenging him to a fight and you'll soon find yourself overwhelmed by a flurry of blades, magic, bombs, potions, and crossbow bolts.

Also, Geralt breaks his ankles when he steps down from a height of more than three inches. If he were to hop over a waist-high fence his body would reach terminal velocity, exploding into paste and white stubble when it came into contact with the soft grass on the other side.

He moves like a toddler learning to walk. Geralt goes from a trudging stroll to a full-on sprint without any transition at all. When he tries to loot a container he often misses and mistakenly interacts with a nearby candle. In combat he doesn't have precise control over his body, just vague suggestions of direction. It's like there's a panning camera beyond his control, and his movements are sort of relative to the position of that camera, but not quite. Geralt never knows when his attack will be an overhand slash, or a dash forward, or a lunge, or how far he will move during that attack, or whether he will hit the enemy he is facing, or whether he will perform a dazzlingly useless pirouette.

Geralt of Rivia is far too cool to waste his time on dumb shit. He shakes his head and sighs as quest givers go off on narrow-minded, superstitious tangents. He is constantly having casual sex with powerful and interesting sorceresses who use magic to make themselves unnaturally attractive. They see him as a fun diversion, as he is worldly and rugged and amusing.

Also, Geralt is obsessed with a collectible card game called Gwent. Sometimes after a grueling quest he will stand amidst a pile of corpses and reorganize his army's cards. He is driven by a compulsion to collect all the rare cards. A "hullo" will barely leave a merchant's mouth before Geralt - shifting impatiently from one foot to the other - blurts out "Wanna play Gwent?"

Geralt of Rivia is a master negotiator. He influences kings, trades quips with scholars and assassins, and peacefully solves conflicts by convincing intelligent monsters to open up about their problems.

Also, Geralt gets ripped off by every merchant in the known world. This pile of swords is worth 5,000 crowns. He knows because the information panel says so, clear as day. So why is this guy offering Geralt 30 crowns? While negotiating a contract's rewards, Geralt could only haggle the quest giver to pay one crown more than the starting bid. Again, convincer of kings over here. Getting ripped off by people who don't even have proper names. This guy is literally named "Peasant" and his pal is "Blacksmith".

Geralt of Rivia is a master detective. He's been around for more than a hundred years, in which time he has accumulated a wealth of knowledge about monsters, legends, herbology, crime scenes, politics, and geography. His witcher sense allows him to scan his surroundings and hone in on clues. He's basically Batman with a Bat-Computer in his head.

Also, Geralt can't solve the mystery of inventory management. He opens his bag and is greeted with a whirlwind of garbage. There are around three hundred types of flowers in there, eighty different crafting components, and ten treasure maps that he's afraid to throw out because he's not sure which maps he's used and which ones he has yet to follow. Then there are the old and useless pieces of equipment that might be upgraded one day, thirty five honeycombs, and, of course, more than a dozen dog livers.

Seems like a lot of stuff, because it is. Geralt can manage just fine though. Unless he loots a cloth shirt. Then he'll be overburdened, and will have to do his wobbly toddler walk to get ripped off by the nearest merchant.