Plot Points for Under the Dome Seasons 3 Through 10

I watched the first episode and confirmed it was yet another lesser Stephen King adaptation. We're talking The Langoliers, not The Shining. Stilted and occasionally goofy enough to be fun, but not "I'll sit through twenty hours of this" fun. 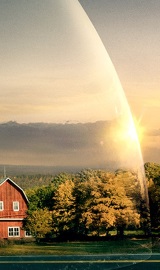 Take an ordinary town. Boring. Add a dome. Voila! Three seasons of intrigue.Now, inexplicably, season three is looming over us like some sort of dome. Season one's plot asked whether or not the town could get out from under the dome. Apparently the answer was "no". Season two asked "I guess we're really stuck, huh?" and the answer was "yup".

How will the show keep things fresh this season? What plot developments can the writers possibly scrounge up to keep stretching what should have been a four part mini-series into an indefinite production? I have a few ideas.

The first post-dome child is born. This brief moment of joy is ruined when its parents realize the birth certificate lists the child's name as Bad Dome. Now that's the baby's name forever. They can't do anything about it, either. It's an official document. Who could have done something like this? Kyle, the town villain, watches from his hiding place in a nearby bush and laughs so hard his shades almost fall off.

When he accidentally drops a bowl and watches it land upside down, Joe finds himself overcome by inspiration. He gathers a group of main characters and they set off on a journey. The purpose, he explains, is to make sure the dome is still there. Because if it's not there, they can leave. When they reach the dome they make sure it's there. It is. Dang.

Two attractive characters obviously like one another, but they don't kiss or bone. It always seems like one of them is disinterested or distracted when the other one is pining for them. Finally in a vulnerable moment the two lean in for a tender kiss. One of them stops, turning aside. "I love you," they say, "but the dome..."

Outside of the dome, a scientist makes a shocking discovery. By analyzing the surface of the dome with a fancy sounding device, she finds that there are actually two layers to the dome separated by a millimeter. The town hasn't been living under a dome. All this time, it's actually been living under TWO DOMES. This could be a season cliffhanger.

Bickering siblings use chalk to draw a line down the dome's center, dividing the town in half. You won't believe the surprising alliances that form as old friends square off and bitter rivals become uneasy partners.

Turns out the only object that can pass through the dome's mysterious surface is the newest Ford Fusion. Everyone in the town loves this car, and several impressed characters talk about the features they like the most.

The mayor calls a town hall meeting. On the agenda, a vote to determine what people think of the dome. After an intense sequence of debate and personal politicking, the final vote tally is 65% against the dome, 35% for it.

In the town diner a couple of tough farmer type guys are grumbling about the dome. "I'd like to get my hands on the sumbitch responsible for that thing," says one. In the booth next to them, the town priest lays a newspaper over his magic lamp and slowly slides it off the table with a nervous glance.