The Glory of Golan: An Exclusive Excerpt!

Weep, worthless citizens of Oak Grove and kneel your strained eyeballs before Golan the Insatiable, Godlord Terrible of Gkruool, Crusher of Wills, Raper of All!

Some of you shall presume that I am gifting you with addressment through the pathetic portal of this worthless newspaper once more because of the comments one Mrs. Budnick made concerning the orgy I had last Wednesday. Well, as you likely always are in your unfulfilling lives, here you are wrong as well! For I have long grown ferociously indifferent to the feeble yowls of Mrs. Budnick. I have just as much right, if not significantly more, to observe the Sex Moon Feast of All Sex (it does not translate easily to your effeminate language) as you cretins to do to observe your myriad of laughable holidays!

I would like to see Mrs. Budnick offer up proof of this "crucible of bones" we supposedly tossed people into. And those two revelers from whom no one has heard again made several loud comments to me and many others about possibly moving to the neighboring kingdom of Canada without telling anyone and leaving all their belongings behind. Sex Moon Feast of All Sex surfaces a host of unique and powerful emotions. Such flights of journeylust are not uncommon. But this is digression!

I commit my compelling words today on the subject of the recent publication of a book by one H. H. Mayer Sloane and that cattle-brained dullard Yor the Mighty, titled The Fight and Might of Yor, Mighty: The Barbarous Warrior of Savage Lands From Beyond Our Own. By the four beating hearts of ZxZazel, it stirs within me a storm of destructive fires even just writing that convoluted and stupid title! Surely, fat idle and under-educated citizens of Oak Grove, you are not familiar with this bound work of blood-flecked feces! Nor should you make yourself so! And do not be seduced into the Barnes & Noble of Elk River this weekend, where Yor is to stage a "reading" of this published disgrace! 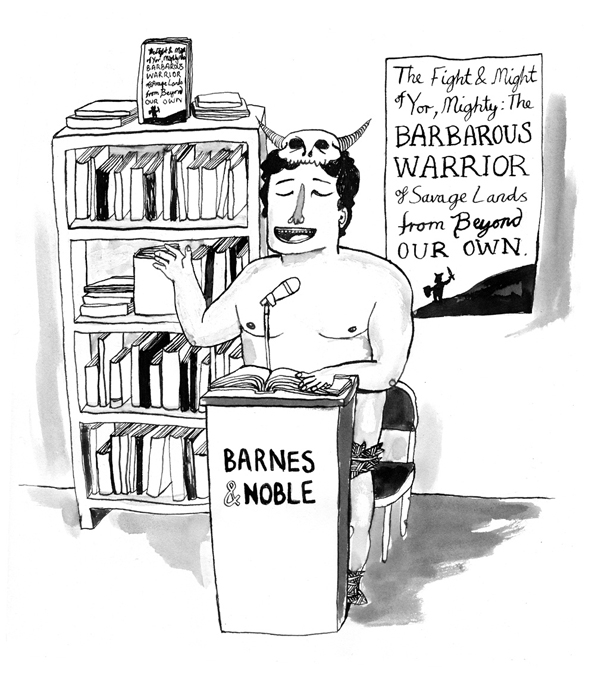 Hear me true, simpletons: I find mercy in all its forms disgusting, but I will nonetheless spare you the wearisome chore of Yor's tedious manuscript. I have had the book spoken to me by my acolytes and I wanted to tear off my genitals and gut myself with my own phallus spines! You have the eternal binding oath of Golan the Insatiable that it is all a pack of lies! And embarrassingly prosed!

Plainly, you are mystified as to why Yor, the clod spawn of nugatory peasants, has a published work spreading his meaningless legend, while Golan the Insatiable, a demigod who death-gripped an entire world, has none. For the first, do not be fooled into being impressed that Yor has a literary champion. My acolyte Dylan looked into this "author" H.H. Mayer Sloane, otherwise known as balding Henry Sloane, a school English teacher in White Bear Lake. Ha!

For the second, Golan the Insatiable too has a champion to sing my saga onto the written page. I just did not want to tell anyone, because it is far from a big deal for Golan the Insatiable. My legend already torments the denizens of Gkruool in waking and in slumber both! But as Yor has forced my modesty, I will say that a fancy publishing house in your world, that I shall not name because of my indifference on the matter, has begged and pleaded that I allow my stories to be told.