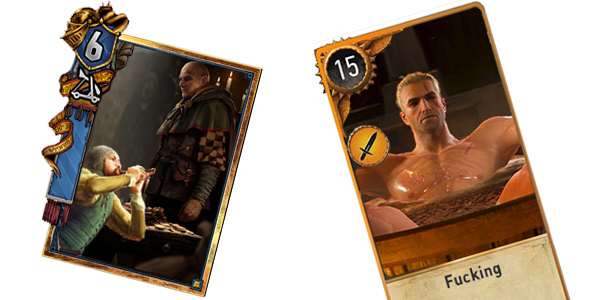 Cosplay Counterplay: Immediately turns an opponent’s gold card into a cosplay equivalent. Not the good cosplay either—we’re talking about that local Comic-Con, pudgy, acne-scarred kind of cosplay. The card loses all points. Also, the points of nearby cards are lowered as everyone is sort of embarrassed to have it around.

Weather Type: Cleveland: An all new card is being introduced that will drastically shift weather conditions between each turn. One second it’s seventy. The next you’re under six inches of gross ass snow. No one knows how it will end, but you can be certain that it will always be terrible.

Enemy Tear Devourer: The moment you play this card, the Gwent game will automatically scan the Hearthstone subreddit for unhappy players. For each paragraph complaining about RNG, balance issues, card costs, or how Blizzard treats players, you gain one point and we will send them fourteen beta keys. Without a doubt our strongest card yet.

Awkwardly Sexual, Completely Unskippable Scene: This card will begin a three-minute-long sexual cutscene featuring any two cards from your opponent’s deck. Extremely graphic, high polycount penetration. Ideally played when a parent or roommate walks past your opponent’s screen, forcing them to helplessly explain that the game isn’t normally so intensely sexual.

Fanboy Rally Cry: Add two points for each tweet you send that contains: 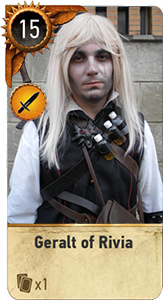 Amazing but Confusing Animation Blast: Once played, this card activates… something? There will be a cool animation, some flashes, and a badass sound effect, but no one actually knows what it does. Maybe it switches a card with your opponent? Maybe it raises the point value of the row? Maybe it sends your browser history to third party marketers? No idea. Great art through!

Weather: No Change: When played, the in game weather doesn’t change, but both players will be forced to discuss how it’s been lately. The game stays at this point with both players commenting on whether spring is here to stay until one admits defeat or plays the counter card, “Welp, I Guess It’s Time for Me to Get Going.”

Poor Fucking F2P Player: When played, all of opponent’s cards revert to base deck garbage. They can still play however long they want with this new deck, after all the game is F2P, but they will lose. They’re JV Gwenters, pathetic swine meant to endure miserable defeat beneath your well financed deck. Of course, this card can be countered with an unlocked mid-match Premier Card by entering your Credit Card number.