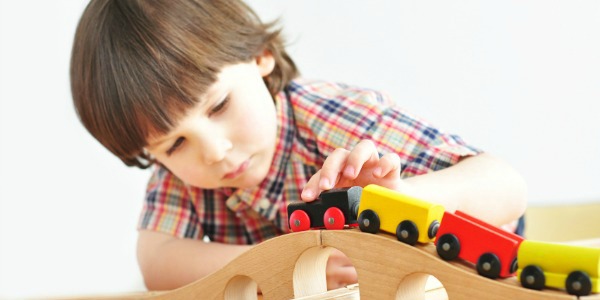 Zayden Merkle loves playing with toy trains in his parents' living room. But this week, instead of sitting on a plush carpet, he's in water. Hot water.

"I have to admit, I wasn't sure if we should let our six-year-old child have his own YouTube channel," says Jacob Merkle, Zayden's father. "But it gives him an excellent chance to express himself and learn how to use computers: two very important life skills. "Eight months ago, Jacob quit his job to become Zayden's full-time manager, and he's sticking to his guns after his son's first big scandal. "I don't even see what the big deal is," says Jacob. "Everyone's just too sensitive today. I mean, I have some pretty strong feelings on Steve Harvey, but if I said them, I bet you'd never print a word. Not in a million years."

Zayden doesn't just have his dad on his side, though. Other popular YouTubers have rallied to his cause with the #FREEZAYDEN hashtag currently making the rounds on Twitter. At the center of this movement sits The Expired Mayo Gamer, a popular Internet celebrity who rose to fame by eating jars of expired mayonnaise on camera while reviewing popular video games. And he isn't happy.

"This is just another example of the left trying to silence speech they don't agree with," says The Expired Mayo Gamer, who chooses not to divulge his real name for fear of retaliation. "I mean, I did an entire video in blackface where I smeared expired mayo onto slices of watermelon, and you know what some people had the balls to call me? Racist! Come on, the whole joke is that I wasn't supposed to be doing that! Just more proof liberals have absolutely no sense of humor."

Along with The Expired Mayo Gamer, Zayden has found support in some of the YouTube personalities he cites as his "influences:" GrundleSnatch, Angry Carl, GlorboBorb, and The Stizz. Together, they encourage their followers to find people on social networks criticizing Zayden, and send them countless messages until they inevitably make their accounts private. And this simple tactic has been a resounding success. "It's just a load of bull****," says Angry Carl, who currently holds the world record for shouting during a rage quit while nude. "We 'Tubers stick together against the haters jealous of our success and accomplishments. Did you livestream Battleborn with the fat guy from the Borat movie? Then shut the hell up."

These endorsements have heartened Zayden's father, who fully supports his son and his experiments with edgy, outside-the-box humor. He recently purchased a complete, child-size Nazi uniform from a local specialty store, which he plans to make a vital component of Zayden's next wave of content. "When people say you're bad, it's extremely important to quadruple-down and be even worse," says Merkle. "I think that's a very important lesson to teach the boy."