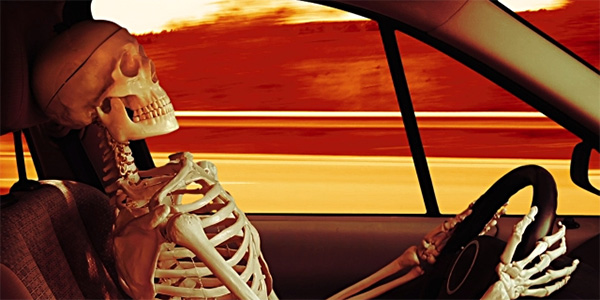 It was Halloween night and I went to a party. I had a headache and my friend threw up a lot so I decided to get an Uber home. I punched in my address and saw a new ride option for a Skeleton Uber. Our town's skeleton population had gotten pretty big and they eventually took over the ridesharing industry because it was so easy to insure them. That's probably why Skeleton Ubers cost about a third of any other ride. The drivers in the taxi union didn't like this, but they were also afraid of the skeletons so they didn't do anything.

I was having kind of a bad night and decided it might be fun to have a little scare on Halloween. I pushed "Confirm Skeleton Uber" and the app made my phone play Dracula music, which wasn't very scary but I still appreciated the effort. As the app showed the skeleton's car getting closer, it started doing loops around the block about half a mile away. I don't know if this was supposed to be scary, but it made me anxious I guess. The Skeleton Uber eventually showed up across the street so I had to walk down to the stoplight to cross. I put in the exact address so the skeleton would know which side I was on, but maybe making things unpredictable helps the Skeleton Ubers be spookier or something.

I got into the back seat of the Skeleton Uber and the skeleton turned its head around backward on its body to look at me. This was supposed to be scary in theory, but if you've been around skeletons as long as I have you know it's the first thing they do to impress you. He started driving and I saw some bottles of water in the back pouch of the passenger's seat and decided to grab one. They were warm, which was pretty gross, but not scary. Then I saw the skeleton had some candies in one of the larger cup holders, so I reached out and grabbed some. They were Mary Janes and Bit-o-Honeys so I immediately put them back. I didn't think they still made them and thinking about them made my teeth hurt. But again, not scary.

I probably looked tired or bored or something because the skeleton reached back and handed me the aux cord. The ride was only 15 minutes but I thought if I played some of my own music I might feel better. I started up a playlist and when the sound started coming out of my phone the skeleton hit a button on the CD player in his dashboard. What sounded like an Ed Sheeran song started playing. He popped the CD out and reached under the seats until he found another one to put in. I think it was supposed to be haunted house sounds, but it was so scratched up I could barely tell and it was making my headache worse. "That's okay," I told the skeleton, and decided to stare out the window for the rest of the trip. Through the crack between the driver's seat and the door I saw him refreshing his Instagram, which made me really nervous but not in a Halloween way.

The skeleton pulled over to the curb and flicked on his hazard lights, so I opened the car door. "Have a good night," I said, and the skeleton played a little tune on his ribs but I think he messed it up because I couldn't tell what it was. When I got out of the car, I realized I was actually three blocks away from my apartment and dead this whole time and things were scary.