While many of you lovely folks and feminine folks may be looking forward to another glorious holiday celebration, preparing your Christmas Christian turkeys and Kwanzaa magic ceiling tiles and Hanukkah chocolate coins filled with delicious Jewish celery cakes, there is a holiday which many people across this fine planet of ours (Earth) mistakenly overlook; SA Shotglass Day, the day when you purchase an authentic SA shotglass. This fun and festive celebration was created in the summer of December 32nd 1963 by Sir Alfred P. Whirligig as a tribute to his deceased wife who was in a hospital sick with a primitive version of AIDS known then as "AIDS Lite." Sir Alfred and his wife Claudia Peller were recognized far and wide across their home town of Ribbed Dog Falls, Kansas for being affluent and generous drunkards who wouldn't pause to provide an abandoned orphan or crippled child with a free shot of high quality gin, even if they begged and pleaded against it. 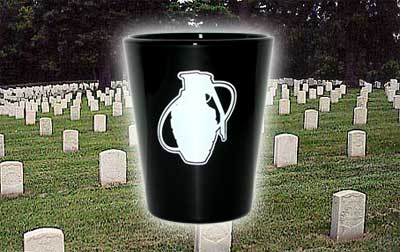 "But please sir," the filthy juvenile beggar would cry in desperation. "I am only 12 years old and gin makes my tummy hurt!"

"Nonsense!" Sir Alfred would respond with a dismissive wave of his hand. "This is good gin and will help your balls drop, salty young urchin!"

With a quick whip of the hand and a forceful choke hold on their throat, Sir Alfred would watch in delight as a shot of warm, smooth gin disappeared down the fortunate child's gullet. He would congratulate himself on a job well done and continue to skip his merry way down Whipplespot Lane to Ye Olde Housee of Extrae E'se, a popular store that sold versions of the letter "e" which could easily be affixed to the end of words to make them appear much more highly historical and important. Also you could buy hookers there and beat the utter shit out of them without the authorities saying a word to you because that was the magic of Ye Olde Housee of Extrae E'se.

Sir Alfred P. Whirligig used his limitless funds to create such important charities as The Foundation For Surplus Kite String, A World For a Better Future World Of the World Of Tomorrow's World's Future, and the Pentagon. Unfortunately, when he turned 73, his wife Clarabelle Peller fell into a deep coma and would only regain consciousness during weekends or important Poker tournaments. Sir Alfred was heartbroken; the love of his life and mother of all his zero children seemed to have an incurable disease which defied all explanation from leading French witch doctors. He would quietly slip into his wife's hospital room around midnight of every morning, exercising extreme caution to not disturb her delicate slumber, and gently caress the silken hair flowing from her beautiful porcelain armpits.

"You are the love of my life, dear Clarise." He would croon into her deaf ear. "I will not let you die on me."

Fortunately Sir Alfred did not let the depression take ahold of him and topple his spirit like his great uncle Benjamin Chocopottomus who died of chronic depression after being trapped in an African salt mine with no food or water or oxygen for nine days. He found a new beginning in a small Methodist church outside of Fort Candelabra, Missouri, a tiny series of circus tents dubbed "Our Saucy Frozen Lady of the Miracle Blade." It was there he met Reverend Vincent Claymore, an expert on the withdrawn and introspectively brazen Methodist lifestyle. The good Reverend led Sir Alfred on a journey of self discovery and knowledge which took him from his hometown of Flying Buttress, Kansas all the way to the frozen deserts of the Bermuda Triangle. On his expedition he encountered a particularly witty sea crab named "Henry" and a rotund gerbil who only spoke in Cantonese and attempted to stab the eyes out of anybody who spoke to him. They engaged in many exciting journeys which I'm sure can be read about in any place which sells items detailing exciting journeys, such as the official authorized Eddie Bauer Journey Store located in scenic Platte Falls, Utah. None of their journeys involved that dreaded rapscallion Eddie Haskell, so if somebody attempts to sell you a journey about him please note it is an impostor and does not contain the 100% recommended value of vitamin excitement that our journeys contain. Additionally, despite whatever these imposters may claim, Eddie Haskell will NOT come over to your house and paint your deck if you agree to purchase his Garbage Pail Kids set from eBay.

Sir Alfred would periodically call home to inform his wife of the many wondrous and awe-inspiring adventures he would regularly embark upon, but she didn't share his enthusiasm for such dangerous journeys, mostly because she was in an advanced state of death when he called her.

"Honey, you cannot believe what trials and tribulations I struggled through today!" he would triumphantly bellow into the boomaphone, which is what they called telephones back in those days, whenever those days were at the time of those days. "I scaled Mount Painful and brought back the Infernal Tundra Shard of Triumph for my master, allowing me to gain a level and increase my charisma threefold!" He would wait for her response, but would eventually give up and admit defeat after 20 consecutive minutes of silence.

"Dear, are you there?" He would ask while quizzically furrowing his brow in only a manner that he could furrow. "Can you hear me furrowing my brow in a quizzical manner?" Eventually he would hang up around an hour or so later, but he would never be able to figure out why a loving and caring god would allow his beloved wife to die. He'd also wonder how her corpse was able to pick up the phone in the first place.

After graduating to the level of Grand Chancellor of Sterling Plumbing in his Baptist church, Sir Alfred decided to honor his wife by purchasing a ceramics factory that specialized in the production of metal shotglasses. He would distribute these stunning examples of fine drinkware during the holidays as a memorial to his wife's eternal spirit and her love of providing underage children with alcohol that allowed them to easily slip into the exciting, colorful world of alcoholism and lousy penmanship.

And so the miraculous holiday of SA Shotglass Day was born, although nobody quite knows why it was named "SA Shotglass Day" because it had nothing to do with anything that had the abbreviation of "SA." No wait, maybe the "SA" stood for "Sir Alfred," which would make sence and wouldn't simply be an incredibly, unplanned coincidence. So what are you waiting for, you lusty layabout louts? Purchase your own SA shotglass today and have it in time for the holidays!

Coolio once shot me in the ass

Ryan "OMGWTFBBQ" Adams here with something new. Something different. Something that'll knock your socks off. Forum Goon X JAKK has put together an amazing spoof of the critically acclaimed Square game, Final Fantasy III. It's rife with humor from the site and the forums, so if you don't get a joke, then I suggest you join the forums and read the whole site to get clued in. Heathen. Heck, you even get a chance to play as ME!

Now here are a few screenshots to whet your interest. Have a safe and happy holiday!