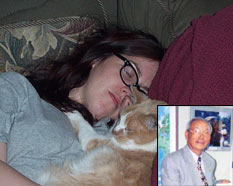 AOL girlfriend Fistgrrl napping with one of her 500 cats and (inset) imposter Fistgrrl receiving award, possibly for skill at forcing me to dance while he jacks off.Folks, it has been really fun writing Something Awful for you all from Ohio, but the time has come for me to leave, and this is my last post…from Ohio. I know, I dashed your hopes that I was quitting and we would turn all my updates over to that kid who slaps the keyboard that his mom had specially coated in wax so it doesn't poison him when he tries to swallow it. I think his name is Scotty D, I don't know what he writes about, crayons, or ponies, or something. Whatever it is, I guarantee you that it is the absolute pinnacle of Nintendo-related humor.

For those of you who aren't aware I will be moving in with my AOL Girlfriend "Fistgrrl" on Tuesday of next week. Calling her my "girlfriend" might be a bit of a misnomer since she's a 59 year-old immigrant Korean man who makes me dance while he jacks off, but that's okay, there is a lot of love in our relationship beyond the jerk-fests. I think, he doesn't speak any English so he might be calling me a "jerk" when he throws tea-pots at my head and shoves me out the door every time I visit.

I made all of that up except for the fact that she likes to hurt me. She's not 59, she's not Korean, she speaks English, and unlike some people on this site we aren't engaged yet. Oh yes, I know, the scandal of living together under one roof before marriage! To remove the "living in sin" stigma from the situation we have told our friends and family that we're saving hardcore urine play for after the wedding. We're lying, since lord knows I love me a golden shower, but they don't have to know that.

Going from the roommate-having, trash-heap apartment-living, bachelor pad orgy-holding lifestyle to the solid commitment of living under the same roof as my girlfriend is going to be quite an adjustment. Before I gave in to her desperate begging I weighed the options and considered the unique challenges of living together carefully. I did this the way I do every single article; I put together a slightly amusing bulleted list of items and as a wacky spin called one part "pros" and one part "cons". 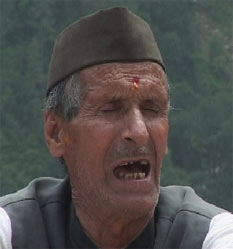 Entertainment in Chicago is varied and exciting! This man entertains by shrieking obscene references to your mother at you from a street corner. He is also in the Crazy Army.Playing is for pleasure, and being a lazy American I place "being entertained" high on my list of priorities. This ranges from entertaining myself by writing or drawing to being entertained by movies, video games, and fatal car accidents.

There are a lot of entertaining things to do in the city of Chicago and I have a car and semi-functional motion-related flesh sticks attached to my hip-region.

If I am broke I can always stand on the balcony and throw things at pedestrians below.

A park nearby is rumored to have a jungle gym.

Fistgrrl may not take kindly to me not showering for five days and writing in permanent marker on paper-inserts from her record collection.

She might make me get out of bed instead of going to the bathroom through an elaborate series of tubes and bilge-pumps.

I can no longer wait for the rats to clean up the cans of soda and bottles of beer I leave on the floor when there's no room on the tables or couch.

The only two kinds of people who don't enjoy a good hot meal are anorexics and communists, and despite my leftist leaning I am not an anorexic just yet.

Fistgrrl is an excellent cook and knows great places to shop for food, she is also very attentive to what things I like and don't like such as touching anything I am expected to eat with those filthy fucking hands.

She also has excellent taste when it comes to dining out and in my visits alone has introduced me to a number of restaurants I would have never thought to try otherwise.

She has very little to no appreciation for the timeless culinary classic "cheese and ketchup sandwich".

May find habit of warming dill pickles by taping them to the underside of my scrotum to be slightly distasteful.

Have not discussed weekly "dinner with the Kaiser" ritual during which I strip naked except for a spike-topped World War I era German helmet and eat a salad bowl full of uncooked hog fat.

She enjoys ice cream, I enjoy it when I scream. Hahahaha, get it?! Because I yell a lot? And she likes ice cream?!! Do you get it?!

This is Fistgrrl's bed, she is either in training to be a senile grandma or is from the civil war era.Where the action is! But it's more than that, it's a place to relax and read a good book after a hard day. It's a place to lie down and take a nap or jack off furiously to European hardcore magazines that I found clogging a storm sewer. It's a place to hold each other and talk quietly in loving tones about how no one can know that I beat her or the next time I won't miss with my sawed-off.

She is a wildcat in the sack and is not afraid to stick things anywhere for any reason at any time up to and including live animals no larger than her forearm.

Just like when she's talking to me, holding her in my arms puts me to sleep in about five seconds.

Her bed is more comfortable than mine.

Refuses to make me money with that ass.

Laughs at me when I take my pants off before intercourse; cries in the shower after intercourse and refuses to come out of the bathroom until I "go for a walk".

Sets the alarm-radio to the 24 hour Arabic ululation station, 91.4 ULU.

When I say "good night, I love you" she stares blankly up at the ceiling for several seconds before humming the Doors song "The End".

Has voiced her disapproval of my regular post-coital testosterone injections and refuses to oblige me afterwards when I flex my bicep and scream at her to "FEEL THAT FUCKING ROCK".

She reads Oprah booklist novels at night, I read books that are on a government list as "flagged for purposes of criminal skullduggery".

Finding a mate that attracts you on every level is important, and no matter how hot, a vacuous airhead is poison to a long term relationship. Fistgrrl is smart, I've know that for a long time, but is she smart in a way that interests me? Only the bulleted items of truth and justice will tell!

She is extremely well versed in film, literature, and has a modest interest in computer games.

Has repeatedly stressed her disinterest in shoes and socks.

Enjoys spending time in the kitchen.

When I start talking about World War II she fakes a seizure and insists I call 911, yet miraculously recovers the instant EMTs arrive.

Will blabber on endlessly about idiotic female crap like "current events" and "seeing other people".

Is a real nervous nelly when it comes to letting me drive drunk.

Reading through the list of pros and cons I am more sure than ever that I am ready for this move. I have a lot of fun with my friends here in Sidney, but I don't know a single one of them - male or female - that will make me that grilled cheese sandwich exactly how I like it and then jam a smallish ferret up their ass. Fistgrrl will!

Things are coming up Zack! She is probably going to murder me in several different ways for this update! I love you honey, please don't hit. Please, no, the hitting, no.

This week Livestock and the SA Forum goons take a stab at remixing some of the hottest collectible plates from the Franklin Mint. As always they are as tasteful and classy as can be! 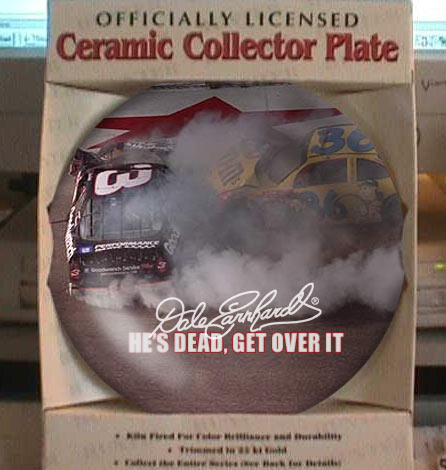 Head on over and check it out folks!