A Note About the Stickers

It's an accepted fact that all of us need to be defended. You, I, your grandmother, your cat, that homeless guy with the "WILL WORK FOR FOOD, GOD BLESS" sign with the word "GOD" spelled incorrectly, convicted rapists; we all need to have defense regardless of race, gender, occupation, or mental stability. This is where the United States government comes in. Unless you live in a non-United States part of the world, such as Antarctica or the Moon, the United States Army is sworn to protect you from foreigners, which is fortunate because all foreigners (by default) hate America and want to see it blown up as soon as possible. Why? Well I'll give you one hint: David Hasselhoff.

With your personal safety in mind, as well as the idea of seeing foreigners become more exploded that they currently are, the House has recently passed a $400 billion wartime bill. Here's the inside skinny:

Defying a warning from President Bush, the House of Representatives passed a nearly $400 billion wartime defense bill early Friday for next year that includes funding approval for the Crusader howitzer, the controversial weapons program Defense Secretary Donald Rumsfeld wants killed. Bush Thursday warned Congress against attempts to revive the $11 billion program and said that he fully supported Rumsfeld's decision to scrap the artillery system and seek alternatives more in keeping with the current threat facing the United States.

My initial response to reading this news was a bloated, burning pain in my lower stomach followed by horrible flatulence and the need to rush to the bathroom. No wait, that was my initial response to the Mexican food I ate last night. Regardless, the government has essentially passed a "$400 billion wartime defense bill" despite the fact that, as far as I can tell, we're not really engaged in any war. Sure we're still dropping bombs on huts and caves and churches in Afghanistan, but referring to that as a "war" is like calling a YMCA baseball team (or the Kansas City Royals) a "World Series contender." Besides, none of the crap included in the $400 billion bill even includes stuff that can be dropped on Afghanistan peasants while they harvest dirt with dirt-harvesting sticks, unless you think that we should be tossing out 45-ton tanks to fall out and land on them, turning the dangerous enemy farmers and ant herders into a chunky, gravy-like substances.

Debate over the multibillion Crusader has raged for weeks at the Pentagon and on Capitol Hill. Rumsfeld has called the heavy, tank-like vehicle a relic of the Cold War, better designed to battle the Soviet Union than terrorists in the Middle East or other modern threats. 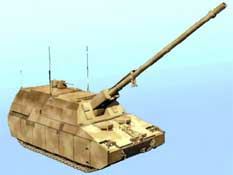 A photo of a Crusader Howitzer. Why is it floating in space? It's the miracles of technology of course!

Roughly $11 billion of this bill goes towards researching and producing a new type of mobile howizter unit called "The Crusader," which weighs over 40 tons, travels up to 42 miles an hour, and can shoot exploding things over 25 miles away. 25 miles! Do you realize how far that is? Just think of it this way: they could hold the Boston Marathon and only let two people enter: the world's fastest man (one of those guys on "COPS" that run so fast their shirt falls off and they are forced to use their orange foam hat to act as a drag chute) and a Crusader Nuclear Battle Tank. They would line up at the starting point, the race would begin, and the Crusader Nuclear Battle Tank would just tear out at 42 miles an hour, easily winning the race. Alternately, the Crusader Nuclear Battle Tank could just sit there at the starting point and wait until the fast guy gets near mile 24, at which point it'd launch some kind of exploding projectile at the guy, causing his various body parts to turn into various body part particles which are also on fire. I'm not exactly sure why the Defense Department would bother entering their Crusader Nuclear Battle Tank in the Boston Marathon, but I think we can all safely assume that it has something to do with our nation's security and safety.

However, the real "kicker" about the Crusader Nuclear Battle Tank is the fact that Defense Secretary Donald Rumsfeld, whose job it is to kill people and blow up people and blow up the killed people, doesn't even want the Crusader Nuclear Battle Tank. As far as I can tell, absolutely NOBODY wants the tank except the Republicans who represent states in which the howitzer tank will be assembled in. That's all fine and dandy if you want the people who vote for you to have new jobs, but maybe these representatives should lobby for more useful labor-requiring programs, such as governmentally-approved meth labs or a huge factory whose main purpose is to assemble those toothpick umbrellas which are placed in fruity alcoholic drinks. 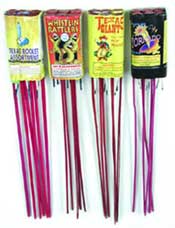 While this sounds just like a remarkably wonderful idea on paper (just like I'm sure "Caddyshack 2" did), there seems to be some major flaws in the system that permit it from functioning correctly in real-world scenarios. For example, it doesn't work. Other than that slight problem, it seems to be just great and can easily be considered one of the best inventions since George Foreman got beaten up by another fat black man and magically came up with the idea of a portable grilling device. To date there have been 53 tests of the National Missile Defense System, producing the following results:

So it doesn't take a rocket scientist (ha ha!) to figure out that the National Missile Defense System has the same chance of working as a Department of Motor Vehicles employee. It appears as if everybody in the entire world knows this except the US government, who is obviously too busy doing whatever the hell the government does all day, like figuring out new ways to tax cigarettes so they can earn billions of dollars off people who want their internal organs to slowly resemble miscellaneous car parts found inside a burnt up 1956 Buick Century.

While these two highlights are obviously the most important and functional part of the bill, there are still more gems located inside this governmental masterpiece. Here are a few of the special, limited-edition, bonus highlights now with 150% more Vitamin-L:

"Exempts military from some endangered species protection rules" - This is important because various environmental pansies have been griping about how many endangered species were blown up by miscellaneous army bombs, missiles, and anti-bird cannons. Now the government may proceed to explode any animal they like, which will undoubtedly be useful once the Tooth Cave Ground Beetles start launching their major offensive attack against the southern United States, although technically we don't really need Texas anyway. 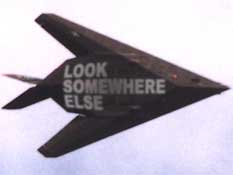 It's so stealthy that I think I'm looking at ABSOLUTELY NOTHING!

"Allocates billions for a new generation of stealth jet fighters" - Apparently our current stealth jets aren't quite stealthy enough, so I suppose the military will brainstorm some brilliant way to make them even more stealth-like, such as painting a huge sign on the bottom of each plane that says "HEY LOOK OVER THERE, AWAY FROM THIS JET!!!" Then, before they know it, all those filthy foreigners will be joining the ranks of the Tooth Cave Ground Beetles, fertilizing the turnips in the Devil's garden.

"Requires Pentagon to present a plan on how it can shorten time needed to prepare to conduct nuclear tests to one year" - Despite the fact that all forms of nuclear ANYTHING are pretty much frowned upon by every nation in the world, apparently we still need to do more tests on how things explode when we drop a nuclear bomb on them. Initial studies have conclusively demonstrated that "they blow up," but I'm assuming that the government needs much more concrete evidence before passing another $400 billion bill that will strap nuclear bombs to the back of every SUV in America. Either that or they'll start quizzing their existing nuclear warheads once every year to see if they know fundamental reading, writing, arithmetic, and history. I bet they'll score higher than many Texas residents.

"Accelerates development of pilotless planes for surveillance and attack" - These "pilotless planes" they refer to are those Predator unmanned surveillance drones that fly around the Middle East and, after detecting an enemy target, proceed to launch a Hellfire missile at the nearest church or abandoned sand factory. The military is big on pilotless planes because then they can blow up innocent civilians or babies or priests and when the press starts whining about how mean it is to make kids explode, the military just says, "hey, blame the pilot!" Then they call the pilot in to explain his actions and he's just a box full of circuits and wires. The press will hound it for a few hours, demanding explanations and answers, but the box will stonewall them and the press will eventually get bored and go back to their news station so they can write more stories about how everything in the world poses a threat to you and can give you cancer if you even look at it or even think about it in passing.

Now that this important bill has passed the House vote, it is sent to Congress where state representatives tack on additional amendments and bills to it such as allocation $55 million towards the research of blue tape or $120 million aimed at helping minorities cut their grass more efficiently. Then the bill goes somewhere else, like the Senate or something, and then it's passed to the President who then gives it to the Department of Blacking Out Random Words on Paper, and then it goes back to the House again so they can apply additional coats of varnish to it, and then the lucky bill IS OFF TO SUNNY HAWAII!!! This is the miracle of your government at work and you can sleep easy tonight knowing that there will soon be a few thousand inaccurate missiles and 45-ton tanks roaming the country and protecting us all. Let's see those nasty terrorists try to hijack a plane when we've got our National Missile Defense System and Crusader Nuclear Battle Tanks in action! Ha!

It's So Awful It's Gotta Be Superman!

Emily "Integral" Reigel has taken a look at what is easily the absolute rock-bottom WORST game to ever grace the hallowed halls of Something Awful. Oddly enough, this title happens to be one the biggest and most popular name in the comic book industry, "Superman." Yup, that's right, apparently DC Comics gave away the Superman licensing rights to whichever company could guess what number they were thinking of at the time. Don't believe me? Then check out a snippet of its ROM Pit Review and some SUPER screenshots!

Superman is, from all that I can gather, supposed to be based around the DC comic superhero who is by all accounts faster than a locomotive and can leap tall buildings in a single bound. A more or less invincible character wouldn't seem a very logical choice for a main character of a video game, and the friendly folks at Kemco and Nintendo seem to agree because they made their Superman a high-jumping pansy who has a tough time dodging fist-sized bullets which move at the speed of a very slow (but action-packed) electric wheelchair. The pain is unbearable.

This game is so unbelievably shittacular that we've bestowed upon it the highest possible award here at Something Awful, the coveted "Awful Award For Exceptional Failure in Every Possible Aspect." But don't take my word for it; read the eye-gouging review for yourself, dummy!