Mother's Day originally began to celebrate the life of the famed Mama Cass, but its true meaning was lost through commercialization in recent years.It's that time again everyone! The time has come to break out your wallets and show your appreciation for the woman who lowered her standards just enough to have sex with your ugly, abusive Father. No, it isn't "Filthy Homewrecking Tramp Day" -- it's Mother's Day! It's once again time to help keep the owners of Hallmark company swimming in both riches and Olympic sized pools purchased with said riches by buying cards for a holiday that the company made up for fun and profit. Each year at just about this time, we're all bombarded with advertising that leads us to believe that without purchasing flowers and candies and broaches for our mothers, we all designate ourselves horrible children and join the ranks of Hitler and Jeffrey Dahmer, who are two individuals notorious for really crappy Mother's Day gifts like homemade cards with construction paper hearts. But this article isn't about companies levying guilt on you to drain you of hard earned money. It's about that special lady that we all like to call Mom, and raucous black insult comics like to call "Yo mamma." Mother's Day is that special day where everyone sets aside time to love and cherish their Moms, except for those dirty, raggedy orphans. 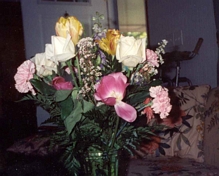 Women love getting bouquets of things, especially a bouquet of pain served up on cue when they forget to make dinner!We owe a lot to our mothers, especially you losers out there that still live with your parents. Where would you be now if a certain mother-type person hadn't made you with sex? Probably not Chicago, that much is certain. Mothers aren't just walking baby factories after all, they're so very much more. They cook our meals and clean our rooms, and provide all the luxuries that the emancipation proclamation so unfairly tries to deny us. That's why we have to take this day to appreciate these walking baby factories by providing vein, self serving, materialistic solutions to deep rooted emotional problems that could only really be fixed with years of therapy. "Hey Mom, here's some half wilted azaleas! That should make up for that time I robbed you for crack money during those awkward teen years, and also last week!" But I digress, because exposing this sham holiday for what it really is will make me look like a bad son. Instead, I plan to take the low road and just do what society tells me and exclaim how utterly fabulous mothers are! Note that I am not gay, and that I simply used the word fabulous for posterity, and a quick lead-in to a really bad gay joke. However, if you are gay and looking for some hot gay action, send a hot gay "e-male" to fellow writer Zack Parsons. I'm not saying anything...I'm just saying. Just kidding! I love you platonically Zack, really!

Honestly though, unless your mother is the woman responsible for the creation of the (Oxygen) network, she deserves all the love and praise she can get for putting up with your shit. Wiping your ass even once during the late hours of the night is sacrifice enough to earn themselves a holiday, and mothers are so good they'd still be willing to do it for you now if need be. Maybe I'm crazy, but I think this deserves some thought and care on your part. To get inspired, you just have to remember all that love garbage she showered on you in an attempt to keep you from becoming a rapist. Think of all the good times you had. Fishing, learning to ride a bike, playing football...then replace the memory of your dad from those events with the image of your mom, because she deserves a good spot in your mind on Mother's Day. 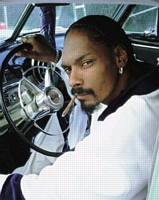 "Bad Mothafuckas" aren't traditionally embraced on Mother's Day.But what's an appropriate Mother's Day gift? I mean, cards, flowers, and candies are standard fare, but they're about as interesting as reading an article about mothers day on a humor site! So what can you do to be original and make your Mother proud that she didn't take that abortion offered by the shady Mexican med student? There's lots of stuff that you could do to stand out amongst the crowd, making the card your sibling made in his first grade art class look like mere child's play! The most important thing to keep in mind is your mother's personality and interests. If she's a homemaker type, I'm sure she'd just love a new mop and bucket set. If you're really thoughtful, you may even want to vomit on the floor from your alcoholic bender the previous night so she can try it out! Even though it isn't her birthday, you may want to think about getting her a hilarious "You know you're getting old" card, because who doesn't love a good laugh at their own expense? Don't be fooled into getting jewelry, especially expensive stuff. Girls secretly hate that. If you're gonna get her anything to adorn herself with, why not pay for a tattoo? It lasts a lifetime, and you know she can never pawn it for booze money like she can with gold or stainless steel. Some other ideas include:

Still, any good mother wouldn't want you to put too much pressure on yourself. Pressure results in stress and damaged submarine hulls, neither of which do anyone any good. Any time a holiday comes around, a lot of stress gets placed on people to have a great time and make everything sickeningly perfect. This of course always ends in disappointment beyond words because, let's face it, we are all terrible people who couldn't do things right if we tried. Unless you really, really hate your Mom, this isn't the best angle to shoot for. So instead of setting her hopes high this year, the best gift you could get your Mom is probably lowering her standards by telling her outright that she isn't getting anything. Sorry mom, flowers um...went extinct sometime last year. And chocolates too, they were all destroyed by fat people. It's for her own good...as the years go on, she'll thank you.