Too Much Information: The Unseen Deaths of Jet Li in 'The One' (Part 1) 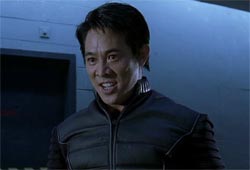 He has inside him blood of other Jet Lis. The 2001 blockbuster "The One" combined a smattering of alternate dimension superstring theory with the "quickening" premise of "The Highlander", but it was all really just an excuse so that Jet Li could kick a doppelganger of himself in the chest. As part of the plot of this movie an evil Jet Li (Yu Law) travels to 123 alternate dimensions to kill himself and thus become more powerful. The only thing standing between evil Jet Li and whatever superpowers he might gain from murdering all of his duplicates is the 124th Jet Li (Gabriel), who happens to be a do-gooder cop.

Most of the movie focuses on the climactic battle between Gabriel and Yu Law as they hurl motorcycles around and kung fu fight in the most dramatic settings the budget allowed. As for the 123 murdered Jet Lis, they are almost an afterthought. A couple of them are glimpsed in their moment of defeat at the hands of Yu Law, but we never even get to see what happens to 121 of them.

Jet Li 1 (You Laa) - Death by poisoning from grapes placed into his shopping cart at the grocery store.

Jet Li 2 (Josh Law) - Death by heart failure from "Concentration Flash Game" that switched suddenly to a screaming close up of a skeleton.

Jet Li 4 (Gabriel Banderas) - Struck down by thrown hatchet while recording the voiceover for a Nasanex commercial. In this alternate universe the Nasanex bee is considered the height of computer animation.

Jet Li 6 (Noodles Lah) - Only owned one necktie, which was surreptitiously replaced over a period of months with progressively longer neckties. Necktie eventually caught in escalator and strangled him.

Jet Li 7 (Eeoo Starkiller) - Death by impalement on three-foot steel spikes beneath suspended bridge. He was convinced by evil Yu Law that he was an expert breakdancer and entered much more competitive and dangerous alternate universe version of break off.

Jet Li 8 (Hampton Luh) - Evil Head and Shoulders shampoo from alternate dimension placed into shower. He was reduced to a pile of dandruff in seconds.

Jet Li 9 (Scrooge McLaw) - Tricked into committing suicide. Evil Yu Law became editor of evil Time magazine and voted him "Gayest Man of the Year, Decade and Ever". Shamed, he drove his Vespa scooter off of a slightly raised stage at a fashion show and was instantly killed by whiplash.

Jet Li 12 (Paisley Laa) - Murdered by third party after being tricked into witnessing a mob hit and then pressured into testifying at trial by evil DA the evil Yu Law.

Jet Li 14 (Bam Law) - Death by allergic reaction from cage of bees placed over head. He was a cop investigating a faked disappearance on an island that was ruled by pagan women.

Jet Li 17 (Stive Lawzalez) - Death by poisoning after being given entire bag full of potato chips with those green spots on them by evil Yu Law posing as Subway sandwich artist.

Jet Li 18 (Newt Law) - Evil Yu Law inserted "anyone can kill me with a shovel" clause into Senator Newt Law's Contract with Alternate Dimension America. Shot in face while sleeping.

Jet Li 21 (Hsu Hlaw) - Seduced by evil Yu Law in wig and then left in a motel bathtub full of ice with a note telling him that his heart was removed. Subsequently died from no heart syndrome. Myth confirmed!

Jet Li 25 (Oog Law) - Lived on terrible earth where meteor missed planet and dinosaurs still rule the world. Sent postcard telling him he won a vacation. Arrived at address only to discover he won a giant angry pterodactyl.

Jet Li 26 (Chuck Lah) - From alternate universe where everyone is tiny. Locked in room with over-excited Corgi puppy and crushed to death.

Jet Li 27 (Dwayne "The Law" Johnson) - Tricked into becoming so cocky that when People's Eyebrow was raised it tore skull in half.

Jet Li 30 (Goose La) - Powerful warlock. Bucket of water thrown on him by little girl from Kansas at the urgings of her friend, evil Yu Law.

Jet Li 32 (Lancealaw) - From alternate dimension where technology has only reached medieval levels. Defeated and killed in jousting competition by evil Yu Law in full plate mail mounted on a warhorse.

Jet Li 33 (Cobra Laaa) - From alternate dimension where men give birth. Run down by evil Yu Law in full plate mail mounted on a warhorse.

Jet Li 34 (Chet Law) - Fell to his death while taking pictures of family on vacation to Grand Canyon. Was so surprised to see medieval knight riding past that he toppled off cliff.

Jet Li 37 (Justice Law) - From dimension where Al Gore was elected president in 2000. He was a resistance fighter doing battle against Islamic rulers of America. Was beheaded by evil Yu Law under Sharia for eating slice of pizza without beard at least six inches long.

Jet Li 38 (Hepsebah La) - Lived in alternate dimension where all humans are made of rock. Submerged in river and violently eroded.

Jet Li 40 (Law Law) - Death by drug overdose. Found white goopy stuff in woods after meteor impact and decided to taste some. Turned out to be liquid horse tranquilizers left there by evil Yu Law.

Jet Li 41 (Yu Law) - The good Yu Law was a Parisian baker. Evil Yu Law suggested the American Congress change the "French" prefix for food items in the House commissary to "Freedom". As a result, France descended into anarchy and the good Yu Law's worthless stockpiles of French bread went uneaten. He lost his business, his wife and was forced to sleep in the gutter. He was then shot in the face while sleeping.

Jet Li 49 (Zipper Law) - Developmentally disabled and incapable of reading, Zipper Law identified street signs by their shape and color. Evil Yu Law got himself elected to the city council and had all stop signs redesigned to resemble library directions signs. Possessed of a singular hatred of written words, Zipper Law spent days on his bicycle trying to get away from the library before dying of thirst.

Jet Li 50 (Hsu Lsaw) - Death by de-chestification. Kicked so hard in the chest by evil Yu Law that time stopped and everything zoomed in on an X-ray of his ribs shattering. Chest kicked from his body.

Jet Li 51 (Bizarro Law) - From alternate dimension where everything is the opposite of what it is in our dimension. All matter and energy is regenerating as the infinite universe contracts back to a single point, sentient life has evolved on every planet other than earth, and him am wear his shirt backward. Him am kicked so weak by evil Yu Law him bones am imploding.

Jet Li 52 (Zoot La) - Ate huge meal and was then forced at knife-point by evil Yu Law to swim laps. Later shot in the face while sleeping.

Jet Li 54 (Nick Lug) - Jumped in front of a train after evil Yu Law kicked him out of his anime club only hours before the fan sub of the latest Asatte No Hokou was supposed to be released.

Jet Li 56 (Bob Loblaw) - From a dimension in which everything exists as a cartoon. Had two pianos and an anvil dropped onto head and was then disemboweled by a kick from Yu Law.

Jet Li 58 (Zoo Law) - Trapped in an alternate dimension where World War II rages on endlessly, he got an erection every time a V-2 rocket was about to hit. Yu Law launched thousands of V-2 rockets and induced the first death by priapism.

Jet Li 59 (Shang Law) - Sword master and kung fu expert, Shang Law dazzled everyone with his whirling blades. Evil Yu Law watched him spin and wield his mighty sword and then casually pulled out his pistol and shot Shang Law in the face while he was sleeping.

Jet Li 60 (Mega Law) - The fattest man in his alternate dimension and confined to his bed, he was slain when evil Yu Law lit more than a thousand aromatic candles in his bedroom and suffocated him with the scent of whole bean vanilla.

Jet Li 61 (Leeloo Lee Law) - Was a transvestite streetwalker in Los Angeles when the evil Yu Law paid him for a hand job and then ejaculated a laser beam through his torso.

There were also two Jet Lis not included in Yu Law's murder spree that died of natural causes. Jet Li 126 died from eating a bad pickle and Jet Li 127 put a plastic bag on his own head as a joke and suffocated to death. A Jet Li 128 was conceived, but he ended up as a miscarriage when his mother rode a rollercoaster during her fifth month of pregnancy.

Part two of this edition of Too Much Information will be appearing Monday, when we bring you up to speed on how the evil Yu Law's power grew through the murder of his alternate dimension duplicates. As his strength and abilities improved the ways in which he dispatched his doppelgangers became increasingly spectacular.