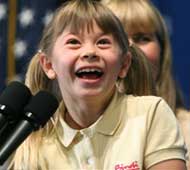 Christ, look at the bags under those eyes. Let the girl sleep! I never know how to start these updates so let me just get to the heart of the matter.

Okay, so maybe hate is too strong of a word, and while attacking an 8-year-old girl isn't exactly the best way to win friends and foster relationships with advertisers, I'm telling you, there's something not right about that girl.

I know what you're saying, "Hey Hassan, she's only 8! Are you crazy?!" I don't know, man. I just get a sinking feeling in my chest every time she is on TV. Every question answered in that innocent and naive tone makes me cringe and I have to look away from the television. There's no escaping it. We are in the eye of the Bindi mania media hurricane. She's on every channel saying that her daddy is the best daddy and that her daddy always told her at the dinner table, "Bindi, I'm soooo proud of you!" Really? You'd think once in a while he'd tell her to pass the mashed dingo porridge or whatever the hell they eat down there.

Don't misunderstand me. This isn't an article about how she's being exploited by her mom or the media or some such nonsense. If anything she's exploiting us! They expect us to buy that godawful DVD of hers because her wacky zookeeper father angered the ocean and got what he had coming to him? Aw hell naw. Well gosh, her dad just died and she's so adorable. It's only $9.95? Okay here you go. You know what? Don't even give me a DVD. Just keep the money. Poor kid...

Please??? Fuuuuck! I know it can't be healthy to have this kind of reaction to a child but hey, here we are. Maybe I'm just taking out my hatred for Australia on this overnight media darling. You know, we've been giving the French a hard time for a while now and it's about time we focus our hatred on Australia. Australians are worse than New Yorkers with their "better than your city" mentality. They come over here and talk about how wonderful Sydney is and how beautiful the countryside is and I just want to strangle them. Go back there if you love it so much! If I have to hear about that goddamn Opera House again I'm going to rip my own dick off. It's like they only come here to see what a crap country looks like. I'm willing to admit that some of my hatred stems from jealousy but I think it goes much deeper than that.

There are in fact two Australias. First there is the continent of Australia, which is a vast and majestic landscape where fantasy action movies are filmed. Then there is the country of Australia, which is in a never ending state of separation anxiety. It's practically disconnected from the rest of the world. The subject of continents comes up very often in my daily life. Heavy hitters like North America, Europe, and Asia often dominate the conversation, followed by South America, Africa, and even Antarctica. Australia is always mentioned last, if at all. 40% of Australia's national budget isn't devoted to things like defense or social security, but to ensuring that the rest of the world doesn't forget they exist.

Australia has always craved the approval of the United States. They look to us to fly our asses down there in the winter (You mean it's Summer down there?! That's like witchcraft!!!) and stare at their coral reef all day. They had a good thing going with Crocodile Dundee, they really did. But then our infatuation with the land down under sort of fizzled out suddenly and like a scorned ex-girlfriend Australia didn't understand why. They would constantly call us and we'd tell them, "Look, it's not you, it's me." and hope that they would go away. The calls would become so frequent that we'd have to change our number. Then along came Steve Irwin. Here was the real Crocodile Dundee. It was like Australia got breast implants and suddenly we were interested again. 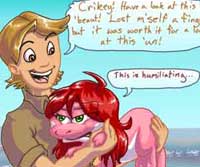 Not even Yoshis were exempt from the Crocodile Hunter's constant harassment. Sure, he did a lot of good for the conservation effort. He bought up tracts of land on multiple continents to build nature reserves. He hoped to educate the public on the animal kingdom and bring to life a world that most people never see. But that's not what he's known for. That's not why we remember him. No, we remember him as the guy who loved to annoy the ever loving shit out of crocodiles.

On his hit TV specials he would often wrestle dangerous crocodiles to the ground, displaying his obvious superiority over a creature that was built to chill out 99% of the time. He has been criticized for taking his hands-on antics to the extreme, disturbing nature and wildlife in the process. In one episode Irwin interrupted two rhinoceros' making love. He then proceeded to stick a camera in the female's humongous rhino vagina and scream his trademark catchphrase. Suffice to say it was a debacle. She was so embarrassed by the incident that she decided not to mate, further endangering a class 7 endangered species. Sure, he's done a lot for the conservation effort, but I'm sure a few crocs were like, "Who's this asshole jumping on my ass?" when he showed up on the swamp.

Now I'm not saying Steve Irwin is a bad person, quite the contrary actually. But let's be realistic here. I mean, here's a guy who wrestled reptiles on TV and Australia sent him to his final resting place as if he were the freaking Pope. Their Prime Minister gets less of a reception than this at his funeral! Australia wanted to crown this wackjob and worship him as their king!

Meanwhile, here in America, let's face it, Irwin's popularity was waning. Everybody was watching him just to see if he would get killed in action and the more he didn't die the less people wanted to watch him. It got to the point where the guy wasn't even getting injured. A sprained ankle, a bruised kneecap, throw us a bone here!

Of course the problem was that Australia's popularity in America, and in effect its tourism industry, is directly tied to Irwin's popularity. What is a Prime Magistrate of Tourism to do? Simple, just give the people what they want!

Eh, it's Canada. I can feel the breeze of a million double-takes right now. You read that right. The government of Australia, in their bloodthirsty quest for attention, had Steve Irwin killed in the name of tourism. The Prime Minister instructed the assassin himself. The only requirement? Make it look like an accident. Friends, it was no accident. On that warm winter day a trained stingray was sent after your beloved Crocodile Hunter. Though Irwin knew how to handle a wild stingray, he was no match against a professional.

And Bindi knew about it all along.

It is the final step in the G'Day USA tour, a national media campaign designed to promote Australia as a premiere tourist destination in the world. Appearing on such shows as "Good Morning America" and "The Late Show with David Letterman", Bindi works overtime extolling the virtues of Australia, all on the coattails of her father's well-publicized fatal accident. We can't help but want to drop everything and book a flight to Sydney right this instant on the "Stingray Massacre" package which includes all the stingrays you can slaughter in the name of justice. Now that's a good value.

I am well aware that Steve Irwin is a kind of goon hero and that attacking him and his daughter will cause me to lose many points with the neckbeard community. But I stand strong, determined to rid the world of the misinformation and outright lies that have surrounded this international event. It took a real man to do what the blogosphere couldn't do, attack and ridicule an 8-year-old girl and her deceased father. We understand that our readers wouldn't expect anything less from Something Awful.com.