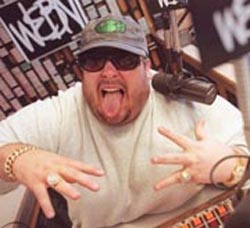 Their fearsome visages and blood-curdling war cries strike fear into the hearts of those who meet them. On December 12th of 1901 Guglielmo Marconi raised a kite-antenna from Signal Hill in Newfoundland and received the first transatlantic wireless communication from a point over 3,000 kilometers away. Seconds later, Marconi offered to present Captain Tillinghast in England with a gift certificate for Strapping Paddy's Beef Fritters in New York. All the Captain had to do was insert a live electrical wire into his urethra and hold it there for thirty seconds while wearing a sign around his neck declaring that he was, "The foremost and plumpest rectum podger".

Captain Tillinghast agreed and was instantly slain. His death resulted in the first lawsuit leveled against a radio broadcaster. Marconi managed to win the case by asserting that Tillinghast's death was of the sort one might find at "any lodge jape gone awry". As a result of the case's outcome, Tillinghast's death was a largely forgotten footnote to the realization of transatlantic wireless technology.

Until Friday, the 12th of December, when a 28-year-old mother died drinking water as part of a radio station's Wii giveaway contest. The videogame console was to be awarded to the person who drank the most water without urinating. DJs at the Sacramento KDND 107.9 "The Dungeon Masters" station claimed to be ignorant of the dangers of water toxicity.

Then all of them were mysteriously fired, as well as staff members at the radio station, people they had met recently, telemarketers that had called their home and several of their pets including a red pony. Then the police opened an investigation into the contest after it was revealed that several callers to the on-air stunt warned the DJs that chugging water could be deadly. It turns out those callers were either laughed at by the DJs or cut off with a loud fart sound followed by a honking horn.

In an online recording of the show, the DJs can be heard making comments joking about people dying from water intoxication, even discussing a case in Northern California two years ago in which student Matthew Carrington, 21, died after drinking too much water during a fraternity pledge.

One of the DJs even admitted they maybe should have done some research before the contest.

One female caller, who identified herself as Eva, also phoned in to warn the radio station that drinking too much water can kill. 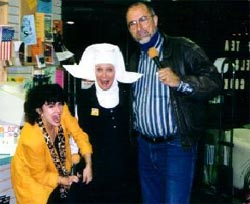 Even their wackiness conceals more horrors. The general public was horrified to hear of this tragic incident, but this sort of thing happens quite frequently. Whether it was the involvement of Nintendo's Wii or the bizarre manner of death, this incident has received much more media attention than most radio promotions gone wrong. Since Marconi's offer to Captain Tillinghast here have been more than twelve thousand deaths linked to radio promotions. The situation has become so bad since the 1980s that morning drive time DJs have earned the nickname "Wacky Morning Death Squads" from various people I imagine I am talking to when my eyes are closed and I'm alone in bed.

The history of radio promotions is one that closely parallels the tragic history of the Native American tribes with all of the death, small pox and charging cavalry that entails. Truly, participating in a radio promotion is not an activity to be undertaken lightly. Even the most seemingly benign promotions can result in mass death and destruction. Four people were shot and killed when San Diego's HHHN 101.7 "The Hhhhhhhnnnnggg" children's radio station offered free tickets to Babar on Ice during a remote event. The irony of the incident, lost on many, is that Babar the Elephant refuses to use firearms, favoring the personal gratification of knife work and the reliability of a broadsword.

One of the most recent instances of a radio promotion gone horrifically wrong occurred in 1997 in Ellington Quay, Florida. Radio station XCTL 102.7 "The Xochtl" and their morning drive time show "The Laff Canticle" held a contest called "Valves for Verve Beatoff". 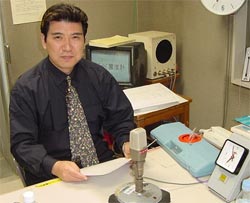 The most terrible of the morning death squads are those who appear calm and entirely non-wacky. DJs Thornton Goober, Big Puzz, Jenna and Ol' Stinker offered tickets to an upcoming Verve Pipe concert. In exchange for six tickets to the concert contestants were asked to see who could survive on the greatest number of implanted artificial heart valves. Bids for the tickets were placed blind so that contestants were not actually competing with one another. Most chose two to three valves. To ensure a victory, Tom Trent age 19 wrote on his entry card that he would accept 850,000 artificial heart valves in exchange for six tickets to the Verve Pipe.

The tissue of his heart could only accommodate approximately 40 artificial valves. At the urgings of Big Puzz and Thornton Goober, Doctor Isaac Salk of Ellington Cardiac Center installed artificial valves throughout the entirety of Tom Trent's body. The 72-hour long surgery was broadcast live on the air with Big Puzz providing remote coverage during the drive time hours. After completing the surgery Trent's heart beat once and expelled all of his blood from the 50,000 valves on the outside of his body. This was followed by several honking horns and a sound clip of Casey Kasem getting angry about playing an up-tempo song after a death announcement. 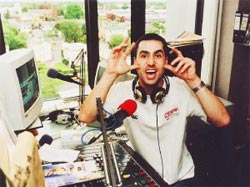 They are a plague upon our once-great nation. 1967 - Bellwort, New Jersey's 97.4 WHET "The Wheat" gives away a bushel of wheat to each participant that turns in a murder weapon to a police gun bank. Bread makers beat dozens with rolling pins, two are killed.

1972 - Slurdfast, Ohio's 101.3 MVOL "The 1000 Volume" offers tickets to Dolomite Caverns to the person who can eat the most burning magnesium. Seven participants reduced to molten slag. No one can eat burning magnesium so tickets given to staff members.

1978 - Hurningng, West Virginia's Q88.1 "The Quibble" and its popular morning show "Treble the Quibble with Bubble and Scribble" hold a contest in which participants are asked to guess the weight of a brown bear with their tongue. While no one dies, more than 100 are rendered mute and/or faceless.

1983 - Detroit, Michigan's 92.3 JMMJ "El Jumanji", a Mexican language station, celebrates the Day of the Dead in 1983 by giving away half pound stainless steel ball bearings designed for the turrets of battleships. They distribute them to listeners by dropping them from the cargo bay of an airplane that flies over the city. 122 are killed and more than 1,000 suffer broken bones. Apologia not accepted, senor!

1990 - New York, New York's 89.9 RWRM "Rock Worm" holds a raffle for an all-expense-paid trip to Newark's Bauxite Coast to the first person who can impregnate a spider. While no one dies as a direct result of the promotion, several million half-human spiders are hatched throughout Manhattan and by 1991 the Army is called in to wipe out the menace. Thousands die at the hands of the spidermen and their overlords (and former RWRM DJs) Hooch, Skleebler and Gunt Mouth.

2005 - XM Satellite Radio's 244 "The Time Chunnel" offers tickets to Avril Lavigne for the listener who can swallow the most Advil tablets. "Advil for Avril" kicks off in July and by June more than 600 people have been hospitalized for liver failure. By the contest's end in March fewer than 100 XM subscribers are still alive.

The moral of this story, and the tragic story of the woman struck down by water, is that you must never trust drive-time DJs. They will do anything, regardless of loss of life and limb, to promote their shows. As 1920s evangelist Roy Skoot once said, "Radio is the devil whisperin' in your ear." Although, I guess take that with a grain of salt since Skoot was later found with a basement full of dead children, but it's one side of the issue.