I Went to Cambodia and Took Some Pictures

A couple of weeks ago I went to Cambodia. Cambodia encompasses a low flood plain between former war zone Vietnam and deceptively peaceful Thailand. It is hot, tropical, and there are enough landmines to kill a couple major US cities while still having a few left over to mutilate three or four villages worth of peasants.

Here are some pictures I took: 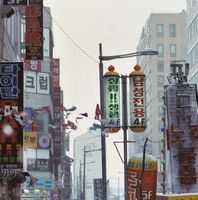 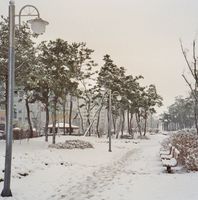 That is not Cambodia. That is Korea.

It was snowing in Korea, the first time I had ever been in falling snow. We had a thirteen hour layover there, our last chance to savor being in a country with hospitals that won't accidentally kill you while trying to set a broken leg.

Korea smelled frozen and pungent, like the snow that was falling was piped directly from ice in a supermarket fish display. We took a walk through the city around the airport. It was not Seoul, but it was near Seoul, kind of like how the Los Angeles airport is actually next to Inglewood. Apparently Koreans consider the place dull and ugly, but it seemed ok to us. I bet Inglewood wouldn't be so bad either if it was completely blanketed in snow and the only thing you'd had to look at for twelve hours was the beige back of an airplane seat.

Korea's other notable landmarks, based on my personal experience:

These were all diverting in their own way, but we were excited to be finally on our way to Cambodia once our 13 hours were up. This is Cambodia: 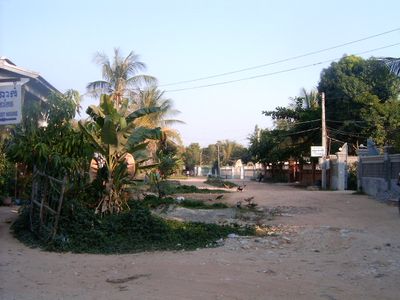 This is the street our guesthouse was on. On the left side of this dirt road was a hotel with free wireless internet and great pancakes. On the right side was a pizza place. Flocks of chickens crossed back and forth between the two and no one had the cultural background necessary to ask them why they did it. Welcome to Southeast Asia.

The Angkor Wat is the world's largest religious building, taking up the entirety of a 500 acre island surrounded by a 600 feet wide hand dug moat. The Angkor What? is a bar in the town nearby that I stole the title for this section from.

Most people go to Cambodia mainly to see the Angkor temples, a series of extraordinary monuments built by the Angkor civilization around a thousand years ago. None of the temples have quite the impact that the five towered Wat does, and it is consistently breath-taking, no matter which angle you look at it from.

There are two entrances, but only one is open to tourists. This one can be easily identified by the massive herds of destitute children brandishing postcards and cheap bracelets and a startlingly complete knowledge of world geography. They know more state capitals and population figures than even the sharpest graduate of American fifth grade. If you claim you are Irish, they will greet you with a disconcertingly accented "top of the morning to ya." A German lawyer we met assured us that they are capable of offering knick knacks in near fluent German. Think what you will about the Cambodian school system, but they clearly turn out souvenir selling machines.

The Angkor Wat is so overwhelmingly beautiful that I won't bother trying to talk about it in a humor article. Instead I will show you pictures of two particular points of interest: 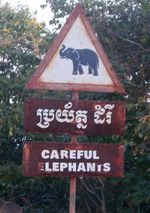 At the end of our ride, one of the other elephant drivers (still on his elephant) offered to take our picture. Diana handed him our digital camera and he puzzled over how it worked, taking picture after picture of his own legs and the ground beneath him in the process. Just as he got the hang of it, the elephant beneath him took the largest, loudest piss I have ever heard. A few small swimming pools worth of water took the saffron plunge to the (now very muddy) dirt below. Right around when the driver took this picture, the massive steaming avalanche of feces was beginning.

"Here you go," he said, and gave us back the camera. We smiled through the rising fumes and managed an "a-kon", which is Khmer for "I'm trying to say thank you but I don't speak the language and this elephant dung is choking me."

"No problem," he said, and rode away. 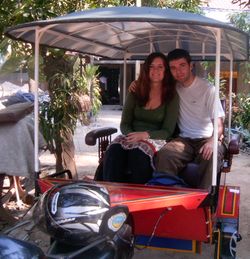 A tuk-tuk.Cambodian traffic is a lot like American traffic if every driver on the road was blind and had just sprayed hot coffee directly onto their genitals with a high-pressure hose. A left turn in Cambodia works like this: the vehicle pulls all the way over to the left of whatever road they are on and then turns directly into the face of oncoming traffic. The motorcycles or bicycles that were suddenly displaced by this maneuver work themselves out, or they don't and there is a crash. Either way, no one else on the road is fazed, or, more importantly, slowed down as the tuk-tuk that turned left weaves its way over to the right where it is, theoretically, supposed to be driving.

The role of the tourist in this situation is to keep a terrified death grip onto the side of the trailer until a passing truck comes close enough to shave a few layers of skin off his fingers. Meanwhile the Cambodians, most of whom drive motorcycles they refer to as motos, never seem to notice that they are driving the way Americans do when they are involved in high-speed police chases that will end in several deaths.

Women in Cambodia ride these motos side-saddle. I saw a woman sitting on a speeding moto like it was a park bench, dangling one foot out and bouncing her slip-on shoe idly while she used both hands to rummage through her purse. No one wears helmets, and three year olds ride motorcycles by standing up on the seats in between the adult passengers.

On our way to the airport the day we left Cambodia, we passed two different fatal crash sites. In both cases, every moto on the road was driving right though the wreckage without slowing down at all. I wondered how many accidents in Cambodia have been caused by crashing into other crashes, and then held on a little tighter to my tuk-tuk seat.

Please join me in two weeks when I will be sharing more of my experiences being a dumb tourist in a third world country. Featuring stories about tourist traps!, the French!, and the world's greatest warning sign!!. If you would like to email me about these subjects (or anything else), send it to maxnmona@somethingawful.com.