A Journey to the Future 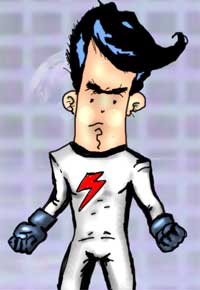 "Holy moly!" I shouted as I rushed out of the alleyway into no less than the future. A crowd of nearby futurists had gathered, obviously admiring me for my astonishing accomplishment of time travel, which I was about to explain to them since they didn't really know what I was shouting about.

"I'm from the future," I told them in an excited manner. "Well, actually the past. I mean the past. Sorry, I meant to say the past."

"The past?" inquired a dapper man wearing a silver jumpsuit with a glowing lightening bolt insignia on his chest. "That explains the hideous outfit you're wearing. You look like a museum's miscarriage, which doesn't even happen anymore because of the advancements in museum science."

"Through methods unknown to me I have ventured from a past era to the future, or as you call it... the future!"

"No, we call it the present," responded an angry lady wearing a robot skin coat.

"It may interest you to know," the jumpsuit clad man spoke, "that we have a crater named in honor of your Bill Cosby."

"No, the moon. Here. We stopped living on the Earth ages ago because it's full of jerks. And also vicious man-eating aliens. Jerks, mostly."

"You mean I time traveled all the way to the moon?"

A hardy looking man belted out, "Sure, why not!" He looked stately in his plaid exoskeleton, and his neon moustache was positively glowing.

"No, not really," said the hardy man. "Someone left a banana peel on the timeline and you slipped. Big deal."

"Time travel is nothing new," said the man in the silver jumpsuit. Adding, "It's a thing of the past, really." They all nodded in agreement.

"Oh," I said, feeling as defeated as a P.O.W. camp full of captured high school dropouts without the life skills necessary to survive in the harsh emotional prison camp conditions of the future.

The day I was sent forward in time was a day unlike any other, specifically because of the time travel part and also because I had gotten extra hash browns with my breakfast. With a stomach full of hash browns the future is harder to swallow than ever, and that's something you rarely ever sit down to think about until you find yourself in the future digesting hash browns that are suddenly older than your grandma.

As I walked the future streets of the future city on the moon, I couldn't help but notice the beautiful view of Earth resting just above my head behind the saw tooth cityscape in the horizon. In the distance great radio towers broadcasted sausage diagrams into space, hoping to lure intelligent and hungry life out of hiding. Signs and animated billboards gave the place an eerie feel as they depicted an endless slideshow of giant staring faces. This was the kind of persecution fish must feel living in aquariums. Were the TVs watching us now? And hey, how was there an atmosphere on the moon?

No more than ten minutes after venturing into the future, an elderly bum accosted me. One would like to think that in a world as developed as the moon, in the future no less, that homelessness would be a thing of the past.

"Hey," he said while his right arm made spastic punching motions. "Hey, craterface!"

"What do you want?" I asked, making a point to stand out of distance of his swinging right arm.

"Got a handout for a poor Moonling?" His tattered chrome secondhand Hercules-Transmag-Bovine Corporation uniform was smothered in all manner of moon refuse. I shudder to even mention the disgraceful condition of his cape.

Reaching in my pocket, I removed seventy-five cents and placed the coins in his open hands.

"What in the hell is this supposed to be?"

"Money," I nervously replied in a confused voice that carried the weight of a birthday cake with an Alzheimer's-stricken stripper inside it.

"Well what did you want me to put in your hand?"

"I wanted you to pee in my hands. That's how we do business here." He formed his hands into a cup as he said that.

"Look, I figure a fellow like you is probably from the past, and this future business is probably quite frightening. You help me out and I'll help you find your way in this topsy-turvy future – in the present tense, mind you."

I don't know what convinced me to urinate in that old man's hands, but I like to think it was trust in the underlying compassion and goodwill of humanity. In many ways, the cup is a metaphor for our lives. It's an empty container we fill with experiences. When it was all through, and all my urine – my Lucifer's Gold – had dripped through the grips of his fingers onto the street below, he smiled a smile so wide the rings of Saturn were probably quite jealous. The bum was old and probably dangerously close to his expiration date. I filled his cup one last time, and now he was going to fill mine for the first time, although not with his old man urine.

"Okay, yeah, well just head over there to that building," he said as he pointed his wet hand in the direction of the building immediately behind me.

The biggest building, which stood out in dramatic fashion because of the golden hologram statue of Bill Cosby in front, was the The City of Moon City City Hall. I entered through the revolving door entrance, which I noted reacted much differently than revolving doors of my time because of the different gravity of the moon. In the interest of science I went around about eight times before finally deciding to remain indoors. 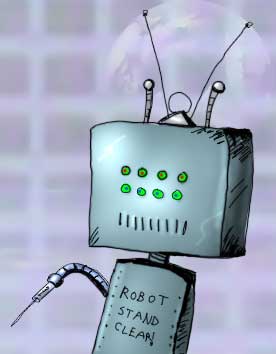 "Excuse me! Excuse me!" I pleaded for attention at the main counter. Immediately I was terrified. There came the robot, a hulking metallic husk of unknown intention and thought. A genuine scientific marvel standing in front of me, staring away with artificial eyes that sliced into my face like an exceptionally sharp piece of cake. My reaction was delayed, in part out of unbridled astonishment, in part out of unbridled disbelief. Like kindling before a scorched earth, I feared my very existence was enough justification to send the robot spiraling out of control in a calculated pre-programmed fit of madness.

"Please, Mr. Robot, do not hurt me," I cried, trembling ever so slightly.

Like digital wind chimes, a cacophony of beeps rang out from the secret circuitry hiding behind that cold metal face. Each beep seemed only to trigger another and they flowed out like water from a leaking faucet, dripping constantly but never in any set order. All random and rogue, these sounds flanked me, spilling into each of my side-mounted hearing devices. I was so unnerved by the cascade of beeps that I shrieked, letting out a whistling scream that carried a tremendously girly connotation. I was emasculated by nothing more than the beeps of a machine, though the machine could undoubtedly damage me in some perverse fashion. What electronic whim would it take for it to produce an origami swan out of my spinal column? I wondered as I used both hands to cover my mouth in hopes of preventing future shrieks from escaping.

"Excuse me, young man," interjected a kindly janitor shooting debris on the floor with a laser pistol. "The robot teller does not understand girlish shrieks."

"I'm from the past. I need to speak with someone about my condition."

"Well, why didn't you say so?" he inquired as he shot at debris around my feet with his laser without ever taking his gaze off me.

"I was distracted by this robot. Please don't shoot me."

"Well now don't go getting in a bunch. He just wanted a urine sample. But be a prune if you want! Go up to the top floor – floor 572. The stairs are at the end of the lobby."

"Is there an elevator?"

"A what?" he inquired in queer confusion.

Thank the godless forces that created perfect order out of the universe for the moon's reduced gravity, as it was much easier to just jump to the top. There I found the office Time Traveler Registrations.

"Hello, I'm from the future!" I shouted in triumph, feeling that my journey was finally at the start of its logical conclusion. 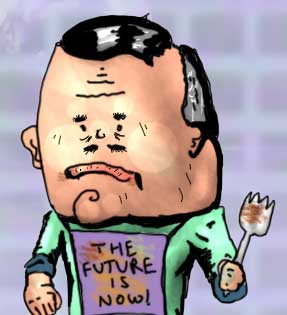 "You're under arrest, god damnit!" shouted a fat man in a wheelchair loitering behind the sideways monolith he used as a desk. There was a freshly cooked turkey on it, and he seemed amply poised to eat it, what with that giant fork in his hand and all. He was also wearing a filthy bib that read, "The Future is Now!"

"Time traveling into the past is illegal! You should know that. You of all people, from the future, trying to ruin your own timeline!"

"I meant I'm from the past. Sorry. I came from the past by way of a strange occurrence I shall tell you about in lurid detail!"

"No, it's my job. It's pretty routine these days."

"Well I have knowledge of the past. You see, this moon is a lot like the world I come from – Planet Earth. While Earth doesn't have a light or dark side like this moon or that turkey, it has white and black people. Once those people went to war – sort of – in a civil war to defend the rights of freedom of every person to be free, regardless of color."

"Thanks," he said as he wrestled a drumstick free from the turkey's glistening body. "Not interested, though."

Frustrated, I grabbed a shiny metal object off his desk. "This calculator—" I started to say.

"That's not a calculator. It's for monitoring my glucose."

"With this calculator I can calculate an endless number of ways to bring you down. That is, if you don't work with me."

"You should probably be heading back to the past about now."

"Isn't that illegal? And I can help your scientists."

"I doubt it, they went to school and all that. And no, it's not illegal because this already happened in the past and present, okay?"

"No, here, I'll make you a time portal. Which time zone are you from?"

"What differences does that make?"

"If I mess up the time zone you could end up having to wait around awhile for TV shows and things to happen."

"Okay, off you go!" he said as he tapped some buttons on his glucose monitor and made a time portal appear. Reluctantly, I stepped in and returned to the present day with scarce knowledge of the future save for that it was disappointing and full of assholes. The future sure was anti-climactic.