One of the more disturbing and frustrating aspects of my life has always revolved around the cruel, harsh fact that I have never really communicated with my cats on a deep and meaningful level. I've got two wonderful and fully furnished cats constantly lurking under a piece of something somewhere in my apartment, and although they've lived with me for years, we have never truly had an actual conversation. I'll admit that I've spent plenty of time talking to them, barking dictator-like commands such as "stop that" and "oh god, stop that" and "FOR THE LOVE OF CHRIST, STOP DOING THAT," but we've never held a real moment together. I recently felt this one-way relationship was invariably headed for disaster, and since the cats displayed no motivation in altering our course of destruction, the future of the companionship rested in my hands and my hands alone. As anybody who has been in a rocky relationship would naturally do, I immediately went to the Citgo gas station and purchased some Laffy Taffy to steal some of the jokes for this webpage. On this particular day and hour, the blessing of our Lord and Savior (James Woods) was upon my head, as there, resting next to the cash register and below a promotional advertisement featuring some mythological creature composed of what appeared to be expired sperm, sat the solution to all my problems. I am, of course, referring to the mini-magazine, "Cat Talk." 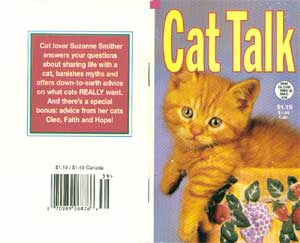 As you can see from the cover of this majestic work of literary art, it's about cats. You can tell because it has the word "CAT" in big letters at the top and there is a photo of a cat below the word "CAT." I'm sure that if the author had her way, she'd force the store clerk to say "this book is about CATS. CATS. CATS." to each person who passed by. I do not know why the cat is pictured crawling out of a horrid work of bowl pottery gone even more wrong, but I'm assuming the enigma was used to mentally prepare the mini-magazine's readers for the horror and surreal landscapes of terror contained within "Cat Talk." One of the book's major selling points printed on its back include "a special bonus: advice from her cats Cleo, Faith and Hope!" If that wasn't great enough, and let me say that I was already sold when I saw the cover and tried to come up with reasons as to why somebody would shove a cat into some highschool pottery experiment, the white text is located inside a red box. But hold on, it gets better: that red box is then inside TWO BLUE BOX OUTLINES! Only in this day and age can we see such a rainbow of colors on a single printed page! I had never heard of world-renowned author "Suzanne Smither," but I was obviously familiar with her cats Cleo, Faith, and Hope, three of the four leading cats on New York's literary circuit. The other leading cat is dead and buried in a shoebox underneath a trampoline. You'll also notice that the mini-magazine cost $1.19, which you can be damn well sure I'm using as a tax write off. 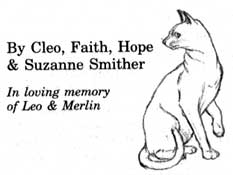 Thank you for all your hard work on this book, cats. I don't know who the hell this "Suzanne Smither" character is, but I hope the floozy rots in hell.

Coming into this book, I naturally hoped I would learn how to talk to my cats. The book is named "Cat Talk," leading one to assume that the manual revolves around talking. Talking to cats. Or vice versa, although I cannot image why somebody would publish a book explaining to cats how they can better communicate to their owners. I don't even know what language cats can read in, but I'm assuming it's some crazy wacky language like all the oddly-labeled buttons that do god knows what on those silly "Star Trek" TV shows. Weighing in at a mere 66 pages, I gave myself a few weeks to read and take notes on this masterpiece. Unfortunately these notes burned down during the Great Robot Invasion of May 12, 2003, so I had to just base most of this article on things that I randomly underlined and inserted witty, colorful phrases such as "WHAT THE FUCK?!?" around.

"Cat Talk" has no problem cutting to the chase and giving the readers the "meat and potatoes" of "Cat Talk," which is "Cat Talk." Wait, I mean it's the chapter labeled "Cat Talk" located inside the book named "Cat Talk." I'm sorry this is so terribly confusing, but you must remember that I'm referring to a book about cats here, so some of you may not be able to follow along. If you ever lose track of what's going on, please call the local branch of MENSA and ask if they'll shoot you in the head for $20 and a Denny's coupon. "Cat Talk" kicks off to a great start, asking the following deep and philosophical questions:

"Despite the growing popularity as pets, cats remain creatures of myth and mystery. Are they aloof and self-sufficient or affectionate and sociable? Can they see in the dark, see colors, see beyond the mortal realm?"

First off, I didn't know cats were still considered to be growing in popularity as pets, especially since cats have been popular pets since, oh, like 40,000 BC or so. Did you know that the ancient Egyptians worshipped cats as gods? You probably did, because any idiot who's ever passed by the Discovery Channel is well aware that the ancient Egyptians loved cats almost as much as they loved inventing the sun dial or the sun or maize or whatever the hell else they did. You'll also note that the ancient Egyptians are all dead as of today, May 13th. I'm not trying to pass off any direct correlation here but hey, those are the facts.

After blundering through the first sentence, Suzanne Smither immediately tackles the "hot topic" that many people have been wondering ever since they first walked into the gas station and saw her "Cat Talk" book: can cats "see beyond the mortal realm?" Sadly enough, she never quite answers this question, although perhaps there's a sequel to "Cat Talk" titled "Cat Talk 2: The Revenge" which deals with the whole cat / mortal realm fiasco. I personally do not believe cats can see beyond the mortal realm, and even if they could, hey, what's there to see? Oooooh, a really dark room with a dry ice machine pumping out artificial fog while some guy with a sinus infection talks through a microphone with too much reverb, oooooh. Tell me this, Miss Smarty Cat Woman, if cats could see beyond the mortal realm, why the hell would they be so fascinated with chasing goddamn laser pointers? Is Suzanne Smither trying to insinuate that the afterlife is less exciting than a $7.99 piece of plastic sold from Best Buy? I certainly hope not, because I plan on dying soon and if this is the payoff, then I might as well not bother, no matter how loudly my parents may protest.

The next page, which is numbered "6" because "Cat Talk" takes the creative liberty of beginning the book on page five, reveals a shocking discovery: "The authors, three brilliant cats and a reasonably intelligent woman with more than 20 years' training as a feline companion..." Yes, that is correct, "Cat Talk" was penned not only by a 20-year veteran of cat ownership, but additionally her three cats! This really boosted my hopes that I would finally learn the secrets to communicating with my pets, as this bridge of dialogue could only be patched by the direct advice of felines themselves, in printed format sold at a gasoline station of course. I was confident I would finally learn the magic of cat talk when I flipped to the next page and was violently awakened from my ignorance-induced slumber by the following revelation: 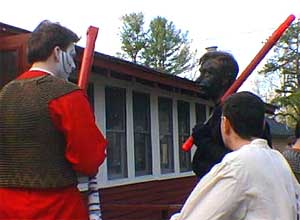 Although these two cats are talking, although it's not exactly what we're aiming for here.

CHAPTER 2: SHARING A LIFE WITH YOUR CAT.

Yes, that was the end of the fucking "Cat Talk" chapter! That's it! Less than two pages, one of which suggests cats can see dead and another claiming cats can write short novels, and not a single mention of how to TALK with your damn CAT. In a book named "Cat Talk," one would assume that a chapter entitled "Cat Talk" might deal with, oh, I don't know, TALKING TO CATS. How wrong I was! Cat lover Suzanne Smither, you have tricked me for the last time! "Sharing Your Life With a Cat" picks up where the previous chapter ended, although I don't really know where that would be. The book points out such helpful tips as "a cat is not a human," which is good to know when you're at the animal shelter and you continuously ask why the cats aren't wearing diapers and have paws instead of hands.

Suzanne reveals the names of her darling pets, Cleo, Hope, and Faith. Their names are "Cleo," "Hope," and "Faith," although not necessarily in that respective order. A few hundred paragraphs detail their extensive and exciting backgrounds in the "being a cat" industry, shortly before leading to the "myths and truths" section which dispels certain rumors that your kids might have heard about cats during recess in their filthy public schools. For example, the statement "keeping a cat indoors all the time is cruel and unusual" is a myth. According to the cat expert broad, reality is in fact the OPPOSITE; keeping cats outside is cruel and unusual! In fact, she goes so far as to say you should never, ever, ever, ever let your cat outside under any circumstances. If the cat is scratching at the door and meowing to be let out, just ignore him. If your home is on fire and your family is fleeing, let him burn. After all, he's not human, so you won't be charged for manslaughter!

Like any great book that is about talking to your cats yet never actually tackles the subject of talking to your cats, Suzanne Smither pulls another fast one by subsequently admitting, "if you can provide a yard free of harmful plants, with trees for climbing, surrounded by a 10-foot fence, your cat will have the best of both worlds." First off, the only places on the entire Earth that have 10-foot fences are either Federal penitentiaries or Area 51, and since most people live in neither of those, I kind of doubt the practicality of erecting a 10-foot fence. Maybe you could frame your cat for a brutal homicide and then turn your house into a fake prison. You could dress up as the warden and make him wear a pinstrip outfit and everything. One day your cat could plan a daring escape and end up stranded on top of your bookcase during an intense standoff. Be sure to sell the movie rights to The Mystery Channel, assuming they haven't gone bankrupt.