This Used to Be About the Cakes 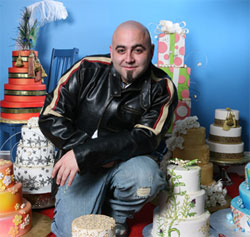 You fight the man long enough and one day you wake up and you're him. You're the man.You know, man, I am sick of this. Sick of the whole industry. The hype, the money, the fakeness. It's all Hollywood now. This shit used to be about the cakes. People used to give a damn about the cakes.

I remember when Duff told me he was going to make a cake so beautiful people wept. We were all of us young Turks, maybe not set to change the whole world, but we were gonna do something new in our corner of it. Our cakes were going to mean something, man.

Now look at Duff. Charm City sold out. They're in it for the money and the pussy. The big deals and gala openings. I saw them make a cake recently on TV (I don't own a TV, but my buddy does) that was nothing but fondant on a sawhorse. I think it was for Lehman Brothers. Where's the realness in that?

I mean, maybe nobody gives a shit about cakes anymore. Maybe the art is dead. But I still care. There's some of us out there who still care. We're the one getting shut out by these sellouts churning out mindless garbage for the masses. Charm City? The no-talent screamers on Fucking Cake Boss? 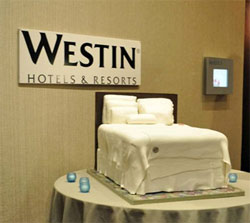 Get this, a hotel has a cake that is shaped like a hotel bed. We're really pushing boundaries now, Charm City.How about Hiho Nakamura. The cake guy who has never baked a cake. He's doing this series in Japan right now called 1,000 Birthdays where for free anyone can hire him and he will go buy a birthday cake and then come to your birthday and destroy it. Just utterly take it apart and destroy it in your child's face. You don't know how he'll do it. He might just sit and eat it or he might freeze it and smash it apart with a hammer.

There's your "Ace of Cakes" if you ask me.

Or how about Milo Astofavi, the Persian cookie-cake artist? Bet the media hasn't covered him. Bet Food Network doesn't give him a show where he shows you how to paint the Koran on chocolate-chip cookie-cakes using only three colors of frosting and a belief in the Prophet Mohammad.

Does Toth, the iconoclastic electric cake artist, need to move to Baltimore and start sculpting cardboard and fondant shoes for some rich people's 30th wedding anniversary? Do the ladies of the Sappho Cake Collective need to throw away their leather arm-bands and rum-raisin Karl Marx cake? Should they enslave themselves to Das Kapital or feel free to fashion the hair for cake heads from their swept pubes? 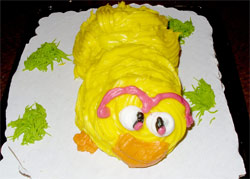 Raw and real.I was taught cake decorating by Jacquebe, the French cake minimalist recluse, inventor of the cake line, and what he always told me is that the most important thing you do when you make a cake is tell the truth. If you're worried about money or about pleasing some half-witted customer then you're in the wrong business. Sell cupcakes at the Krogers. We're about creating a moment and finding truth in that moment.

These days if you want that, well, good fucking luck, man. Even the indie cake artists are trying to go mainstream. They're crowding into the spotlight, competing like sheeple on those disgusting cake competition shows. No dignity or interest in advancing the art.

No, if you want that truth, that perfect moment, you need to go looking for outsider cakes. People who aren't looking to sell anything, not these TV-mercenaries carving a robot out of a block of foamcore and wrapping it in 15 pounds of fondant the color and texture of warm rubber. People without rules or clients. People doing everything the wrong way. 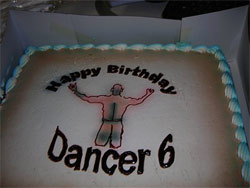 What it means to expose your soul in your cake.Estevez

The Sin Eater. Trying to re-popularize 13th century funerary absolution cakes. Creates lifelike cake busts of the deceased to be eaten after the service, thereby spreading the dead's sins among friends and family. This is supposed to free the deceased from punishment in the afterlife. Banned in the 14th century by the Pope, the ritual fell out of favor due to the Inquisition boiling practitioners inside giant copper kettles.

He survived the war in Bosnia to come to America and infuse his baking with the raw emotions and suffering of horror words like Tuzla, Paklenik, and Srebrenica. Ziro is the only genocide baker in the United States and one of only five worldwide. Jews, Armenians, Native Americans, Bosniaks, and now Palestinians receive free cakes. 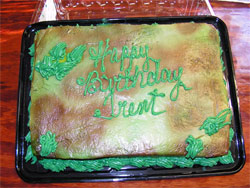 You're not supposed to know what this is. That's the intent of the artist.Baton Rouge Domme Hanna and her lifeslave pissboy Silver have introduced southern gentility to cakes themed on domination and sadism. Perfect outsider cakes for weddings, anniversaries, branding celebrations, cuck parties, and sissy pissy baby debutante cotillions. They only work for whites and/or lifestyle ponies, because they're doing this whether or not you pay them. They prefer riverboat events and will accept payment in lashes.

Cake video artist. His latest work is Live Cake Man. Don Don baked and decorated a traditional five-layer wedding cake, then placed it in an empty room with a live video camera feeding to a TV at a wedding. The bride and groom used headsets to direct a nude, hairless man's interactions with the cake.

Also known as the Masticator on the East Coast and the Reconstructionist throughout the LA cake underground. Bakes a cake. Chews a cake. Spits a cake out. Remakes the cake. The final product seems like a very moist and sweet cake. Similar to a honey-soaked sponge cake. He frosts every cake with a rich buttercream mixed with his natural body smut.

These and so many other great cake artists have been ignored by the media and the cake-swilling public. Me? I'm just going to keep on doing my fucking frog cakes, and if nobody likes them I don't care. I'm not gonna sell out my art or compromise. 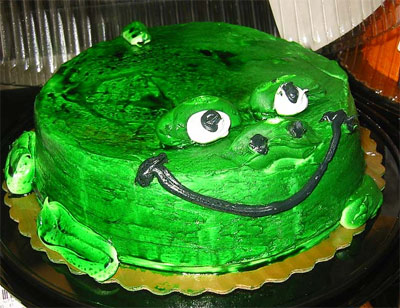 This is what I'm about. This is me. Frogs. I make them with my dick.

Cake images used throughout this article were taken from the funny cake blog Cake Wrecks.