As much as I truly enjoy frightening and alarming the general public (remember when I claimed every day, for three straight weeks, that drinking tap water had the same health effects as having sexual intercourse with a Tiajuana bus' tailpipe?), I have both frightening and alarming news that I feel you, the viewer, need to be aware of. If the American media has taught me anything, it's that the American public needs to be continuously informed that they could die at any moment. If it's Sweeps Week, they should also be told their kids could die too.

Scientists discover possible microbe from space - An international team of scientists has recovered microorganisms in the upper reaches of the atmosphere that could have originated from outer space, a participant in the study said Friday. The microorganisms are unlike any known on Earth, but the astrobiologists "want to keep the details under wraps until they are absolutely convinced that these are extraterrestrial," said study participant Chandra Wickramasinghe, a noted scientist at Cardiff University in Wales.

This is not only a historic discovery because it's the first microorganism discovered from space, but also for the fact that it's the only microorganism which Robert Downey Jr. hasn't been arrested for inhaling. As terribly exciting as this is, however, there are horrible scientific ramifications we all must consider, as a whole, to prepare us for such a discovery. I am of course referring to the fact that these alien microbes will either cause us to be killed by evil plants or turn us into bloodthirsty space zombies.

Please pull out your history books and turn to the chapter devoted to "The Day of the Triffids", which should be somewhere between the section about World War II and the chapter detailing whatever the hell the Teapot Dome Scandal was. One of the earliest and most terrifying incidents of evil alien microorganisms would have to be the time the Earth was attacked by the Triffids, a marauding army of killer plants bent on... well... killing. And being plants. Of course, many scientists don't believe the Triffids were legit "microorganisms", based off the fact that a Triffid was roughly the size of an outhouse (and most microorganisms are significantly smaller). Many microorganisms are in fact so small you've got to use a microscope to see them! I guess you could use a microscope to view an outhouse, but it's not really necessary. Plus, the results would likely scar you for life.

As far as I know, the Triffids were one of Earth's first battles with nefarious alien spores. In this movie based off real events which the director obviously saw during his LSD flashbacks, the citizens of Earth are all blinded by a wondrous meteor shower. I don't really remember how people were blinded by looking at falling rocks, but I can only assume the meteors were laced with magnesium or had their brights on or something. Anyway, everybody goes blind, which naturally leaves Earth an easy victim for the nefarious Triffids, a race of giant deadly plants. Well, in theory. In reality, the Triffids were a race of clumsy, awkward, moronic plants that made duck noises and were somehow able to psychically convince Americans visiting England to run into them and be killed. Eventually all of humanity solves the Triffids problem by collectively joining together, overlooking their differences, and being as completely boring as possible This caused me to fall asleep and miss the last 94 minutes of the film, which made their solution incredibly effective, but unfortunately also results in my inability to help anybody out if / when man-eating plants start falling from the sky. 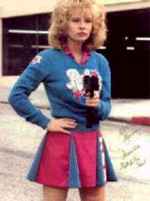 Another fine example of cinematic science can be found in Thom Eberhardt's 1984 thriller, "Night of the Comet", a film which asks many "what if" questions, such as "what if Thom Eberhardt was to direct a movie?" and "what if the year was 1984 and a movie about a comet was to be released?" When a comet (which was undoubtedly just crammed full of outer space microorganisms) passes by the Earth, many people appear surprised when they realize they have either turned into bloodthirsty zombies bent on killing all remaining humans, or piles of red dust. Well, I can only assume the people who suffered "spontaneous dust pile-azation" were surprised, because it was difficult to tell by just looking at a pile of red particles, especially when they exhibited the same acting talent as the rest of the movie's cast.

In both of these high quality, scientifically-endorsed films, conclusive proof is presented that microorganisms = "bad." Have you ever seen a movie about alien spores that save failing marriages, cure the sick, or help native Floridians figure out how to vote? Nope, because almost anything that comes from space, especially anything that can't be seen by the naked eye, is inherently evil and bent on the destruction of the human race! I see no proof that would lead me to believe these microorganisms would be any different, and can only conclude we must do the only logical thing left: PANIC AND RIOT UNTIL THE AMERICAN NEWS MEDIA TELLS US WE CAN STOP!

Even though I'm still at my parents' house, I am still lucky enough to receive messages from everybody's favorite retired war hero, Cliff Yablonski. Boy, am I ever fortunate!

hey jackass. 3 new pages of people I hate over on my site. I wouldve made more, but Im too busy to screw around with the stupid internet crap and IM not a computer geek like all you freakshows because I have better things to do and I dont have a computer cord that goes all the way out to my back porch. shut up. and no, I havent been drinking all night despite whatever the idiot neighbors and their retarded kid tells you. And the police dont know jack shit either, I hit one of them in the face with a bookend because I thought they were just some punk kids dressed up as cops so they could bust into my house and get into my liquor cabinent. punk kids. every one of you.

Oh, that Cliff Yablonski! Please check out the three new pages of people he hates, or I'm afraid he's going to try and hunt me down with his weedwacker again.