On the first day of December this year, throngs of revelers poured out into streets across the world to celebrate the 17th annual World AIDS Day with high risk sexual activity and intravenous drug use. Although nowhere near as old as the other holidays with which it shares a season, the history of World AIDS Day is nevertheless an interesting one. It began in May of 1987 with a struggling San Francisco head shop owner, known to history only as "Sharpie Joe", so named for his prodigious use of nitrous, Sharpie markers, and other inhalants. According a close friend, "Joe seemed to like breathing anything that wasn't air."

Demand for his handblown glass bongs and other smoking accessories had fallen off sharply due to the popularity of cocaine, and to keep his head above water, Joe began selling bumper stickers bearing the slogan "Visualize Whirled AIDS," hoping to become the first on the block to begin merchandising related to the up-and-coming epidemic. The gamble paid off. Within a few short months, the bumper stickers became a worldwide phenomenon, and American Greetings, Inc. approached Sharpie Joe with an offer to buy the slogan from him for over $3 million. On the verge of bankruptcy, Joe eagerly accepted, and within a week was stabbed to death in an unrelated mugging.

With their new acquisition, American Greetings immediately began an astroturfing campaign by mailing dozens of anonymous letters to newspapers around the country, decrying the lack of a holiday to commemorate the heterosexual community's collective dodging of the bullet known as HIV. The idea rapidly gained momentum, and on December 1st of 1988, the very first World AIDS Day was celebrated.

The date December 1st was not chosen at random. In fact, it was settled upon for several reasons, listed below:

It fell conveniently close "Smallpox Sunday", a similar holiday which was observed on the 1st Sunday of December, but had been more or less abandoned following disease's eradication in 1979. As a side note, one tradition that endured the death of this holiday was an ice cream dish known as the "Smallpox Sunday", which was conceived of as a sugary recreation of a smallpox patient. It consisted of vanilla ice cream and cherry or strawberry syrup, to symbolize the ruddy skin associated with the disease. Chocolate chips were then liberally sprinkled over the top, an homage to the blackened skin seen in victims of hemorrhagic smallpox. After that, a dollop of whipped cream representing a smallpox pustule was slapped on top, followed by a cherry, which was purely decorative and didn't represent any symptom of the disease. The dish was later shortened simply to "Sunday", which was then corrupted to "Sundae."

To remind the first world that it only had 25 days left to get that Christmas shopping done.

To avoid putting a damper on the frivolous flings of Spring and Summer with unwanted and depressing messages about responsible sexual practices.

There was already a holiday on February 14th.

Getting the public to recognize World AIDS Day was only half the battle though. Keeping them interested was a task in itself. To accomplish this, World AIDS Day planners looked to holidays that had already been established, and conducted research to determine which ones the public enjoyed (Christmas, Halloween) and which were only grudgingly observed out of guilt or bribery with days off from work (Veteran's Day). They discovered that behind every successful holiday was a "gimmick" to keep people hooked. For example:

Taking a lesson from those who came before them, they arrived upon a rather unique "hook" for their fledgling holiday. Each year an official theme would be adopted to keep things fresh and festive, and guide people in planning their World AIDS Day parties. Early themes included "Going retro!", "Say it Reagan!", and "Killer Queen."

The 90s saw a series of themes that were only tenuously, if at all, connected to AIDS, including "Haunted Hospitals" and "The Playboy Mansion." This, combined with plummeting infection rates, was responsible for the decline in the popularity of World AIDS Day during that period. The public's appetite for festivity was further dampened by the migration of the virus into the heterosexual population, and the sobering realization that AIDS wasn't just a "gay problem", except in the colloquial sense.

The 80s saw the death of several of American Greetings' flagship products (Care Bears, Rainbow Bright, etc.) and the aggressive marketing of World AIDS Day was the only thing keeping American Greetings from being swallowed whole by rival schmaltz-mongers Hallmark. For awhile it seemed their days were numbered. Thankfully, that was one disease they knew how to cure. In 2000, they brought in a brand new marketing firm and hired Foo Fighter's frontman Dave Grohl to drum up public interest in the "so-called disease" again. 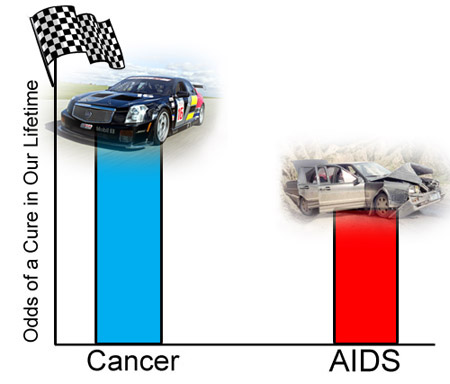 This year saw a record increase in participation, with parades and festivals springing up all over the globe. Perhaps one of the most exciting things about the holiday is that it's brand new, relatively speaking, which means that you can play a hand in shaping traditions which will carry on for decades and hopefully even centuries to come. So whether you decide to celebrate it with a gala fundraiser, a few close friends, or just layin' around sick all day, make the most of it, and have a happy World AIDS Day.

Want to read about something?