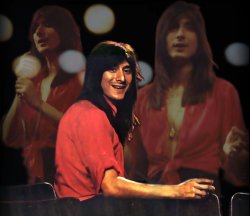 One starstruck lad stood in front of the stage, waiting patiently for a second encore. Some say the boy waited there for an entire year until Journey visited again in '86, and during the first song he died of a heart attack on the same exact spot.

The groupies tore at the tassels on Steve Perry's colorful vest, and pleaded with him to take them away and make sweet love for them in his hidden cloud fortress. Steve Perry cared not for the temptations for the mortal flesh. It's not like he was gay or anything, but his divine essence was simply beyond such primal human instincts. The rest of the band swooped in on the crestfallen girls, who, although disappointed that Steve Perry had ignored them, were willing to accept their lot of giving hand jobs to the bass player.

Steve looked at his fellow bandmates with a mixture of pity and longing. He saw them as stupid, smelly animals, eating mouthfuls of greasy ham while groping underage girls and guzzling down handfuls of barbiturates with a case of beer. But he also wished he wasn't the chosen one, and the savior of mankind. He longed to be a normal person who could forget himself and wallow in ignorance like the rest of the swine.

But this was not his path. Steve Perry's coming to this planet was preordained by the prophets of old. His majestic voice had the power to cure cancer in little children, or to cause a class 5 hurricane to hit a major metropolitan area. It is this rebirth and destruction that keeps the balance and saves the universe from tottering over the brink of destruction.

Steve Perry transformed into a pelican and started the long flight back to his home in New Jersey. Just then, his emergency beeper -- used only in the most dire of circumstances -- went off. The call was from the President of the World.

Steve Perry transformed back into his "human form" and fell to the earth with a loud crash that woke up the whole state of Nebraska. He then found a pay phone and called the President of the World to see what was wrong. 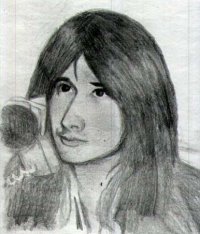 "Thank God you called, Steve Perry," cried the flustered President. "We are in big trouble."

"What seems to be the problem?" Steve Perry calmly asked.

"The fishermen in Alaska, they are having no luck! Their nets are devoid of bounty; no fish are to be had. This will destroy the world economy and lead to turmoil in every city."

"I'll see what I can do," responded Steve Perry, as he turned into a nimbostratus cloud and gently floated north towards Alaska without waiting for the President's response.

When he arrived above the sleepy Alaskan fishing port, he could see that trouble was afoot. There was no bustling of boats or unloading of fish. A single sailor glumly played solitaire on the dock while smoking a pipe. Steve Perry approached the solitary man to question him.

The old sailor was naturally distrustful of strangers, especially ones with long hair and the ability to transform into clouds. He tried to flee, but Steve Perry's fingers grew 10 feet long and he captured the man in his oversized hands. A rigorous interrogation followed, revealing little other than what Steve Perry already knew. The fish were simply vanishing, and money along with them. Something bad was going on in the ocean, but nobody was sure what.

After leaning all the sailor had to tell him, Steve Perry crushed him in his large fist and tossed the broken corpse into the waves. He had no time for a proper burial.

Steve Perry dove headfirst into the freezing sea, turning into stone to hurry his descent to the bottom. To solve this mystery, he knew he had to go deep where all the evil things dwelled. The last time he had to make a journey into the ocean, he had battled a giant squid and lost an arm in the ordeal. Of course, the arm grew back in due time, but he was forced to wear a fake arm on stage, leading to many embarrassing accidents during live shows. It was not an experience he wanted to relive.

In the gloomy darkness, Steve Perry spied a dull glow behind one of the rocky bluffs of the seabed. After swimming over the rise, he came across a vast underwater kingdom full of brisk activity. Mermen and mermaids toiled in seaweed fields, and manta-rays pulled wagons filled with clams into the castle for inspection and sorting. Sea horses frolicked in the algae grove, having just gotten out from underwater Bible school.

Steve Perry, using his flawless deductive logic, came to the conclusion that these underwater folk were the root cause of the disturbance. They were the only intelligent life forms down here, and must be up to some sort of skullduggery. He turned into a class-C attack submarine and dove into the hive of marine activity, firing his torpedoes as he went. 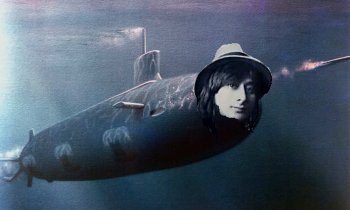 The explosive warheads detonated, causing a whole group of seaweed farmers to vaporize on the spot. Nearby seahorses exploded into chunks of fleshy membrane. The citizens of the mermaid village gathered up their children and fled the carnage as the towers of the friendly underwater kingdom collapsed around them. Steve Perry launched a torpedo into a nursery, blowing it to Davy Jones' Locker. The entire village below was razed in a cataclysm of destruction, a doomsday that the mer-elders predicted long in advance on account of the rampant underage egg spawning that was taking place among all the mer-teenagers. None were spared.

"Mission Accomplished" read the banner hung across the Alaskan fishing dock as Steve Perry returned victorious. The fishermen cheered and gave him offerings of squid and whiskey. The evil in the sea had been vanquished, and now all would be well in the fishing industry. The men hopped on their boats and made for the fishing grounds, eager to make up for lost time. Steve Perry waited patently on the dock, where he planned to play a special performance of "Don't Stop Believing" upon their return.

Eventually the boats did return, but the fishermen were in no mood for fun and frivolity. Their nets had remained empty, with no fish were in sight. The mystery of the sea had not been solved after all. The angry mob of fishermen grabbed harpoons and oars, ready to do battle with the handsome rock star who had given them false hopes. Steve Perry was not one to be defeated by such a common lot of humans, however, and he used his laser eye power to shoot the wooden dock, causing it to burst into flames and scatter the unruly mob. He then dove back into the ocean to see if he could right this wrong.

Steve Perry returned to the ruins of the underwater kingdom, scouring the remains for any sign of life. There he spotted a badly burnt starfish, trying to crawl into some coral and die in peace. Under interrogation, the starfish told Steve Perry all he knew of the missing fish.

Apparently, the underwater kingdom was one of peace and prosperity, but had befallen the same ill luck as the surface fishermen. They knew that a great evil lurked in the shark caves beyond the reef, and it was thought by the elders that whatever was hiding there was causing the fish disturbances. They had sent out three crab scouts in the last week, but none had returned. With this last sentence, the starfish died in Steve Perry's hands. He wept over the poor soul, and swam towards the shark caves, determined to avenge his death and finally crack the case.

True to their name, the shark caves were full of man-eating sharks. The sharks, however, sensed something strange about Steve Perry and kept a safe distance. The sea caverns went on for many miles, gently sloping upward and finally ascending into an open air cave somewhere on the Alaskan coastline. There he saw a terrible sight.

There were various water pits around the cave full of thrashing fish, the same ones missing from the Alaska ocean. Their combined strength was spinning gears set atop each pit, which was connected to a system of pulleys controlling a large printing press in the middle of the cave. With each revolution of the gears, a new t-shirt was printed and dropped into a shipping box under the press. Steve Perry walked up to the box and took out one of the shirts. It was as he feared. The shirt bore the likeness of Ronnie James Dio, the Satanic rock star of darkness. 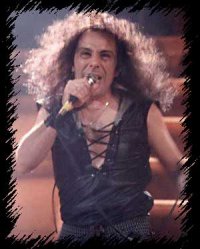 "Look out!" screamed Ronnie James Dio as he jumped out from a hidden recess in the wall and threw a trident at Steve Perry. Steve deftly dodged the incoming weapon and shot a power beam from his fist. The impact caused Dio to crash into the press, destroying the complicated pulley system that took him so long to rig up with the help of his brother-in-law. Dio became furious and shot a fireball at Steve Perry, who was caught off guard and didn't have time to put his force field up. His clothes caught ablaze, forcing him to jump into one of the holding ponds. Dio took this opportunity to finish him off, turning into a red dragon and tearing at Steve Perry with his razor sharp claws.

As he felt the darkness take him to the land of noble spirits, Steve Perry remembered what his Native American grandfather used to tell him as a child. He would say, "Steve Perry, if you ever feel yourself overwhelmed by the dark, remember that some things can never be put out. When you are lost in the dark, make a rainbow and ride it into the light. Find the rainbow in the dark."

He recalled these wise words as Dio closed in for the finishing blow. Steve Perry turned into a pure rainbow, illuminating the dark cave in a wash of radiance. He arced into the Dio dragon, piercing his scaly hide and going right into his black heart. Ronnie James Dio let out an earthshaking howl, shrinking back into his human form. He scowled, grabbed his box of concert t-shirts, and vanished back into the ninth plane of Hell.

Steve Perry set all the fish in the holding pen free. They were eternally thankful for his help, and the king of fish gave Steve Perry the keys to the underwater kingdom -- which, unbeknownst to him, had been destroyed the day before. Steve Perry then returned to the surface to let all of the fishermen know that their plight was at an end. Most had drowned after the dock burnt, or had their ships been set ablaze in the resulting fires, but the survivors were thankful and cowered before the powerful presence of Steve Perry.

Later on, The President of the World presented the Medal of Honor to Steve Perry and gave him a big manly hug. All was well in the world again.

Before long, the band was back on the stage. The crowd surged with excitement, crushing the people in the front row. Women flashed their breasts at the band as they belted out "A Wheel in the Sky" with righteous vigor. To the band, it seemed like the whole world was in their hands, but only Steve Perry knew that the whole world was really in his hands alone.

Two years later Steve Perry would leave Journey to follow his dream as a puppeteer, and save the earth from an invasion force sent from Jupiter's moons. But that, my friends, is another story...