The Beginner's Guide To Building A New Computer

Tired of your friends and family making fun of your circa-1990 Compaq Presario? The solution is obvious! Don't have access to a handgun? The other solution is pretty obvious too! Toss your old system in the trash or your neighbor's backyard and step into the future by building a powerful new computer by yourself with the help of this easy to follow guide. You'll be able to play the latest games, make your loved ones reconsider how useless you are, and temporarily forget that all of us are going to die some day.

I'll walk you through the entire process, from selecting the right parts to putting it all together. Before you know it, you'll be driving down the information superhighway in a rowboat instead of the hang glider you've been using. Let's take a look at the components you'll need:

The type of processor you choose affects nearly every component you'll be using from here on out, so the first thing you should do is determine which chipset is best for you. There are two major brands out there, AMD and Intel. AMD processors are faster when it comes to gaming and video editing, while Intel is better at audio/video encoding and having a blue and orange logo. This guide is assuming you'll want to play games because every other article I write relies on stupid video game references and the possibility of my clever Bionic Commando jokes going unappreciated frightens me, so we'll pick an AMD processor.

The best deal right now is the Athlon 64, with the 64 indicating it's a 64-bit processor as opposed to the 32-bit standard used in the previous generation. As you'd expect, 64-bit is 2.5 times as powerful as 32-bit, so you're really going to be like "wow" every time you run a program. Some might consider such involuntary outbursts as a drawback, but chances are you're lonely and will welcome the sound of any voice at all.

You'll want to buy the absolute fastest AMD processor on the market, because the 10% difference in speed between a $200 chip and a $1000 one is totally worth it when you consider several factors that I can't think of at the moment.

Motherboards are what every component of your computer plugs into, and they got their curious name from the lactating nipples that were a standard in all computers of the 1980s, a feature that has been rendered obsolete by the introduction of Solitaire.

The processor you chose will determine what socket type your motherboard must have, as the AMD 64 uses Socket 939. You could buy a motherboard with a different socket type and make it work by sort of cramming the processor into the incompatible slot, but that is only recommended for experienced system builders. I recommend nVidia's nForce 4 motherboards, which basically combine a nice feature set with solid onboard audio and networking capabilities built right into the board. As of the time of this writing there are no nForce motherboards designed to follow Asimov's Three Rules of Robotics, so be cautious and wear some sort of protective clothing at all times.

Despite their misleading name, graphics cards actually enhance the speed and quality at which graphics are displayed. The standard format nowadays is PCI-Express, which got its name from the speed at which compatible cards can render Sonic the Hedgehog running through a loop de loop. All PCI-E graphics cards are built upon a heavily modified version of Sega's blast processing chip, which means they are also able to render blood instead of sweat like competing formats.

Your main choices in PCI-E cards come down to products from two companies: ATI and nVidia. ATI has three capital letters in its name while nVidia only has one, but the placement of nVidia's capital letter is very impressive so I give the nod to them. The best way to determine which specific graphics card you want is to check out the box art for all the nVidia PCI-E cards at your local Best Buy. The box featuring the meanest looking goblin or the hottest fairy/mermaid always contains the best card. 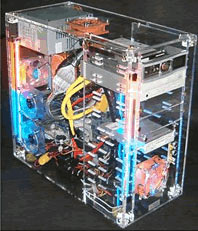 When choosing a case this is a good example of what to shoot for, but if you can find something more gaudy then go for it.

Your computer's memory is important, as a system with less memory tends to forget what time it is and what Star Trek wallpaper you picked for your desktop. Memory comes in all sorts of speeds and formats, so the general rule of thumb is to say fuck it and pick one at random.

Your computer case should be roughly twice as tall as your motherboard and feature a gigantic window in the side. This is where you'll randomly stuff neon colored tubing and fluorescent lights, which will improve the performance of your machine by roughly 300%.

A power supply is pretty much just like Air Supply, only it provides electricity to your computer and produces a much more pleasant sound. Any power supply will be good enough provided it outputs at least 15 Jigowatts and is rated for use underwater.

Once you have all the parts and are ready to assemble them, you should proceed by opening each component's box with an opening motion. Attempting to open boxes with a closing motion could permanently damage their integrity, which would not be covered under any warrantee.

Before you begin lustfully grabbing at the equipment itself with your greasy fingers, keep in mind that you are dealing with electronics that could possibly discharge dangerous amounts of electricity. It's always a good idea to make sure you're grounded before you begin, and the best way to do that is to stay out late the night before you build your computer and don't call your mom to tell her where you are. If you're reading this site and have somehow moved away from your parents' house, you're already a bigger risk taker than most of us and a little electricity probably doesn't scare you.

Now lay your motherboard on a flat surface and determine whether or not it's a color you can live with. Many motherboards are a dull green or brown with random bits painted garish shades of purple and neon green, which can just totally ruin the mood when you have a hot date over that's otherwise turned on by your computer specs. Go ahead and slap a coat of enamel paint on the entire motherboard, using whichever color your religion permits and making sure to cover every nook and cranny.

Once the paint dries, you're ready to install the cpu, graphics card, and RAM. This process is very complicated and the slightest of mistakes will turn your investment into a heap of useless circuitry, so here's exactly what you do: DON'T FUCK UP.

Once you're done with that, screw the motherboard into your case, hook up your hard drive and power supply, and you're all done! If your computer doesn't boot up or just beeps, go back and repeat the DON'T FUCK UP step, but be absolutely sure not to fuck up. Most people who have problems fucked up, which is why it's important not to.

If your computer boots, seriously consider purchasing a monitor and a cd/dvd drive so you can install an operating system and see what's going on. It might cost you a few hundred dollars extra but in the long run it's money well spent, especially if you plan on using Photoshop extensively.