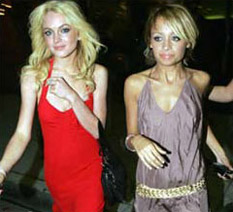 It was Danzig who first pondered aloud how the gods might kill, but it is I who ponder in text form what celebrities eat. Like Danzig's gods they tower above us, kissed by the seraphim and teased with diadems. They sparkle and shine. They look down upon us from their heights and wonder to one another how they came from such a wretched mass of flesh. They are transcendent. Yes, even Clint Howard. But even diaphanous Tom Cruise and his body made of pure light must occasionally be nourished by more than E-meters. In short, they must eat, and with the help of Google and my extensive contacts in the entertainment industry, I have determined what celebrities eat.

Before you judge them, I ask that you keep in mind at all times that they do not necessarily choose to have the palates they do. For them, a discerning taste in food comes with the richness of their new existence.

Bruce Willis' offer of a million dollars for the capture of various terrorists was interpreted as a gesture of support for America's war on terror. The truth is that Willis is capable of deriving only the barest of sustenance from the food most of us enjoy and must eat terrorists for real nutrition. You will notice that Willis is at his best when he has recently fed on a terrorist. For example, in "Tears of the Sun" and "Die Hard 2" he was nearly hibernating and barely scraping by on a diet of steaks and potatoes. However, when filming "Die Hard" he had just eaten a Palestinian suicide bomber and when filming "Sin City" he had eaten a Chinese Christian sect leader that China had classified as a terrorist. Although Willis agreed with the Chinese man's ideology, he is able to feed on anyone that a nation-state declares a terrorist.

Teen sensation Lindsay Lohan derives all of her nutrients from the sun and her health can be judged by the number of freckles on her skin and the size of her energy-storing chest humps. While she was very healthy as recently as a year ago, rising levels of green house gasses have blocked the amount of UV radiation she is able to receive. Her humps have been almost entirely reabsorbed into her body and her skin has gone from a healthy dappled pattern to a leathery tan. Luckily, Lohan has plans to travel on Richard Branson's first commercial space flight. Without the intervening atmosphere, experts expect Lohan to return from the voyage looking like a moiré patterned frog tethered to two zeppelins.

Speaking of Richard Branson, though he is only a celebrity because of his immense fortune, he has also developed the unique dietary requirement of pure adventure. In his childhood Branson could be satisfied by sports, board games and the occasional youthful indiscretion. Since then his tastes have matured to the point that only the most intense and raw adventure can provide him with sustenance. Last July he used a trident to kill an Eskimo while trapped inside a room with an atomic bomb that was timed to explode. In October he paid a genetics lab in Korea to cross a dolphin with a lobster and then Branson rode it across the Atlantic. For January he is planning to swim across a river of molten nickel and then attempt to make love to a hydroelectric turbine.

Even less than wealthy celebrities have eccentric tastes. Guitarist, QVC regular and all around swarthy character Esteban has a diet that consists entirely of bottled tanning lotion. He used to be able to just apply the tanning cream to his skin, but he has become so mysterious and tan that he must now inject it directly into his veins. When former child star Danny Bonaduce tries to eat normal food it will pass through his body completely undigested. He can drink water and remain hydrated, but for actual nutrition he has to punch vitamins out of spouses. After a long process of trial and error Bonaduce has discovered that his wife's face is an excellent source of battered calcium and a haymaker to her sternum will provide him with a week's worth of niacin. 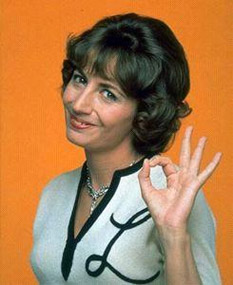 Some celebrity eating habits might be considered disgusting by most people's standards. Tom Hanks, for example, enjoys eating newborn calves served live directly from a cow's uterus and still clad in the bloody embryonic sack. He has been photographed by paparazzi more than once with his jaws distended around the lower half of a swollen cow, waiting for the birthing to begin. His wife, Rita Wilson, enjoys eating children's cancer at hospital oncology wards using a long serrated tongue that ends in a sucking proboscis not unlike a fly. Wilson's feeding is agonizing to children, particularly those with bone cancer, and she cruelly always leaves just enough cancer behind so that it will grow back and provide her with another meal.

Celebrities can also develop interesting feeding habits as a group. On "Laverne and Shirley," stars Penny Marshall and Cindy Williams spent so much time together that both their menstrual cycles and their eating habits synchronized perfectly. While one was menstruating the other would be digging through the bins in the bathroom searching for soiled hygiene pads. They even developed a previously unseen organ in their necks that scientists have since called a "polyglottis." It stripped organic nutrients, like coagulated menstrual blood, from a polymer pad and then allowed them to excrete a ribbed cylinder of plastic from their rectum. Some of these are still available on ebay. Just browse the celebrity excreta category. They should be right next to the cones of carbon Edward James Olmos would periodically push out of his face on the set of "Stand and Deliver."

Another interesting case of celebrities synchronizing their eating habits involves the cast of hit TV show "Friends." During the shooting of the series the stars of the show developed an elaborate internal ecosystem. Courteney Cox and David Schwimmer would graze on various raw vegetables and develop large tumors on their haunches that dropped off periodically. These tumors would be collected by Lisa Kudrow, who would eat them and use the energy they provided her to reproduce herself through asexual budding. Kudrow homunculi would fall from her chest and back and grow to maturity in a matter of hours. Jennifer Aniston and Matthew Perry would then hunt down the Kudrows and consume them for nutrients.

The hideous death screams of the Kudrows could be heard all night long on the set and when the morning came the crew would have to hose the blood off of everything. Because the Kudrow spawn were indistinguishable from the original it is likely that Lisa Kudrow was killed and eaten quite early in the taping of the series.

Rubber-skinned Matt LeBlanc existed as an omnivorous scavenger on the set. At night and even in between takes LeBlanc could be seen wriggling across the floor on his belly sucking up any excrement or dead skin cells the other cast members might have dropped. He would frequently disappear, only to be found curled inside the skeleton of a Kudrow, sucking the sheath of muscle from its ribcage. The end of "Friends" heralded the end of this carefully-evolved ecosystem. Since then, the cast members have starved and withered, most clinging to life and celebrity by their bloody fingertips. 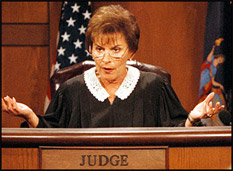 Possibly the most horrifying celebrity feeding habit of all belonged to TV arbitrator Judge Judy. For unknown reasons, the sassy judge had a chest cavity packed tight with a whipping mass of carnivorous symbiotes. Judge Judy would use secreted pheromones to lure unsuspecting men and women back to her mountaintop eyrie. There she would mate with them and administer a paralytic agent through a sting concealed in her vagina-like cloacae. Thus anaesthetized, she would roll her prey onto their back and eviscerate herself, ejecting the mass of symbiotes in the process.

The sticky creatures would entangle the prey and begin a slow and agonizing digestive process. Once the nutrients were fully absorbed into the symbiotes, Judge Judy would then allow them to slither into her through her cloacae. The symbiotes would then expel the prey as a nutrient-rich soup in Judge Judy's chest cavity, from which both she and the symbiote could derive sustenance. Luckily, Judge Judy was killed by a crypto-hunter in 2003 and can be found plasticized and on display at the Smithsonian Institute in Washington, D.C.

There you have it, a slice of the celebrity gossip pie that you won't find being served up by Michael Musto anytime soon. If, like Danzig, you want the answer and the truth, I suggest putting away the belt and book marking Something Awful. We will provide you with a daily serving of truth so big you'll choke on it. Erotically.