The Difficulty of Pleasing Santa

The concept of a mythical judge has been incorporated into virtually every metaphysical system of beliefs. The jackal headed Anubis would weigh the hearts of dead Egyptians, in Hinduism it is believed that Lord Yama records and judges the earthly deeds of men and of course the all-knowing God of Christianity will judge you based on your sins and your contrition. For those who celebrate Christmas there is Santa Claus, the omniscient watcher who is aware of all your actions and places you on a list of either naughty or nice depending on your behavior throughout the year. Those who do good will receive a bounty of gifts and those who run afoul of Santa will suffer through another holiday with only lumps of coal to warm their heart.

The problem with Santa is that, unlike the other mystical judges, Santa does not have an apparent moral code that can be followed to make his so-called naughty or nice lists. Face it; we simply do not know much about Santa's value system. What you may consider to be a good or nice action may actually conflict with Santa's moral code and land you on the naughty list. Maybe Santa is a Zoroastrian, a skoptsi or an existentialist. Maybe Santa's idea of nice is burning an inverted crucifix into your chest with nitric acid and his definition of naughty includes helping an old woman cross the street. These scenarios are unlikely, but to help you prepare for the possibility of Santa's adjudication I have constructed five hypothetical Santas. 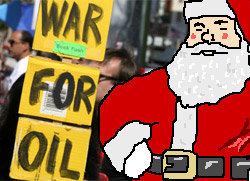 Moveon.org Santa is crazy liberal and he is plugged into the blogosphere grassroots Internet movement. He gets 95% of his information about the world from forums and IRC rooms devoted to liberal conspiracy theories. His sleigh is covered with peak oil bumper stickers and he probably has a Che Guevara shirt stuffed into his closet. He was really into communism in college, but it just hasn't been given a chance. Moveon.org Santa wants you to know that the healthcare is better in Cuba than in the United States, just ignore the ultra-conservative free speech stance of Castro. 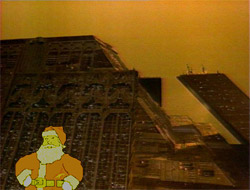 Libertarian Santa believes that taxation is one of the greatest evils perpetrated in the world. Taxes should exist only for the purposes of national defense and to finance a very limited judicial arbitration system. The Federal government should be all but powerless and all rights should be fundamentally based on property rights. In Libertarian Santa's world all morality is essentially replaced with a value system that favors wealth and possessions over any sort of governmentally-enforced individual liberty. Laws should be set by an individual community. If you do not like the "no blacks" rule in your current community then you are free to go find another community, hopefully one consisting entirely of blacks. Libertarian Santa describes himself as socially liberal, but you'll never actually hear him championing a socially liberal cause. 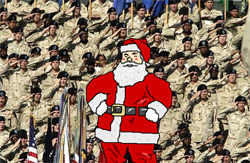 Neoconservative Santa used to be a democrat, but following the September 11th attacks he has become extremely hawkish and has abandoned seemingly all of his former democratic ideology. Neoconservative Santa likes the Bush administration, but he is in it more for Dick Cheney than George W. Bush. He embraces the rhetoric of fundamentalist Christianity and feigns interest in its politics to garner the support of ultra-conservative Christians. He has friends throughout the upper-echelons of the corporate world and he is not afraid to bend a few rules or twist a few arms to help them out. 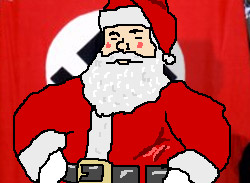 Racist Santa is a member of the master race and he wants you to know it. If you're Jewish, black, Mexican or pretty much any other non-white race then you are virtually guaranteed a place on his naughty list. Even you white people had better watch out because Racist Santa is constantly on the lookout for race traitors. 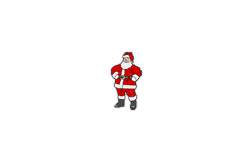 Solipsist Santa is not sure that you exist or that he exists as anything more than a lens through which the light of consensus-reality passes. He carefully records each and every thing you do but he can't place a whole lot of weight in your actions because he cannot rule out the possibility that he is imagining you and all of the things you have ever done.