Who Wants Some Damn Ice Cream?! 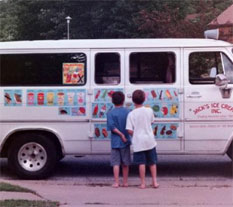 I hope you kids enjoy your ice cream...enjoy it so much you DIE!I've been in Chicago visiting my super duper AOL girlfriend for one week now and already I have discovered my enemy here in the city. Usually it takes me a little longer, it took me three years of living in Ohio to realize that Old Man Harris was my enemy. That blasted Harris and his bucketful of softballs were an unholy reign of terror out on Poplar Street, pitching those damn things at buses like they wanted to play catch. I put a stop to him - the hard way if you know what I mean - but I'm just getting started here and already I'm digressing all over God's Sweet Creation.

Ice cream trucks. My first couple visits here I didn't know about them because it was the middle of Winter at the time and when I lived here before I lived on the 14th floor so I wasn't exposed to much in the way of their merry chirping. Now it's warm here in Chicago, close to eighty today, and the ice cream trucks along with their choco-smeared throngs of petulant urchins are out in serious force. At first it was the usual, a slow merry-go-round type of tune that brought the ice cream addicts running from their alleyways and sewer hideouts, their mouths dripping with a hunger for various frozen confections. I hadn't been around ice cream trucks in a long time and I had forgotten the way they stopped whenever enough slavering children gathered round to make the wasteful idling of the engine economical. I had also forgotten the painful volume at which they blared their saccharine tunes out, shrill and annoying and slightly hypnotic, sometimes reaching into a range of pitch that would make dogs come running for ice cream.

This reminded me of my childhood in Ohio. I lived out in the country so there was nary an ice cream truck in sight. However, someone who operated one of those frozen treat hell beasts lived out past my house and every day around 9 o'clock during the summer, if I happened to be outside, I would get to experience them driving past. This really wasn't much of an event unless the driver had forgotten to disengage his music device. You see, this was an ancient, rusted out, hunk of shit ice cream truck and the speed of the music was directly proportional to the speed of the vehicle. The road outside my parent's house was regularly traveled at 60 miles an hour or faster, which when done in an ice cream truck where the music is tied to the speed, creates some sort of shrieking inverse whale song that you can feel in your bones from a mile away.

One ice cream truck innovation I certainly had not experienced in Ohio is what I like to call "The Remix Ice Cream Truck". Much as you would expect from its moniker, the truck plays some sort of bizarre mixture of classic ice cream truck music, ethnic barrio music and hip-hop remix, all fused into a horrid rendition of "She'll Be Comin' Round the Mountain" with a clap track and a synth beat. Every time a song ends there is a brief pause and then a voice shouts "HELLLLOOO" in what sounds like the voice of that gay bald guy from that Interior Design show trying to impersonate Carrol Channing. Apparently this particular ice cream truck enjoys getting flat tires constantly right outside Michelle's apartment, meaning that I am frequently driven out for no other reason than to escape the hideous urban cacophony of the Remix Ice Cream truck.

Yesterday it drove me out, sent me flying, exorcised me from the apartment like a bad case of the frighteners getting hit with an electric water gun full of holy water. One thing Chicago has plenty of is Army Surplus Stores, and what better way to combat rogue ice cream trucks and deal with a little domestic dispute than to arm myself to the teeth with gray-market castoff's from the Reagan era? You see that's the kicker, I can't think of a better way! Those ice cream trucks would be at my mercy and that bitch would have hot meals waiting for me when I get home from shopping at other Army Surplus Stores once I was packing some heat. Which is why my destination became the Army Surplus store. 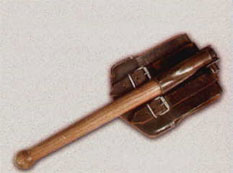 This tool will dig its way to the bottom of relationship problems or ice cream truck woes!If you've never been to one of these places before they usually have American flags draped on wires across aisles of surplus canteens, entrenching tools and helmets. Up by the register there is always a glass case full of shurikens or knives and somewhere in the store, usually also up at the front, there is bound to be a 500 pound bomb that's been defused and painted garishly. If you've ever wondered where people get t-shirts with skulls on them, wonder no more, it was probably at an Army Surplus store.

The used service automatics had my eye, but the entrenching tool had my wallet, and while guns may work as all purpose tools in Westerns they really aren't all that great for digging a hole to conceal the decaying corpse of a nurse. An entrenching tool on the other hand, makes digging a snap, will mete out justice to evil ice cream trucks and will serve as an adequate stand in for the back of my hand when discussing current events with Michelle. Haha, folks, a little joke, I would never beat her unless she made me, and oh lord has she come close in the past.

That blasted ice cream truck and that friggin' sass mouth woman of mine both have some dug-in ambushes set up for them if they make a wrong move.

It's that time of the week again! Photoshop Phriday is here to rock the shoes, socks, and flesh off your feet. Those scandalous Something Awful Goons have created an insane amount of Muppet Movie Photoshop images. There are literally more Muppet images in this Photoshop Phriday than in the Library of Congress and National Archives combined and multiplied by the square root of a million. Here's a sneak peak:

Get your hot booty over to this week's Photoshop Phriday right now!