Art Critiquing the Life Out of Your Kids

Art has long been regarded as the universal language of mankind. Every culture on this gigantic planet has utilized art to teach, to entertain, to illustrate, and to do everything else imaginable. Ancient cave men drew pictures of animals gettin' it on, European renaissance artists painted and sculpted great masterworks of animals gettin' it on, and modern artists draw nude pictures of Snarf from "Thudercats" swallowing Liono's ejaculate. Art has evolved much over the ages, but it has always truly remained the universal language those effeminate European guys claimed it was. The only problem with art is that pretty much anybody who owns a set of hands or claws can draw! Everything from gorillas to lobsters can draw pictures. By golly, even a gorilla holding a lobster clawing a pencil can create art. Universal language be damned, art shouldn't be for everybody and everything! Only those swift enough to wield it as a weapon should be allowed to practice it!

Perhaps the most outrageous thing about art is that even children can utilize it to express themselves. I shouldn't have to explain what's wrong with this, but I will. Children are about half as useful as rocks. What do children do? They cry, they wet themselves, and they ask a lot of questions. It has been my experience that people who ask lots of questions are suspicious. They're suspicious of your actions, how things work, and why things are the way they are. This alone should be a warning signal, because why do they need this information? They don't! The fact that these "children" are also tiny and able to squeeze into tight spaces like ventilation ducts is only more reason to be alarmed. That, and they require food and guidance. Rocks don't require food or guidance. Rocks rest comfortably at the top of cliffs and that suits them just fine. If need be, you can even push rocks off of cliffs and crush the people who hang out below. And let me tell you, only heroes hang out at the bottoms of cliffs. What have heroes done for you? Heroes are too busy saving children from burning tents and unsafe railroad crossings to care about your problems. Well, I'm sick of heroes and I'm sick of children. And don't think I've forgotten about art already, because I'm sick of children messing with art, too! I'm taking art back by using it as a weapon to beat these brats senseless like their parents should have done a long time ago!

How am I going to do this you ask? Very easily! Children lack artistic talent. I can use their weaknesses against them like psychologists use mine against me! I started by searching the Internet for "galleries" of "artwork" specifically created by "children." The results were both shocking and hardly relevant to my search parameters. After a few hours, I realized that I would get better results by removing extra keywords such as "XXX" and "right angles" from my search criteria. Sure enough, my luck improved. It was like I threw my lucky coin into a fountain while wishing upon a falling star and blowing out the candles on my birthday cake. That, and skinning an Irishman. Just the typical stuff you do for luck.

In the end, I found this ghastly gallery of children's art. Better yet, it was children's art dealing with the child-traumatizing conclusion to every marriage: divorce. This site had plenty of divorce-tastic artwork by kids trying desperately to cope. Well, except for the one kid who's apparently not haunted by his or her parent's divorce, but rather by dinosaurs. I'm really not sure what's going on with that, unless dinosaurs are a metaphor for his parent's marriage. You know, extinct! Cha-ching! But enough of my directionless banter that goes on and on and yet never goes anywhere, let's makes these kids cry! That is, if they aren't already crying from the pain of breaking up their families! 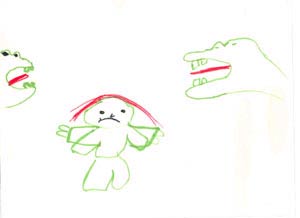 This first image portrays a disappointed child being flanked by two disembodied dinosaurs. The composition is very weak and very basic. The amount of negative space seems less intentional, and more accidental. The child also has quite possibly the worst hairstyle ever: 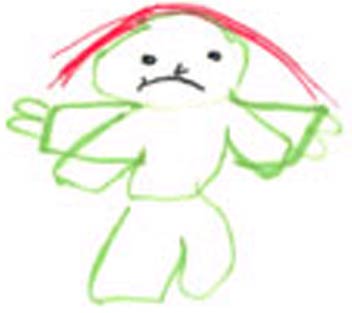 A close up of the little girl indicates that she seems to have four arms. The artist possibly rendered the extra appendages to simulate motion. Is she attempting to fly away from the dinosaurs? If so, clearly the artist is quite naive! Humans can't fly, not even to evade dinosaurs. And let's talk about those dinosaurs: 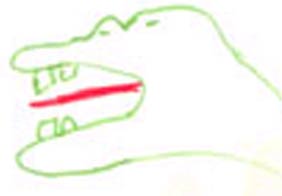 Is that supposed to be frightening? Those four big teeth, tiny eyes, and sword-like tongue do little to intimidate me. Plus, I know that dinosaurs don't exist. Way to be scary, missy. Your dinosaur looks about as fierce as a shadow puppet.

Final Grade: F
Comments: Your artistic ability is sorely lacking. Give up art and realize you will never be able to express yourself creatively. 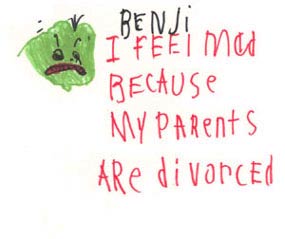 This boy chose to use both words and a simple illustration to express the anger that comes from having your parents divorce. The message is delivered in way that's as primitive as his actual emotional response. I think it's easy to see that this child's parents got divorced because they birthed a failure! 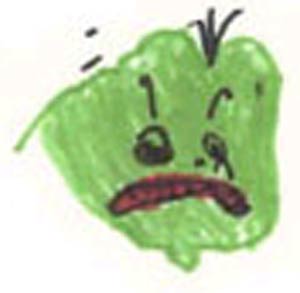 Here we see a close up of the character depicted in the drawing. It seems to be a goblin-like creature with a malformed skull extruding outward on one side. If this is a self-portrait, then I feel sorry for the parents. I would almost suggest this young chap take up writing instead of drawing, but one look at this penmanship and I know that would be just as futile a pursuit.

It's almost as if this child's writing is a cry for help. Inside the harsh strokes and jagged lines that compose these letters is the guilt of being a horrible mistake. This child's evil caused his parents to get divorced. The "Benji" referenced in the writing must be the Satanic voice that guides this lad to commit unspeakable crimes in the dark of night. Frightening, truly frightening.

Final Grade: F
Comments: I've never been one to side with the monster. I didn't buy my angry mob torch to light the fires of tolerance; I bought it to scare the shit out of monsters. This child deserves a lifetime of dungeon confinement! 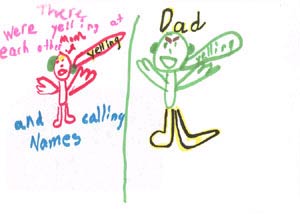 This child chose to recreate a domestic dispute between mom and dad. As indicated by the poorly written text, there was a lot of yelling and name-calling. The dividing line separating mom and dad suggests the severity of their marital difficulties. Each is the opposite of the other, and there is no middle ground or shades of gray. 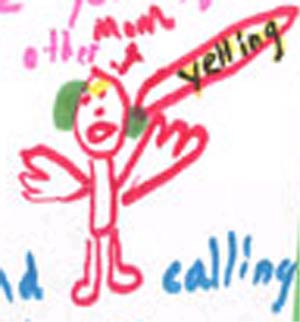 Taking a look at the mother, my guess is that the father was upset that he married a woman whose gigantic arms make up roughly 40% of her body. Her gigantic rake arms were clearly making him feel uneasy and threatened, and so they each began yelling the word "yelling" at each other. Apparently they both were too lazy to come up with anything insulting to say, so they just decided to mention the process of expelling loud sounds in a demonstrational fashion. 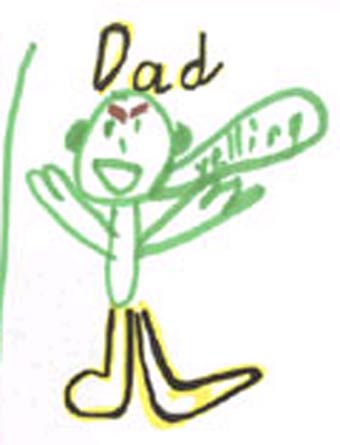 The mother must have been upset that the father constantly walks around with no shirt on and wearing only a yellow pair of pants. Presumably, the father's drinking has led to several accidents that have resulted in him having only five digits, distributed across two hands. I think in this case, divorce is the best solution. Also, it was the kid's fault.

Final Grade: F
Comments: This child decided to place emphasis on the parents instead of on their own shortcomings. Truly a selfish creature indeed! Thankfully genetics have likely blessed this selfish rapscallion with the gigantic flipper arms that both parents seem cursed with.

Looking at these monstrosities, it's not hard to see why children shouldn't be allowed to express themselves artistically. My only hope is that I made some of these youngsters cry, and subsequently reassess their goals in life. I believe it's important that children respect and fear art, like I respect and fear Gary Busey. Remember, children can't express themselves properly, so just don't let them even try. Denying them art only makes them want it and appreciate it more.