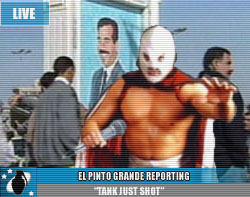 LIVE IN BUGDAD, YOURS TRULY REPORTINGS!Hello friendly reader types, I am given towards filing this monuments report from a satellite phone in the parks in Baghdad from an Abraham tank. Yours Truly is apologizing for not talking lately but I have been very busy with being in bed as a journalist with the United States of America's 3rd Infantries. America is pushing into Baghdad right now as I am typing this although this is not the Televisions and the CNNs so you might not be reading it right as I am writing it. We are taking a break to get our bearings in the middle of Baghdad. Some facts I am giving you are:

FACT ONE:Yours Truly is in Baghdad

FACT TWO:Sadman might be dead. Or not, he might be alive, I am not knowing for certain.

FACT FIVE:I am not taking a shower in three weeks and I feel like unto there is a brick in my pants in the bad part where bricks are not to be going.

FACT SEVEN:Centurion Command is reports that we go anywhere to do whatever whenever.

FACT EIGHT:I am overhearing the guy from CNNs saying on the satellite phone he is having that the Pentagons told someone that we are not inside the Albert Sheed motel.

FACT NINE:This is just in! Tank shot at something.

This is news is just broken right now so it is "news in progress" that I am reporting on. I will try to stay on the lines as long as I can until the moon gets in the way of the satellite phone and I am "oh no" and it break up again. 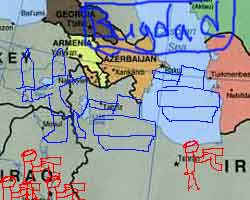 MAPS.Earlier today at 10:00 PM Tijuana time we are driving from the airports recently renamed Baghdad International Airports with a number of the tanks and the smaller tanks that the soldier types come out of. There is light resistance, I saw some mines and some houses and there was a bush on fire and a dog is made to run across the street when is startling explosions nearby. Huge explosions rocking the Baghdads from jets also. I saw some robot airplanes in the sky and I am waving to them from the tank and the soldier is grabbing me by cape and saying "get down are you wanting to get us all killed you idiot who is also best wrestler in history of Mexican wrestling?!" Then they are shutting lid of tank and I just hear the tank sounds being for a while and then they are saying "okay wrestling and sensations reporter on the move El Pinto Grande, your skills are proven and known throughout the lands so we are opening the hutch and letting you out."

There is an oil trench on fire which I am not given to known if it is being set by Iroquois Republicans or if it is bullets hitting it that start the fires. I saw some guys making to do the running around behind walls and the likes but I am not to be positive that they are Iroquois or Americans. Maybe the British are here and I am not being told? Could be! Their costumes were strange and reminded me of the British wrestling type Lord Turnbuckle of Standing Sidekickshire. But I am thinking that Bradley's fighting vehicle was shooting at the soldiers with this and I am thinking I saw a rocket propeller grenade shot at tank.

Okay, I am made to overhear to the CNNs guy who is having a monitors set up and he is seeing that ministers of informations Mohamamar Mohamma, Mohamma, he is being the guy in the soldier uniform and the black hat and is always talking about Iraqs. He is talking about battles that are going on and he is saying "okay, America is being to slaughter and we are giving them the shivers in their huts and they are taking with them explosions and graves." Some of the soldiers are laughing and I am thinking this is funny too because he is reminding me of Bug Queen, manager of Bug Ox who is coming to rings in low cut dress and she is very pretty and she is saying "Bug Ox is being to undefeated and he is crushing all opponents". Let me tell you friendly reader types that any who is given to know the animals of history and Bug Ox's place in them he is a loser and the cowards. He is made to wrestle napping toddler and he is getting pinned by misplaced rattle and blocks with the letters on them. 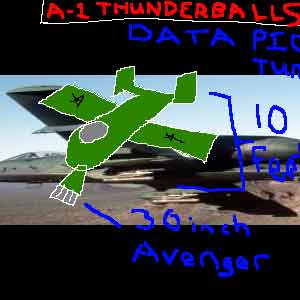 DATA PICTURE.Okay! A-1 Tank Killer is flying overhead. A little bit of info about this is amazing aircraft. It is more than ten feet long and has two engine pods on it. It has a very large gun called the 30 inch Avenger, which is consequently being the exact same name of film being made by wrestler Cheetah Surprise. It was a "blue films" so I won't talk about this any more here on the news of Something Awful. Again I am told like the CNNs, if you are just joining this articles I am in bed reporter El Pinto Grande with the 3rd Infantries which is just driving on into Baghdad right now. An A-1 Thunderballs just shot its guns and missiles at a building, I am thinking this is enemy base but there is a lot of smoke being full up of the air. Could be friendliest of fires.

I am talking now with a Colonel Roger Barley, he is with the 3rd Infantries and he is saying that forces of America are liberating president's palace. I am not knowing when the savage Iroquois are capturing the palace of the president but…oh, no he is making to correct me, this is palace not of America that is captured and now uncaptured, it is actually palace of evil president Sadman Hassane. The American soldiers of 3rd Infantries are made to explore palace and search for traps which are from experiences likely to be the poison darts and the curse of mummies.

There are some reports on El Jazzateria that Iraq may be towards using chemical weapons in this is end game. I am asking Colonel Barley if this is concerned of the Americans and he is telling me that all of soldiers are being to equip their Mops 4 if the warning buzzer is sounding of chemicals attacked. Part of the in bed process Yours Truly is going through before the war is started is teaching how Mops work. Mops 4 is putting on your chemicals hat, your chemicals face mask, your chemicals cape, your chemicals chest oils, your chemicals tights, and your chemicals boots. This is highest mop in the bucket, hahahahah. No, seriously, it is Mops 4, Mops 1 is just chemicals mask. This is what is being called "NBC gears" in the industry. NBC is standing for Nuclears, Biologies, and Chemicals Attacks and it is like a brutal arm bar across neck of chemical weapons.

Now Colonel Roger Barley is walking back to his armors vehicles and the soldier is yelling at me to get in hutch again. Okay, I am getting into the hutch and this is let me be telling you a very exciting moment. We are going to the base of the international press corps now to attack them and they are the enemies of freedoms and, in this moving moments I think it is important to say that nation of Mexico is standing to the side of Americans. United we are standing and if we are divided we are falling and this is the method of free peoples throughout the world. Alright, tank is moving again, and the soldier is yelling at me to put away this phone. I am just like to dedicate this live on the scenes report from Bugdad to my mother, God rest her soul, and my wife and large son. This is a job of dangers but there is a man who can do it and that man is indeed to be Yours Truly.