A fun game to play this week would be to let a random number generator decide which new film you should see. You can win with Rango, lose with Beastly or wind up somewhere in the middle with the others. I wish you luck!

EXPECTATIONS: Rango is something of an enigmatic project that seems to have popped up out of nowhere. It looks very interesting visually, but I don't know much more than that.

REALITY: I like being surprised by a film. I really had no idea what I was in for here, but Rango turned out to be a charming, funny, compelling and hugely entertaining cinematic outing. It evokes classic Westerns that are probably more of your parents' time than yours, so I'm not sure how much this will appeal to kids. This might be the rare instance of a film that adults will take their kids to see and end up enjoying it more than they do.

We are introduced to a nameless chameleon (Johnny Depp) as he acts out various dramatic scenarios with his inanimate friends in the glass terrarium that serves as his home, until a car accident sets him loose in the desert. Now wandering alone, he happens upon the town of Dirt, where he gives himself the name Rango and uses his improvisational skills to spin the fanciful story of how he killed all seven of the Jenkins brothers with just one bullet.

Because of his alleged history of heroism, Rango is awarded the position of sheriff by the town's mayor (Ned Beatty), who charges him with protecting the local water supply. When said water supply is promptly stolen under mysterious circumstances, Rango needs to form a posse and find it, but not before he can come to terms with who he really is. 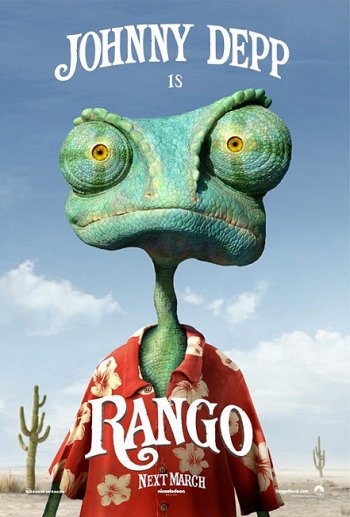 It's nice to know that the art of character design is not dead, especially in a film where every character is not designed to be a toy.The themes of the film are established early on when Rango meets a roadkill armadillo (Alfred Molina) who explains his own personal quest to "cross to the other side." When asked why he doesn't just wait for a gap in the traffic, he replies "It's not that easy... It's a metaphor." You may think that's labouring the point, but acknowledging your film's visual and textual metaphors so readily shows great faith in your audience, and that's especially refreshing for a family film of this type.

That's also the start of why your young kids may not like it. Rango spends a lot of time evoking old western movies and exploring darker imagery and themes than your average animated movie. Gun violence and tales of gruesome deaths are standard fare among westerns, but youngsters might have a hard time dealing with them. The particularly discerning among you might fret that Rango contains a scene in which its lead character attempts suicide while the members of an owl chorus perform with their necks in nooses. Of course, if you're worried about that kind of thing, then I'm sure you never allow your children to leave their homes anyway, so the content of a movie shown in cinemas is not a issue. Rango never underestimates its audience; that's what makes it such a great film.

Not only is Rango an incredibly intelligent and amusing film, but also it's downright spectacular at times. The visual style and the skill of the animation are incredible. Every character is immediately identifiable and entertaining, and the geography of the town of Dirt and its surroundings actually makes sense. There's always a solid sense of where you are and how you got there, which I imagine is hard to convey in animation, or at least not something that everyone worries about. Rango's set pieces never resort to flinging colourful objects around as quickly as possible, instead showcasing a string of quality visual gags based strongly on the characters' defined personalities.

On top of that is a very notable soundtrack. I don't recall ever being able to tell when a composer is just plain enjoying himself before, but you can feel how much fun Hans Zimmer is having here reviving the sound of all these old films. Even outside of the music, you'll notice various objects around Dirt that recall the opening sequence of Once Upon a Time in the West.

I really can't bring myself to say anything negative about Rango. Director Gore Verbinski proves he still has the flair for family entertainment with a darker edge that marked his best previous directorial effort Mouse Hunt, and I mean that as genuine praise for both this and Mouse Hunt. It pleases me greatly to see that he has hung up the Pirates of the Caribbean franchise, freeing up time to explore personal projects in this vein. I hope to see more in the future.

MINORITY REPORT: Figures that the one time Johnny Depp doesn't act like a cartoon character is when the movie is actually animated. -Martin R. "Vargo" Schneider