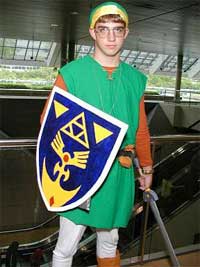 This is not actually Link, but an uncanny impostor!

I regularly measure the interest of any front page update by the amount of email received the subsequent day. For example, if I write an article about Iraq and promptly accumulate 26 messages reading, "u fag, nobody wants to read about Iraq," I learn that the topic of war in Iraq doesn't particularly appeal to many readers at the current time. If I instead update the site with an essay detailing my intense hatred for Real Network's Real Player One software which was spawned from Satan's bulbous, rancid crotch, and the following day I find myself deluged with "u fag, nobody wants to read about Iraq" emails, I learn that I am, in fact, a fag of some sort. Now while this feedback doesn't normally affect me, as I'm comfortable enough with my sexuality to ignore the correlation between Iraq and the urge to lodge a man's penis in my throat, it does indicate what readers enjoy seeing on this website. I recently spent roughly $15,000 to hire an independent contracting firm which specializes in data analysis so they could take all my incoming email, sort them out, and reveal what subjects interest you, the reader. After weeks of "analyzing the fuck" out of my data, this company provided me with the following useful list which details the top 10 most popular subjects according to my reader-submitted email feedback:

1) Vague, incomprehensible instructions detailing the complex procedure to make my penis magically grow much larger than its current size. I believe the process involves smoke and mirrors and surgically grafting somebody else's dick onto my crotch.

2) Vague, incomprehensible instructions detailing how I can "work at home and become my own boss" simply by sending out approximately 19 hundred million billion unsolicited letters which explain to people that they too may become their own bosses if they were to simply send out 19 hundred million billion unsolicited letters. This would create a world full of bosses, and I don't think I feel comfortable with that, as mini-bosses are difficult enough to beat in this day and age.

3) Warnings about how my computer's "data" (I think that means "pornography") currently resides in a high state of risk, as hackers and robots and cyborgs and mutant spiders from the future possess the power to somehow physically steal my entire computer over the Internet. The only way to secure my "data" (I think that means "Bewitched fan fiction") involves purchasing a suite of software programmed by such industry experts as "JimSoft" and "GlobalMegaUltraSuperCool Inc. Software Inc."

4) Mortgage rates have hit rock bottom and currently float somewhere between 0.00003% and -192%. If I fail to purchase a house by seeking financing through my close pals at x83sfsd92m@hotmail.com, then my future will consist of a distinct lack of homes and I'll undoubtedly contract some rare form of ass cancer. 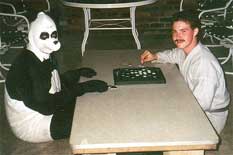 I'm fairly sure this is illegal.

5) A frequent amount of "hot action" occurs between a mother and her daughter, and this "hot action" demands my immediate attention and credit card subscription. I honestly don't have any idea what they refer to here, but I can only assume I'd be paying $19.95 a month for images of a mother and daughter baking brownies or maybe cleaning their closets. If I fantasize enough, perhaps I could imagine they're cleaning MY closets! Now that's hot, especially because I have a garbage bag full of machine gun bullets in my bedroom closet!

6) Any prescription narcotic, ranging from Valium to that one drug which caused all babies born in the 1970s to come equipped with a bonus set of 13 additional arms, can be purchased by simply mailing my credit card details to a company residing on some small, possibly radioactive island with a name like "Gynfiztarmaria."

7) If I fail to purchase a truck palette full of printer toner cartridges, my apartment could possibly explode in a fiery inferno of doom, my parents will disown me, and the NSA will arrest me for breaking some highly crucial Homeland Security law like "taking a really long shower and thereby allowing terrorists an opportunity to break into my apartment and set off a dirty bomb underneath my DSL modem."

8) I am a person of the homosexual persuasion.

9) "¿ÃÕ ÁÕàÇçºä«µì E-commerce à»ç¹¢Í§·èÒ¹àÍ§." I have employed a nationally recognized team of scientists and homeless people claiming to be scientists so they may determine exactly what "¿ÃÕ ÁÕàÇçºä«µì E-commerce à»ç¹¢Í§·èÒ¹àÍ§" means and why I receive this important message on an hourly basis. So far the results have been inconclusive, although one of the homeless people submitted a report which read, "ebb the FUCKING PONY" and had the word "GOVERNMENT" scratched out with somebody's blood.

10) The only interesting I've ever written in the entire history of the universe has been about my cats. 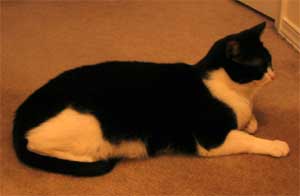 These conclusive results have proven many things to me, mostly that the concept of paying people to analyze my email falls into the category of "a bad idea." However, these intellectuals and unshaven louts who used my carpet to wipe the soot off certain unmentionable parts of their body have proven to me something that I already suspected: my cats are the only things in my life anybody in this plane of existence cares about. Each and every time I detail the adventures of "Cat" and "Stupid," I am deluged with up to three emails exclaiming "your cat article was the funniest thing you've ever written," "I loved your cat update," and "y do u write about ur cats u fag?" This type of positive reinforcement leads me to believe that, in addition to my sexual orientation leaning towards the homosexual persuasion, Something Awful attracts a large amount of cat owners. Now before I truly dive into the rancid heart of today's update, I would like to state the following theory I devised after drinking a large amount of gin from a Citgo mug which featured a colorful image of highly Japanese baseball player Ichiro Suzuki: cats exist in an Aristotelian state of either "alive" or "furniture."

Anybody who has failed out of a rudimentary science class knows about the tall tale of Schroedinger's Cat. For those of you not familiar with this scientific study, let me provide a brief overview. On June 7 of 1935, Erwin Schroedinger devised one of history's most puzzling paradoxes, ranking right up there with how John Kruk has so far failed to devour the entire planet Earth. His theory, in short form, challenged my aforementioned Aristotelian logic by placing a cat inside a box. The interior of this box contained a poison pellet (radioactive isotope) which had a 50% chance of breaking and, therefore, killing the cat or at least giving it incredible superpowers which it would then use to solve major metropolitan crimes. If the cat occupies the enclosed box with the poison pellet, and outside observers lack any way to determine if the pellet has exploded, does the cat occupy the "alive" or "dead" state? Fortunately, I can easily solve this problem, and if some famous scientist fag would've bothered messaging me, then I could've explained it to him and I would have an article published in Scientific Smarty Pants American Webmaster magazine. Schroedinger's Cat, while inside the box o' death, occupies the "furniture" state of being. 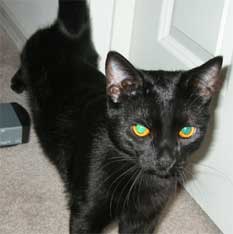 When you first purchase a young cat (known as "a kitten" to scientists and spacemen), it is obviously "alive." If you fail to staple its paws to the carpet, the kitten will run around like an idiot and engage in various kitten-like activities, such as jumping into walls, staring at invisible entities floating around your head, and eating threatening enemies such as plastic candy bar wrappers and pens. When you attempt to sleep at 3:00 AM, the kitten will invariably express the fact that it is "alive" by producing a series of sounds that resemble an adult weasel being slowly crushed inside a trash compactor. When you wake up, the kitten will show you how "alive" it is by staring coldly into your eyes and attempting to steal your soul, possibly by using ancient Indian magic or mitosis. When you try to work or relax, the kitten will demonstrate that it is still "alive" by chewing on electrical cables and spending roughly six consecutive hours moving all the cat litter in its box from one side to the other, then moving it all back to the position it originally occupied. Kittens find these types of activities very fun and amusing, mostly because they have the IQ of a trombone. However, kittens undergo a transformation sometime in their lives when they metamorphosize from "alive" to "furniture." For the sake of simplicity, I will include the state of "dead" under "furniture," as I am fairly sure most of the furniture I've seen in my lifetime has been dead, except at that one weird fetish party I attended in college where I blacked out for seven hours and woke up in the back of a pickup truck the following morning.

Like any good scientist or auto mechanic, allow me to provide some experimental proof to support my ascertainment. Three years ago or so, in the year 1986 I believe, I purchased a cat (whom I named "Cat") from the animal shelter. He enjoyed running around, occasionally into the window, and generally acting as if his blood has been replaced with a mixture of lava and gasoline. He was very much "alive" and expressed this by doing things like jumping on my lap and then digging his claws into my thighs to indicate he had grown tired of resting on my lap. He stayed "alive" for a few years, but one night he suddenly experienced a change in state and turned into "furniture." From that point on, his primary goals included sleeping, sleeping on top of a box, sleeping under a bed, sleeping near a box besides the bed, and shitting. As you can tell, this state of being differs from the previous "alive" status. In theory, I could place Cat on top of the television set and he hypothetically would fail to move for at least one decade. The only ways to physically move Cat from one location to another is by either employing a complex series of levers and pulleys or lighting a garbage bag on fire and chasing him while screaming like an Asian rape victim.

To make up for Cat's change into furniture, I purchased a fresh, new kitten about a year ago which I named "Stupid" on account that he's very stupid. Stupid likes to eat cardboard. Stupid enjoys staring at the walls for six minutes, then suddenly deciding to run in a random direction at 130 miles an hour. Stupid provides me with regular updates confirming he is "alive" every 10 seconds by making horrid, high-pitched screeching sounds. In summary, Stupid is stupid. However, as mentally deficient as Stupid may be, he can still be considered "alive" in just about every sense of the word. He has not yet made the stunningly horrible transformation from "alive" to "furniture" yet, and for this I thank whatever masochistic, bearded white god that placed me on this Earth.