The Lost Books of the Bible 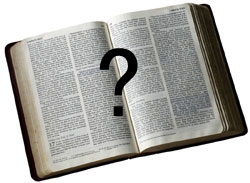 The Bible is not so much a cohesive single work as a collection of documents or "books" from a variety of sources. Many of the books of the Bible were not written at the same time, even when they come from the same Testament. The Bible is a holy Trapper Keeper full of collected religious texts.

You might be wondering what happens when some new guy gets it in his head to write a book for the Bible or, more likely, a previously forgotten text is rediscovered. When that sort of thing happens there is a holy editorial review board that swings into action. The composition of the board depends on what faith is considering a revision to their Bible, but it is most famously Catholic.

These guys get together with the text in question and they study it. They look into its origins and history, they analyze the message, and they see how it fits in with the rest of the stuff in the Bible. If they do not like it, then they throw it away and it is considered apocryphal. That is what usually happens. If they do like it, they make it a new book in the Bible and it is considered canon.

Fans of pretty much any popular science fiction series are probably familiar with the term "canon". As Star Wars or Star Trek became popular the companies behind them realized they could make a fortune with books, comics, and videogames. Some of these works can be a little unusual or even retarded, so the guys who make the real important movies and TV shows pretend these things never happened.

There are literally hundreds of fascinating apocryphal texts and many of them were seriously considered for inclusion in the Bible. Many more are lost to the ages, but today I would like to celebrate a handful of the most interesting lost books of the Bible.

Reason for omission: It is the holy text of a sect that has split from the Christian faiths and worships strange bronze idols that resemble a peach and flow with sparkling wine.

67 Then did the sweet swishers hove into view and they did inspire K-Street to drop his stunnas on his nose. And K-Street did prognosticate to his nicca Chooch that the Lord had done ordained Chooch lay out that sizzlin pillow and light up with some.

68 And Chooch and K-Street did burn up that whole pillow. And Chooch did say, Lo I am gurp. And K-street did second he was gurp as hell. And then Chooch's phone did blow up and it was some bitch yelling.

69 And K-Street sayeth, Lord Almighty God, if that Trina again I will murph that bitch. And Trina did hear K-Street speak and Trina did start all over again with Chooch. And Chooch desired to hang up, but he could not for Trina did know where he dwelt and would key up his Lexus if he trifled with her.

Reason for omission: Of indeterminate origin and vexingly bizarre to the point of being somewhat terrifying. 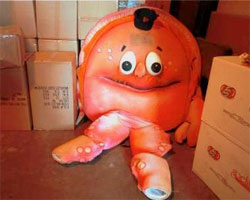 15 Then did the sea boil and hiss and birth upon the land the lobster and the shrimp and the urchin. And the prawn did gnash its mandibles at the feet of the Almighty. And God did reach down from firmament into the brine and he did lift up the crab.

16 Then did the crab look upon the face of God with compound eye and it did see the Lord reflected seven upon seven times. And the halo did circle the crab and one pincer did grow larger than the other and the crab did lose its tongue and words.

17 Then did the Lord return the crab to the shores and the other crustaceans did look upon the crab with envy, for he was favored among God's children. And the crab did speak in ciphers drawn upon the sand, and these words had the power to blind a man and make blood flow from the nose of a cat.

Chapter 9, the book of Crustaceans

Reason for omission: Represents the work of one of the most notoriously inane prophets and holds little meaning for the lay person.

4 Said Kayla to the Lord, Oh my God. And she did go to into the house of Sephora and she did see the exact green eye shadow Martine wore to Sea Ball. And she did take a picture with her phone and send it to Christine just to be certain.

5 And lo, Christine did confirm that it was the same eye shadow Martine had worn. And Kayla did say unto the Lord, Oh my God, oh my God. And she purchased the eye shadow and it was good.

6 Then Kayla did walk five cubits within the Mall of Judea to Abercrombie and there was a sale on Capri pants. And Kayla did not enter or buy any Capri pants for her ass felt fat. And she did remember there was a Bally's in the mall and she spoke aloud that she would do her spinning after a bubble tea.

Chapter 3, the book of Kayla