Return to Outer Space: The Revenge 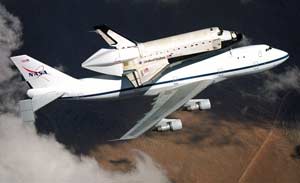 A space shuttle during the physical act of love.Today marks an important step in mankind's murderous relationship with outer space. On this exciting day we are blasting man back up into the cosmos in one of NASA's space shuttles and hoping man does not blow up in the process. It has been over two years since the last shuttle trip into orbit, and that trip ended on a very fiery sad note. Lessons were learned and precautions taken, so things should be different now.

When the debris rained down from the Space Shuttle Columbia like a cosmic piñata, it seemed to signal a dark age for space exploration. At the time, I took it with a great deal of indifference. I listened to the Bush's speech, watched the news all day, and didn't think much. Now I don't want to say that I didn't care that 7 people died in the process, but people die on a daily basis doing less risky things like "existing." It was kind of hard to get too worked up about it when CNN was busy erroneously reporting that the space shuttle was traveling "nearly 18 times the speed of light" when it went boom and asking questions like, "will man ever go into outer space again?" Little did CNN know that man was still in space, onboard a top-secret international space station called the "International Space Station."

I for one am very excited about the return of the space shuttle. After growing up in the age of routine space missions, I started to take them for granted. It seemed like every week there was a new story about something NASA did with ants or something NASA was thinking about doing to ants while in space. After a while you just stop caring. Unless they are using stem cells to grow giant ants that I can ride around on and use to fight off my enemies, what's it got to do with me? A lot of my space apathy was a result of the lack of an ambitious objective on the part of NASA. It was neat what they were doing, but it failed to really evoke any sense of importance in the greater scheme of things. Even still, we learn a lot from going to space, and I consider the insights into our world and everything around it to be as invaluable as a serum that turns cancer into money.

Space fascinates me, mostly because it's a veritable treasure chest of mysteries and important gasses and glowing rocks not available in retail stores like Spencer Gifts or Wal-Mart. Sure we've got robots in space. We've got all sorts of probes and a pair of adventuring robots running around poking rocks with drills and generally just demystifying Mars in a rather boring way. While robots can easily kill mysteries with boring answers, they can't do all the things we can. While the Earth is big, there is only so much it can offer us on our exciting journey towards death. This all but necessitates forays into space, where we can die someplace new and cold and different, far from the home we love so much. Some day we're going to have to leave Earth, our celestial grandma's basement though it may be.

We've got a long way to go, though. After decades of research, development, and execution, we are still horribly bad at leaving the planet. It's not like science fiction where everything works great and with lasers. The amount of systems and subsystems that power and maintain the primitive space shuttles are mind-blowing, so it's fairly easy to understand the reasons for the recent shuttle downtime. NASA has been working very hard to upgrade the space shuttle and make safety improvements I was able to download an extensive .pdf file from the internet highlighting these exciting upgrades, the most exciting of which I have summarized here.

Headlights
What a lot of people don't realize is that space is very dark, even with plenty of light sources such as stars and ghosts. Thankfully, with the addition of headlights, shuttle crews can now orbit safely even at night. The lights have both a regular and high beam setting, the latter of which are not to be operated when other spacecraft are visible.

Air Conditioning / Fireplace
In order to get to space the shuttle has to ride a massive explosion up for several minutes. Then on the way back it has to withstand a fiery reentry. This excessive heat results in a lot of sweaty situations for the astronauts on board. Thankfully all remaining shuttles are now outfitted with air conditioning to keep things pleasant. Evidence has shown that hot conditions can be in extenuating factor in causing stress and anger, which in turn increase the likelihood of domestic disputes and possible violence. That certainly won't happen now. Also drinks stay cooler longer, reducing the need for outer space ice cube production.

We must recognize the temperature duality of space travel, though. Not only does it get hot, it also gets very cold. For those more chilly moments, the new shuttles are equipped with a fireplace and chimney. The cargo bay provides ample space for plenty of potent artificial fireplace logs designed by the Japanese Aerospace Exploration Agency.

Dashboard Compass
Space is a vast and infinite frontier, making it incredibly easy for a space shuttle crew to get confused and lost, thereby drifting away from Earth. But with a handy new dashboard compass astronauts can always keep track of which direction they are going and which direction the Earth is. This will also help them avoid staring into the sun, which always rises in the east and is much more visible in space.

Sonar
Space is not only full of natural debris, but it is also full of unnatural debris, such as giant frozen chunks of urine left over from past space missions and parties. To protect to the shuttle from impacts, NASA has installed a state-of-the-art sonar system in the shuttle to monitor for incoming objects that may pose a threat.

Lady's Room
Believe it or not, until recently the space shuttle only had a men's room, making it extremely difficult for female astronauts. In the past they would have had to execute a daring and dangerous 3-hour space walk to an external outhouse connected to a robotic arm dangling precariously from the open cargo bay. It was a shameful situation in general. Now the shuttle fleet is equipped with a spacious lady's room, complete with makeup mirror and zero gravity diaper changing station. Now female astronauts can maintain their prettiness and still have time to fulfill their womanly duties.

Robotic Poker Arm
One of the most exciting developments to the space shuttle is the addition of a Canadian designed SRCMS (Shuttle Remote Card Manipulator System) robotic arm created specifically to play poker with the astronauts. Capitalizing on America's love affair with poker, highlighted by such shows as "Celebrity Poker Showdown" and those mind numbing poker games aired on ESPN, NASA will broadcast outer space poker games to classrooms throughout North America via NASA TV. These games will not only demonstrate how astronauts operate cards and chips in a zero gravity environment, but also the complex artificial intelligence behind the poker arm.

A secondary function of the SRCMS is to simply poke things.

The advancements to the space shuttle fleet are just the beginning. There are still more improvements to be made, such as making the shuttle fleet compatible with the Americans with Disabilities Act of 1990. However, we must remember that the shuttle fleet will ultimately be retired in favor of more efficient spacecraft, just as soon as somebody invents the technology to power next generation space vehicles.

Beyond that, George W. Bush, the mischievous boy president, has given NASA a new mandate that not only entails a return to the moon, but also calls for a manned mission to Mars. Bush feels we have unfinished business on the moon, what with Neil Armstrong leaving his car keys there and all. From there, Mars seems like a practical goal since there's still some decent mysteries there not spoiled by those damn robots. Besides, the sooner we get to Mars, the sooner we can enjoy the kind of horrific accidents envisioned by the brightest minds in science fiction. Accidents that threaten to kill us all!