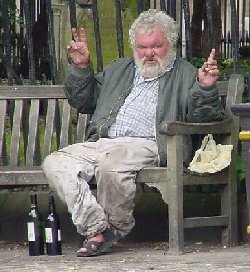 I recently had the pleasure of attending one of the largest Midwest beer tasting events of the year, sampling hundreds, if not thousands of beers over a 48-hour period. I set out to keep a detailed and fair review of all of the microbrews I sampled, but somewhere into the 10th hour I lost track of things and woke up the next day curled up in a monster truck tire and covered in my own vomit and feces. It was a wonderful event that I will cherish always, and will think about fondly while serving my community service for punching the mayor's dog.

I know many of you are like me with it comes to beer: a terrible snob who looks down on the lowly cretins drinking Bud Light and Miller, and drink only the finest fermented grains seasoned with Turkish figs and aged for 10 years in a dead mule's colon. Good news: out of all of my scattered and burned notes from the weekend, I have recovered a few of the reviews of some of the gourmet beers I encountered. Join me, fellow beer nerds, as we tread into the world of crushing alcoholism in the disguise of style and sophistication.

Black Sludge Port
This heavy port is made by the good folks at the Smelly Bastard Brewing Company in Little Falls, Wisconsin. Drawn from fermented licorice roots and boot laces, and then strained through a collection of 1972 Green Bay Packers jock straps, this one has a big bold taste that is still smooth and frothy. There are also hints of chocolate, coffee beans, road tar, and axle grease to give it a malty, full-bodied flavor, and make it the darkest-colored beer at the event. When one drinks a Black Sludge Port, it is best to hold the glass upside-down and just let it slowly drip into your waiting, quivering maw. Another method is to eat it with a spoon and wash it down with a lubricant, like KY Jelly. Be aware: there is a warning label on the bottle, saying that Black Sludge Port may cause bowel cancer in children and the elderly. Can also be used to patch potholes, or used in physics labs to study the properties of dark matter.
Rating: 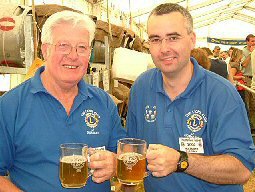 The man on the left tortures small animals, and the guy on the right kisses robots.

Rotten Carrot
Most ales are made from fermented yeast, barley, wheat, and even rice. Thanks to the recent craze of low-carb diets, the Pretentious Brewing Company in Ann Arbor, Michigan created this drink entirely out of decomposing carrots with hints of oatmeal hops. Advertised as "the choice for sensitive beer drinkers", its immense popularity is due to the fact that Ann Arbor is full of limp-wristed faggots who wear hemp and ride contraptions called "bicycles". This was a terrible ale and I pretended to drink the rest of it but really dumped it in my wife's purse while she wasn't looking.
Rating:

Huge Mexican Lager
Microbrews from Mexico are extremely rare. This is because of the Modolo crime family, who make the popular Corona and many of the other well-known beers from south of the border. They rule the beer industry with an iron fist, dictating the business and squashing all attempts at upstart microbrewing. But one company as brave enough to stand up to the Modolo bullies. Their name is the Orange Sombrero Brewery, and their premiere beer -- the Huge Mexican -- became an instant hit in the country and abroad. This led to the violent “Corona Wars" of 2005, causing the deaths of 32 people, including ex-front page writer Zackary “Spokker Jones” Gutierrez who was later buried in the Something Awful cabbage patch. After the bloodshed, there was a truce between the two gangs and the Orange Sombrero Brewery was allowed to distribute its Huge Mexican Lager. I tried it, and it tastes similar to Corona but even more piss-like.
Rating:

Paint Thinner
I'm not really sure, but I have a strong inkling that this clever name isn't as clever as it seems. Shortly after handing over one of my drink tokens for a six ounce tasting glass, the scruffy servers behind the booth of the New England Classic Brewing Company bellowed in laughter. This ominous scene only escalated after I downed the foul smelling liquid and reeled from the zesty flavor. Soon I became dizzy, my knees wobbling to and fro. It felt as though my stomach lining was disintegrating, causing me to collapse in the corner of the tent in a fetal position. The servers chuckled at my plight and hosed me down with even more of the foul liquid. Darkness took me and I strayed away through thought and time. Stars wheeled overhead, and every day was as long as a life age of the earth... but it was not the end. I felt life in me again. I woke up as they were pumping my stomach in the emergency room, and telling me to avoid drinking paint thinner in the future.
Rating: 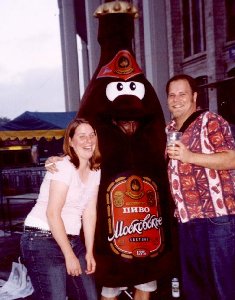 I thought this was a real talking beer so I ripped his head off and drank his blood. Whoops!

Sandy Vagina Stout
A pleasant yet irritating stout that blends natural hoppy malt flavors with a mix of concentrated fish oils and barley yeast. It won the bronze medal at the Most Disgusting Microbrew flavor awards last year. After choking down all 6 ounces, I asked the brewer what materials were used in the brewing process. The old man growled at me, revealing a line of rotting black teeth that glistened like slugs in the waning sun. Then he head-butted me and stole my BBQ pork sandwich.
Rating:

Indian Spirit Special Lager
This is the best microbrew I encountered during the festival, and I have to say without a doubt that it is the best beer I have ever tasted. Made by the Black Bear Brewing company from Minnesota, this is a light but smooth lager that tantalized the taste buds and swept me away to a faraway land where one can dream of a simpler age of refinement and honor. The swirling foam reminds me sandstorms of North Africa, hunting great elephants with my trusty rifle, and sawing off their tasks for the black market trade. Aye, a filthy mouth such as mine was undeserving of such a brew from the heavens. I fell to my knees before the serving booth, my cheeks wet with tears of joy, pouring another cup of frosty drought down my gullet. I felt the Indian spirit rushing through me like a wolf on the hunt. I was one with nature, one with God, and one with the mother earth.
Rating:

Editors note: After some research, I found out that Indian Spirit Special Lager was really just Budweiser repacked in some really looking cool bottles.

Overall, I found that although American domestic beer is barely a step up from skunky tap water, many microbrews try to be so unique and special that some of them taste like a dirty sock in a blender. Of course, I drank them all anyway, because I need my booze, but I did become very ill and spent many hours lying in the sun getting melanoma as seagulls pecked at my bloated gut until the putrid innards within burst forth onto the beer soaked grass, like some offering to a pagan god whose name I dare not utter. I walked it off the next day.

I hope you enjoyed this Taste Fest review, unless you are straight-edge and only drink Tang, in which case please go change your diapers because being sober is for children. By the way, anybody want to donate a liver? Please help me.

The grand adventure of Pork continues as he tackles the important current events and makes us think in the process. Each new comic comes with THIS DECODER RING that won't decode anything but might give you cancer.