Singling out Miss Destructo solely in this regard is perhaps unfair. The Internet already offers a rich subculture of media and lifestyle bloggers who provide content indistinct from corporate marketing, to popular acclaim, as if most readers generally enjoy street team pitches so long as it's not readily apparent how the blogger in question makes any money from them. It doesn't matter if someone's words describing a new "WebTV" show sound exactly like the brainstorming of a low-level functionary at a large media conglomerate, so long as the author cleverly dupes his audience via the camouflaging effects of a retarded haircut that ends job interviews. At this point it's relatively easy for corporate interests to influence Web 2.0 figures without the shift in their economic interests substantively altering their content.

What separates Miss Destructo from most media and lifestyle bloggers, however, is that they usually make at least token attempts to couch shamelessly linking to products or announcing their presence at some quotidian event teeming with dorks in ways that are entertaining. Something's still alive down there—like the screaming vomit-smear manifestation of Voldemort's soul on the astral plane. Cory Doctorow might be a contemptible conduit for selling Android phones, but at least he also writes contemptible fiction. Every time you read Gizmodo, it's like sitting down to watch 30 minutes of commercials that you somehow TiVo'd off G4, but there's some craft involved. Those writers inject wit and humor sometimes, and they still have to file deadlines and chase down—or steal—sources.

With Miss Destructo, there is no there there. A brand name sits atop the screen; another brand is linked, and then the piece concludes with a branded sign off without intercession of consciousness of any kind. It's as if the Web site Talking Points Memo had one post per day that was literally a scan of a faxed talking-points memo, only at the bottom there was an animated gif of "DeeCee," the single-and-loving-it Washington politigrrrl, dancing in dizzy and pointless circles, wearing the site logo on a spaghetti-strap tank top. This is a site that represents the obverse of those cans in Repo Man labeled "Drink" that had a generic refreshment in them; instead picture a cylinder named "Miss Destructo" that contains nothing at all. If it were a half-hour TV series, it would include 22 minutes of ads with only 8 minutes of show, and those 8 minutes would feature the show's name in a chyron at the top of the screen, while the middle of the screen gave a real-time display of its ratings.

Given the crassly proud vacuity of the site, one has to look elsewhere to find any purpose for it. But turning to its creator for meaning is an equally fruitless exercise. It's necessary to project something onto Miss Destructo herself to generate even a two-dimensional human being. This blank canvas appears thousands of times more than the blank canvases that are the blog posts—and other assorted bits that should have words that mean things in them—inviting others' speculation and invention to do the work that's normally reserved for character. Mediocrity requires aloofness to preserve its dignity, but it needs fey art posturing to suggest sophistication.

There are endless posed shots and effected insouciance, unsettlingly identical in terms of angle, expression and dead-eyed stares across two years and hundreds of images. One is left with the kind-of patina of what might be a persona, the beguiling pixie art girl, off on a revolution you don't know about. It presents the old tripartite fallacy of the cute-ish high school white girl who finds herself choosing to take up social space only marginally outside the extremely comfortable mainstream: that Holly Golightly was interesting; that Holly Golightly can change people's lives because they will pay attention to her for some reason; and that looking somewhat like her achieves both.

This is revolutionary life via the MySpace Angle. It's armed by the Weapons of Miss Destructo, a series of blog posts humping products and businesses, which are then tweeted about, which result in more followers and retweets and invitations to promotional events—from which the repulsive circle of soulless promotion-as-revolution begins anew. To damn it by calling it a corporatist abortion is a terrible miscalculation. Describing it as exactly what it sets out to be only validates it and further reifies its intended effect.

The first few times I read it, I was confused as to why this site was titled Destructo Deviations. Then I remembered that a "Deviation" is the name for each new piece created on DeviantArt, the home for the budding high school aesthete who wants the freedom to create anything and the desperate preservation from laboring to improve or encountering real criticism. It's the home of hermetic self-indulgence for art of no effort or value in search of praise, subscription and, ideally, purchase. And, bam, there we are. This might seem like an uncharitable reading, "What's in a name?" after all. Then again, this is a pseudonymous Web site created not to protect identity (her real name is available on her site and Twitter) but ostensibly for the purpose of making it seem slightly less narcissistic when she regularly refers to herself in the third person: a brand divorced from personhood so well that anyone can stand outside it and talk about it, even her.

But in reading occasionally, over a year, I realized how apt that Destructo Deviations name is. The site is a small, mean larval ad company struggling to evolve into a big ad company by promoting a product that is itself. As it grows, it will shed useless deviant strands of DNA, unnecessary and costly appendages that look neato but do nothing—things like content and ideas, the haircuts of the intellectual and spiritual world. Eventually, with any luck, they can be shorn completely and leave the finest and most revolutionary creation, a fully functional marketing organism, living girly tissue over advertisement endoskeleton: Miss Destructo. 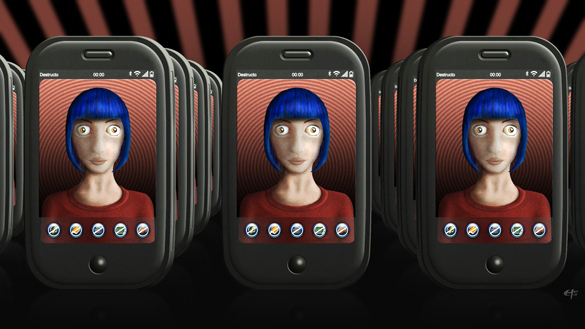 Thanks to Ian at FusedMuse for the images!