Something heartbreaking has happened. It's so bad I almost can't describe it.

My beautiful, precocious and gentle little boy, Dylan, was assaulted at the Cabela's.

Dylan likes to play in puddles. He likes to sing along to Yo Gabba Gabba. He is talkative and silly and he has a cute pink shirt he likes to wear. He's not even three yet and he is very boyish, he just really likes his pink shirt.

As a good mom, I project all of my fears and political causes onto my child, who has become deeply concerned about eating local and Sea World treating whales better, and it is important that he expresses himself exactly however I want. Every child should have that freedom.

We were at Cabela's to buy some rain boots for Dylan and he was sitting in the cart minding his own business. He happened to be wearing his favorite pink shirt. We found the boots he needed and we were making our way towards the front of the store when a very large and fictional woman in an American flag t-shirt loudly asked, "Is that a boy or a girl? I can't tell the difference in that gaAAaaaAAAAAy shirt."

Well, this pretend woman laughed in this very derisive, mocking laugh and she leaned down over Dylan and she said, "Only F-words wear pink, B-word."

She blew a slide whistle so the note ascended and she stuck out her middle finger in perfect time to the note.

I was aghast! She had just said two of the nastiest words that I could have imagined and then assaulted me with a whistle. Shocked, I hurried past her towards the checkout when I imagined a man's voice shouting, "THAT AIN'T A BOY!" It was a very Southern sort of voice and the man was clearly a gun owner. He had a tangly beard and red eyes and a huuuuge Jewish nose, but coming to a point so it was more like a witch. 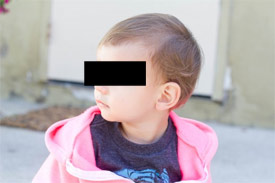 My innocent baby. Not pictured: me, imagining horrible things happening to him.This man bared his fangs at Dylan and he said, "I EAT PIECES OF SHIT LIKE YOUR BABY GIRL FOR BREAKFAST."

"You eat pieces of shit for breakfast?" I asked in disbelief.

This imaginary man grew very angry and he slapped my beautiful, innocent baby boy right in his mouth. All Dylan wanted to do was be himself and I imagined this man hitting my little baby son. So Dylan was screaming. I was in tears. Nobody was offering to help or doing anything.

We rushed into the checkout and I saw that the checkout clerk was a tangly-haired, red-eyed, black teenager who looked very thuggish. I could smell the fug of jazz cigarettes about him. He tilted his hat to one side and he said, "Your f-word child is upsetting the other customers because he's too ugly. Get him out of here."

Dylan was perfectly fine until that moment and now, after hearing that, he won't come out of his room and when he looks in the mirror and cries and calls himself "The ugly fag child."

It was worse than the time someone saw I cared about the environment and GMOs and they maced me and gave me a whole bunch of imaginary cancer.

I have set up an indiegogo fundraiser to help pay for a trip to Disneyworld to help Dylan forget about these awful events and all of his cancer that I imagined. The good thing about Indiegogo is that I can do whatever I want with the money, like buy a bunch of pitbulls. I know one thing for certain: Cabela's lost a customer when they asked my beautiful boy to leave. I'll be taking this one to the Twitter and the Facebook if any of you want to speak out with me.