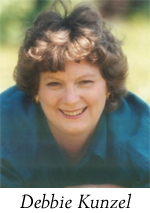 If you know me, then you know that technology is about as welcome in my house as my mother-in-law. And while Ethel sometimes brings over delicious lemon bars that are best eaten with hot coffee and a dash of suppressed anger, the only thing that this nameless, faceless digital beast called technology brings is pain, strife and vile e-curses. I know what you're about to say: "But Debbie, you write a successful online column featuring commonsensical advice straight from a mom's intuition and your latest book was just released in paperback!"

Rest assured, dear reader, that each of my "Mom's Eye View" columns are written by hand and then mailed to their respective publishers after I drive to the post office and give my mail to an actual human being--as strange as that may sound to most of you out there! You can take your modern ways and stuff 'em, mister; this gal doesn't mind taking a few extra hours and a trip to the gas station just to do things the old-fashioned way. After all, that's the only way that makes sense.

Strangely enough, there are quite a few bad apples out there who don't see things my way--and a few of them can even be found in the Kunzel clan! When my little boy Dylan was ten, I bought into the techno-propoganda spewed by that child-brainwasher Bill Gates (shame on him!) and purchased a computer for our household, just so our family wouldn't be without the tool that tempted us with the unnatural sight of flying toasters and promised to make us all smarter, stronger, and richer beyond our wildest dreams. When we brought the computer home and opened its massive box, I immediately threw up my hands in anguish at seeing the many pieces that demanded us to assemble them. "That's it for me," I exclaimed, and I sat in a comfy chair to watch TV--not in front of a keyboard, mind you--with a glass of iced tea as my husband, Don, and Dylan put together the electro-terror-machine. A few months passed, and I decided to venture into our den to use this technological invader--I had just tried Chinese food the week before (and I did not like it!), so I was feeling a bit adventurous. 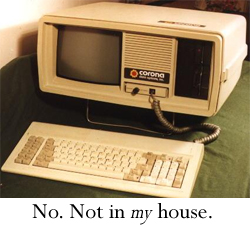 A brief thirty seconds later, I was flushed with rage and lamenting the day I decided to "enrich" my family's life with the 1s and 0s of Satan's propaganda. I had sat down at the personal computer, fully intending to write a letter to my friend Carol in Florida. Hello, science? It's Debbie. I thought computers were supposed to be smart. If this is true, then why is it that when I type "I would like to write a letter to my friend Carol, please," all I get are a chorus of beeps and boops, adding up to the soundtrack of my frustration? Still, even after suffering such torment, I was determined to see if anyone in camp Kunzel was able to use this waste of chips and CD-Roms.

I waited for Saturday morning, and peeked in on my son, clacking away at the keys like some sort of robo-Liberace. Dylan was quite accomplished; in the course of an hour, I watched him write a report for school, edit photos, read about Benjamin Franklin, send an electro-message to his grandma, and create a secret code that only he and his father could understand. And here I was, unable to get the gosh-darn thing to write a letter to my ungrateful friend Carol! Needless to say, Mr. PC was picked up by the garbageman the following week. I wasn't about to live in world where my ten year-old son could possibly know more than me--yet millions of adults allow the parent-child power pyramid to be subverted every day by these e-monsters. For them, I have three words: "Shame on you."