On Etiquette and Good Behavior 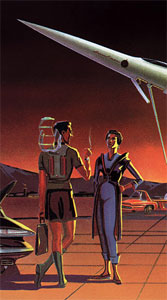 A gentleman converses with a lady.A gentleman may not accompany a lady unless he has been properly introduced. Whenever possible, a third party should handle these introduction ceremonies. If a mutual friend does not exist, a reputable robot may be commissioned to oversee and chaperone a gentleman and a lady on their first encounter. A gentleman does not hire a disreputable robot to introduce him to a lady, nor does a gentleman hire a disreputable robot to accost a lady, so that he may suddenly appear in the guise of a hero and ward off the miscreant machine to win her favor. No, a gentleman honors the laws and conventions of society and uses only appropriate channels when befriending a new lady.

When clad in a jetpack, a gentleman must refrain from showering a lady with exhaust or burning any part of her person or attire. A man who leaves a lady coughing in a cloud of black smoke is no more a gentleman than the common rogue or sky pirate. And indeed, a gentleman never wears his jetpack indoors. To do as much is to admit ignorance of or contempt for basic etiquette.

A gentleman does not fly over the head of a lady as she strolls, hooting and hollering for her attention. If a gentleman is to accompany a lady as she conducts her business, then he is to store his jetpack at any reputable jetpack stable and walk beside her. A gentleman must also make sure that he has been properly introduced to a lady before accompanying her. Otherwise, he might inspire rumors that impugn the lady's good standing. A gentleman must never permit himself to become a source of rumors.

A gentleman must never use his ship's tractor beam to harass a lady. Should he elect to operate a tractor beam in such a manner as to disturb a lady's dress, hair, or bosoms, than he has jettisoned his reputation and good standing into the vacuum of space. No lady should ever consort with a man who abuses his machines for tawdry gains.

If a lady transmits to a gentleman a private holographic correspondence, he must not show this hologram to any of his colleagues. To do as much would be to betray the lady's trust. A gentleman should similarly not discuss the contents of the hologram, unless the hologram was not of an intimate nature and the lady wishes him to convey its contents to others. 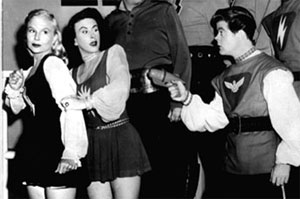 A common rogue.A gentleman does not "play" with his raygun in public, twirling it around or firing recklessly at inanimate objects such as street signs, pneumatic tubes, orphans, or trees. A gentleman must keep his raygun holstered at all times, save for when he, another gentleman, or a lady are in danger. Only then may he remove and operate his raygun with impunity.

A lady should be wary of men who associate themselves closely with others of lesser standing. If a man is frequently accompanied by another man of ill regard, a scientist, an orphan, a robot, a spaceman, or any form of monster, then he himself is not a gentleman. A gentleman may hire men who are not gentlemen, scientists, orphans, robots, spacemen, or monsters to aid in his business so long as the work is honest and the business is reputable. A gentleman never conducts business with pirates or Clawmen, nor does he himself work in service to a pirate fraternity or scientist. Most especially, a gentleman does not cavort with more than one lady in the course of a year.

A gentleman most certainly does not offer moonbucks to a lady in exchange for services. Any such request should be regarded with contempt and shock. A lady should walk away from any such man without hesitation. A lady who stays and willingly associates with such a despicable man lowers her own standing and soils her family's name. A lady who takes such a man up on his offers surrenders all dignity and respect. She may never again truthfully call herself a lady.