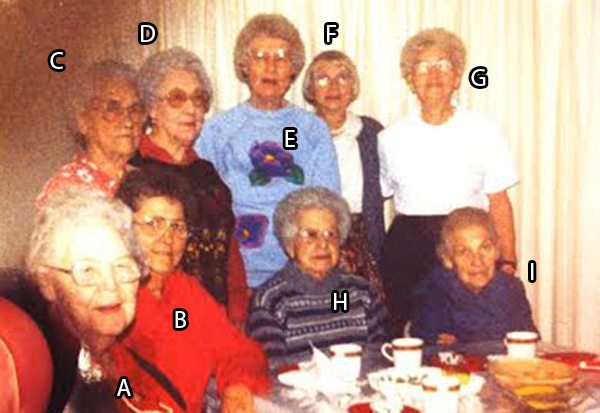 Above: The last-known photo of notorious crime gang "The Gingham Daggers" at a 45th anniversary potluck dinner in August, 1989.

36 missing persons may be the result of Miss Shirley Glockner, who made her debut into the world of organized crime by burying eight rival scrap collectors head-to-toe in three evenly spread layers during the summer of '43. After pleading insanity, Glockner served five years in prison, where she worked in the kitchen and became known for her horseradish, pimento, and cocktail onion gelatin dessert, which graced the cover of Betty Crocker's 1947 cookbook 18 Easily Chewed Desserts for your Shell-Shocked Hubby. While this dish has fallen out of fashion over the decades, remnants of it have been found in the aftermath of the Gingham Daggers' "enhanced interrogation" sessions.

B: Dorothy "The Disruptor" Fuchs

Dorothy Fuchs' racist jokes weren't just for her own enjoyment; letting one drop in the middle of a crowded bank or JC Penney's provided just enough of a distraction for the rest of her gang to decide which hostage to kill in order to ensure complete police cooperation. Originally thought to have been eliminated from The Gingham Daggers due to her continued remarks about "the damn Polacks," Fuchs went underground for nearly two decades before resurfacing during several recent Thanksgiving B&Es where she convinced multiple families of her status as a lesser grandma. A few choice remarks about "that monkey in the White House" is all it took for several dozen jewelry boxes to have their contents pawned for a king's ransom of gin and Correctol.

C and D: Opal and Pearl Blythe, AKA "The Doppelgrandmas"

Starting out as a tag-team of cigarette girls in the great movie palaces of the 1920s, Opal and Pearl Blythe got a taste for blood during a screening of 1924's Handshakes in the Park when the hat of superstar Randolph Valestri was lewdly doffed, causing a theater-wide riot. Following this, they were known to push harder stuff, which brought them into the jazz scene and influenced hits like Thelonius Monk's "There's a Horse Tryin' to Kick Its Way Outta Me." Opal and Pearl joined The Gingham Daggers in 1949, where the twin sisters used their telepathic link with one another to quickly rise to the rank of "underboss" and dominate the organization's white slavery ring and fudge-making competitions.

A tall drink of water at 5'9", Evelyn "The Blade" Ritter received her first nickname at the age of 12 during an underground Old Maid tournament that ended in nine fatalities. While she failed to protect her father from a death by table-bludgeoning, in the 75 years of time that passed, her tongue remains just as sharp as the butterfly knife she used to carve through the carotid arteries of two unlucky Irishmen. Debilitating arthritis has limited her capacity for violence, and Ritter now uses her blade to clip and pass off expired coupons. Every month, these efforts bring thousands of dollars into the Gingham Daggers' bankroll, which has a sensible interest rate and kicks 80 dollars into their Christmas club account biannually.

Known for her cheery disposition, Grace Mankowski worked her way through 14 husbands before the police caught wise to her penchant for murder via the means of cyanide-laced Necco Wafers. Her choice of this disgusting candy was by no means an accident; the men who fell for this plot simply assumed the overpowering taste of almonds and gradual heart failure were simply part of the Necco experience. "The Bad Candy Killer" hasn't been seen for nearly 25 years, so we advise that you continue avoiding putting Necco Wafers anywhere near your mouth, as you most likely have been doing already.

Growing up on her family's hog farm, Clara Spronk oversaw the slaughter of thousands of pigs, before the Great Depression saw her father crawl into a bottle and her mother crawl into a haystack to find the valuable needle buried inside. She was also a drunk. Clara avoided alcoholism and found her way into the open arms of the Gingham Daggers, where she took over the bureaucratic side of the organization, keeping the wheels of their syndicate greased and cataloging their unspeakable crimes with the help of her local Michael's senior scrapbooking class.

A woman of her word, Nellie Halasz hasn't spoken a single syllable after a remark about her cheese dip during a 1967 bridge game shook her trust in humanity to the core. Since that fateful day, she's refused to testify in court over 40 times, choosing instead to fix her steely, bird-like glare directly into the jury box. While this would land anyone in jail for contempt of court, Halasz's knack for strategic shawl placement has seen her walk away from dozens of non-guilty verdicts for "being such a trooper."

I: Vera "The Godmother" Walkinshaw

The ravages of age have destroyed Vera "The Godmother" Walkinshaw's mind, but she still remembers one thing: where all of the bodies are buried. That, and sending each of her 79 grandchildren a five-dollar Arby's gift certificate on their birthdays.