Having a problem with The Eddie Murphy Role Playing System or one of its critically acclaimed modules (Crimson Lords Of The Undertide Crater, The Secret Treasure Of Captain Boss Killingblow, Mega Troll Invasion)? Our customer service department is always available and more than happy to help. Before calling us with any questions, however, please take a few moments to see if your issue has already been addressed.

My copy of the game just had a VHS of Bowfinger in the box. Nothing else. Not even a cover for the tape, or a label identifying what its contents were. A few parts had been recorded over with seemingly random segments of a minor golf tournament.

Congratulations! You were one of the lucky few to discover the limited edition variant edition of the Eddie Murphy Role Playing System. Only ten of these collector's items were produced in the entire world!

I'm confused about the setting. Is this supposed to be a fantasy Dungeons & Dragons sort of thing? 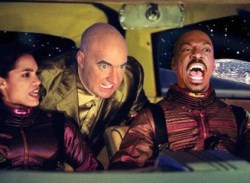 The beauty of the Eddie Murphy Role Playing System is that an adventure can take place anywhere within the MurphyRealms omniverse. From the red leather of Raw to the furthest reaches of sci-fi Pluto Nash space and everywhere in between, excitement and intrigue await in every conceivable locale. Parts of the game do support traditional fantasy if that's what you're looking for. The only limit is your imagination and Eddie Murphy!

One of the included die is supposed to be six-sided. It is indeed a symmetrical cube, each face a square with right angles, but it only has five sides. I've been looking at this thing for half an hour and I just can't figure it out. My ears are starting to bleed.

This was a simple manufacturing error. Nothing more. Please call our hotline immediately with your current location. Within minutes, a friendly representative will arrive to take the object off your hands at no cost. Please stay away from any windows and shield your eyes.

I'm having a difficult time grasping these stats.

Though the statline seems complex at first - and it is indeed very deep - we find that new players catch on quickly once they have played through a session. Just keep these explanations in mind:

Strength determines your character's ability to carry a Murphy (the standard unit of weight measurement in MurphyRealms) and to inflict damage.

Torqueness is used to calculate your ability to open a jar of pickles.

Luck is related to the chance that you will accidentally drop a jar.

Dexterity determines whether each of the other stats will be a 10 or a 1, but the stat itself is always a 5, so it's ignored unless it's 7.

Grip decides how likely it is that you will be able to open a jar of mayonnaise.

One of our players entered the Banana In The Tailpipe Portal more than three hours ago. They have not returned. Our shouts of alarm go unanswered, our attempts to go in after him are met with a rough push from an unseen force. 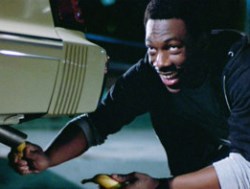 Please note the clear wording in the instruction manual, which plainly states that the Banana In The Tailpipe Portal is for entertainment purposes only. Any other use of the portal absolves MurphyCo of all responsibility. Furthermore, it voids your warranty and waives your right to request a refund.

Why can't I write my own name on the Character Sheet?

All characters within the MurphyRealms are, by their very nature, aspects of Eddie Murphy. As such, that is the name that each and every one of them goes by.

A living snake??? A LIVING snake?

I thought the miniatures were supposed to represent player characters and their enemies. These are just figurines from Monopoly. I'm looking at a terrier and a top hat right now.

They are not figurines from Monopoly. They are duplicates. Our team of experts spent the better part of two years carefully reconstructing the Monopoly miniatures down to the tiniest detail. Each is made of pure platinum, making them even better than the originals!

Our group is stuck. We reached the end of the first dungeon. We have the Golden Child dish of oatmeal with blood in it, the one that came inside the box. Now we have no idea what to do. Our Dungeon Master insists that he can't give us any more clues. We tried to move on and start another module, but it begins with the Golden Child dish of oatmeal standing before us, and won't let us proceed.

You're going to have to be more specific and descriptive. Every adventure involves the Golden Child dish of oatmeal with blood in it.