Welcome to the Thompson Psychiatric Institute for the Criminally Insane

They house the worst here.

The thrill killers. The crazed deviants. The serial offenders who can't be helped by a system that's broken and overwhelmed.

The crazies are everywhere. Polluting the streets. They're addicted to violence and death. They bask in the filth. They worship mayhem.

Who can blame them? Every bad thing society has pumped into them over the years. They never had a chance. Their soft minds were fried by the radiation blasting out of their TVs and boom boxes. Their reptilian brains were engorged by the sleaze simulators peddled to them by amoral vice merchants.

Once the devil was in them they were just so many puppets. Evil puppets. Make no mistake, my friends, society is reaping what it has sown.

I'm just here to lock them up. Clean up the aftermath. Some messes can't be cleaned up. 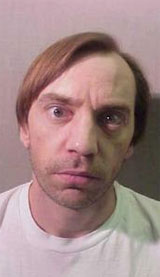 Age 32. When it comes to bad, Victor Bordon is as bad as they come. He didn't start out that way. He had a good home. Loving parents. Good grades at school.

All that ended on a quiet day in 1992. Victor Bordon was home alone. He had saved up his allowance to buy a music CD that was making the rounds. He put it in his boom box, turned the volume all the way up, and for the first time Victor Bordon listened to Ice-T's Body Count.

He murdered his first police officer nine days later. Bordon gunned down Officer Kyle Steckler with a stolen Tech-9 while the cop was filling up his cruiser. Bordon later claimed the cop refused to help him with a flat tire.

The authorities caught up with him two states away. Bordon was drunk on the ghetto thug lifestyle. A regular abuser and maniac killer. He was having sex with the daughter of a KKK Grand Wizard in the bathroom of a fast food restaurant when the police brought him down.

There's not much we can do for Bordon, his mind is so twisted up into knots from his childhood. The best we can do is keep him heavily sedated and listening to rap songs I have written about behaving responsibly and treating women with respect.