I know Something Awful is known primarily as a humor site, but many friends have encouraged me to share my true story with the world. Since this site gets fairly high traffic, I thought that it would be an appropriate venue to discuss my unique experiences. Maybe some other kid out there is growing up with problems similar to mine, and perhaps my story can be of some comfort to him. 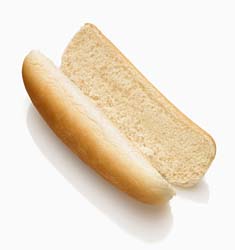 I was born with what are known as "fused genitals," which means my penis and testicles are, in simple terms, all one thing (though, at the same time, I don't really have either one). When I was an infant, my genitals just sort of looked like a flap of skin, but as I got older it became sort of a big sac of loose skin and hair. Imagine a guy's testicles, and then imagine that one of the testicles is about 6 inches long and really lumpy.

The thing is pretty odd looking to most people, and lord knows most girls don't want anything to do with it, but it's a decent size and I'm not ashamed. In terms of size and shape, imagine the circumference of two hot dog buns stuck together. The half of it toward my pubis is pretty densely hairy, but it gets a little balder as it goes outward. The testicles are kind of end-on-end inside the back half, and the front half is just kind of a sac of loose skin with some blood vessels and stuff inside. It's also very lumpy. It doesn't really get erect like a normal penis, but it does kind of engorge and swell up to about one and a half times its normal size, and it discolors a lot toward the end. If I get too excited it gets very purple and it's pretty painful, so I don't tend to look at a whole lot of porn (luckily, sex doesn't interest me too much anyway, since I take for granted that I won't be party to much of it in my lifetime).

Part One: The Babysitter

Though I was told by doctors when I reached puberty that I would never be able to feel physical sexual excitement, I already knew that wasn't true. Not being very old, I couldn't necessarily tell you what sexual excitement was, but I instinctively knew that I'd felt it; I'd felt that tingling, painful, pleasurable sensation in my genital sac many times in my life, and maybe it's not the same "sexual excitement" that people with standard genitals feel, but I'd definitely call it sexual excitement.

The first time it happened was when I was around seven years old. Though my genital sac is now about the size of two hot dog buns stuck together side by side, it wasn't that big when I was a kid; it was still much larger than most children's baskets at that age, though. In fact, it was a source of much childhood taunting, because if I ever wore shorts or sweatpants it would look as if I had a cucumber stuck in my pants. People called me "boner boy," not knowing the cruel irony of it (since I could never have a "boner" the way normal people have them).

Its relatively large size caused lots of problems, because children's clothes aren't really designed to accommodate a basket that large. One day, I had to go to a church function, and my parents insisted that I wear slacks instead of my usual sweats. I had a lot of difficulty zipping them up over my pubis, so eventually I stuck my hand in there and tried to hold it down against my body while I zipped my fly. As I got the fly up more, I slowly pulled my hand out so I could keep it held down as long as possible. Toward the end, there was just one thumb-sized spongy lump still sticking up/out, so I just tried to hold it down as best I could with one finger and zip up quickly.

It was a pretty big mistake, and the zipper caught it. It basically looked exactly like that scene in There's Something About Mary, where he gets his testicle caught (in fact, I got kind of nauseous when I saw that movie because it brought back the memory). The pain was terrible, but it was easy enough to get the zipper off. There was some bleeding, but I was too embarrassed to tell my parents, so I just washed the blood off and left it.

During the church function, apparently the blood welled up in my pants and soaked through, because stood up and noticed a large spot of blood on my crotch. I tugged my mom's sleeve and showed her, and she put a sweater around my waist and ushered me out of there to a doctor's office. The doctor stopped the bleeding pretty easily and bandaged me up (and took a ton of photos of my genitals, which should probably have pissed me off but I was used to doctors taking photos of it, so I didn't care much). He gave me a disinfectant cream to apply every day for a week to make sure it didn't fester, because the propensity of the area to sweat and shed lots of skin cells made it an ideal place for bacteria (I have bacteria problems to this day, and I have to use three different products to keep the genital sac relatively odorless).