Thanksgiving 1997. Inset: Buzz Aldrin.I suppose if you could use one word to describe our attitude here at Something Awful it could be "cynical", more likely it would be "moronic", "inflammatory", or "hootenanny". While the last one isn't an adjective per se, it is frequently applied to hobo parties and barn dances, both things I personally identify Something Awful with. We'll stick with the idea that "cynical" is the word you are using to envision the attitude here at Something Awful right now. Well, I've got news for you mister caring and empathy in your ivory tower, Something Awful is taking the holiday of Thanksgiving very seriously this year. To celebrate this first in the history of the Internet, I am devoting this entire update to thanking people and groups who have helped us out throughout the year.

The city of Dresden, Germany

The entire creative team behind Disney's "The Lion King"

The inventor of the helicopter

The Wu-Tang Clan not including Big Baby Jesus

The ghost of the black astronaut that Buzz Aldrin killed

All of the nerds who bitch about Tom Bombadil

All of the nerds who even mention Lord of the Rings

Buzz Aldrin's son, who played the role of Tom Bombadil in the animated version of the Hobbit.

Anyone who is about to e-mail me and tell me I spelled Tom Bombadil wrong.

The woman who allowed Wil Wheaton to have children.

The woman who failed to miscarry or abort Buzz Aldrin.

Thanksgiving 1999. Inset: Buzz Aldrin.I think that about covers it, however if I think of anyone else who absolutely will not be thanked this year I will be sure to mention them in our new feature "The Something Awful Weekly Thanks Mailer." You can sign up for this by sending letters with the subject "FUCK YOU" to aldrin.buzz@nasa.gov.

There are so many people that I would like to thank for helping out that there is no possible way we could thank everyone. If your name did not make the list this year that doesn't mean that we don't treasure your contribution every day, particularly whoever it was that sent us all that crystal meth. Thanks to their donation productivity here at Something Awful is through the roof!

When God created you Mister President, he broke the mold and had anyone on the original design team shuffled to some desk job in the filing department. You have stood tall in the face of national crisis, like an obelisk in a hurricane only with more conservative Christian values. I thought to myself just last year that I felt threatened in my bed by the agents of Iraqi despot Saddam Hussein, and what do you do? After you've gone and completely finished off all of the terrorists except for their reclusive and evil leader, you go after the exact person who I - and many other Americans - fear most. I think you are doing all the right things to make this country safe and if there is some address where I could mail my journal or diary to DARPA so they can make sure I'm a patriot and not a commie I would be more than happy to! 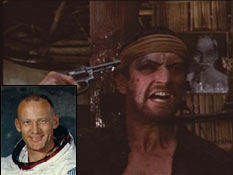 Thanksgiving 2000. Inset: Buzz Aldrin.David "Honeysuckle" Rogers, you are a humanitarian in red velvet and pancake make-up. We had thought that it would be impossible for good old Greasy to ever get laid, but thanks to your generosity and our pragmatism he has finally made that final leap into manhood. It was especially understanding of you to accept his requests to defecate on his face and call him "you Greasy bitch" while you inserted an arm up to the elbow into his colon. When he wanted you to drink his blood in a bizarre ritualistic manner you hardly even hesitated, and when he asked for you to put on the furry costume all it took was that pleading look on his face and an extra 100 dollars from the cash drawer. You are an honest pseudo-woman and for your charity we thank you.

If I had to be stranded on a desert island and I could only take one "spice" for the entire duration of this stranding it would be salt. Even though I might be able to extract you from the sea water it is unthinkable that I might fail at this and be left with a container of oregano to fulfill all my coconut and fish seasoning needs. Salt, the staff here at Something Awful thanks you for the incident in 1999 when a truck full of you overturned and prevented a serious accident from turning deadly. We were all horribly wounded when the Something Awful tour bus collided with the salt truck and when the truck overturned and spilled you all over us the pain of you being smashed into our fresh wounds was incredible. We cursed your name, we spit at you, but when we saw that you were soaking up the spilled diesel fuel we realized that your love had saved us all. Thank you salt, for a cruel mistress though you may be, your heart of hearts is free of malice.

The Greeks worshipped you as deities, but we knew you better as the two finest Doberman pincers ever assigned to protect the estate of Robin Masters. The way Higgins called your names to whimsically threaten Thomas Magnum was nothing short of wonderful. We laughed with you, we cried with you, and when the show finally ended we felt like perhaps we should have died with you. Thank you for entertaining us throughout the 80s and, thanks to A&E, into the 90s and beyond. More importantly, thank you for keepin' it real. I would like to add that I had to fight to keep Zeus and Apollo on the lists as Lowtax, while naturally a big fan of "Magnum P.I.", absolutely hates animals and refuses to have anything to do with them. Earlier this year Emily convinced him to go to the zoo and he ended up being ejected from the place for screaming at the penguins and attempting to set fire to a bronze statue of a lion.

The Magic of Technology

From beeps to flashing lights, you do it all technology, and much like a caveman recently unfrozen, we can do nothing but watch in a mixture of awe and fear. We don't understand you, we don't really know how to use you, but you make our lives easier every single day. Magic of Technology, let me ask you a question, how do you make the paper-clip and refrigerator magnet work? It defies gravity and clings like a spider to the surface of my refrigerator. But that's not all, oh no, as if enchanted by wizards when I push a button it will flange open and allow me to insert a small notepad onto which I might right things like grocery lists or magical spells. In the past we cursed you as evil, we imprisoned your practitioners as witches and devils, but today I would like to extend the thanks of Something Awful for making each day a little better than the last. 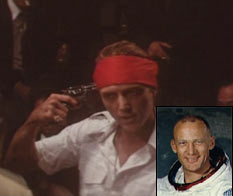 Thanksgiving 2001. Inset: Buzz Aldrin.Cheese was almost deserving of a thanks all its own, and salt was thanked, but your delightful combination of cheese, salt, and cracker, makes you worthy of individual thanks Cheez-Its. Many have tried to reverse engineer your deliciousness, from Cheese Nips to Goldfish crackers, but none can approach the grandeur of you. I like to eat you plain, Livestock enjoys you with milk, Greasy likes to crumble you up, mix you with cocaine, and lick you off the chest of a transvestite prostitute. What R-Lo and Integral do with you is between you and them, personally I think it crosses the line, but they wanted me to thank you too. Will there ever be a superior snack cracker? It doesn't take Ray Combs to tell me that the survey says no!

My Peeps in Philly

No "Big Ups" and "Mad Shout Outs" list would be complete without mention being made of My Peeps in Philly. I don't know what or who they are, but Something Awful would like to thank them from the bottom of our collective heart. Their support throughout the years, while intangible and bordering on imaginary, has meant so much to all of us. My Peeps, I don't know where exactly you are within the city of Philadelphia, but I would like to envision it as an environment suiting your boundless generosity. I think you are inside of the warm embrace of a giant animatronic teddy bear that feeds you hot oatmeal from a series of rubber nipples mounted in its chest and has hundreds of mechanical waldos to attend to your every need. If it turns out you are not located at One Giant Adorable Teddy Bear Strasse, then please accept my condolences and thanks My dearest Peeps. You are the lights of our lives.

This year we will be celebrating the Something Awful Thanksgiving much as we do every year. We will all be flying down to Seattle to visit a soup kitchen. We usually dress up as indigents and then wait in line to receive free turkey dinners. Usually Livestock plays the harmonica because he is really into the hobo lifestyle and then Rich gets drunk on cheap whiskey and demands I fist fight him. It's a great time and if any of you fans want to join us we will probably be at the East Street St. Catherine's Mission from 2-6 PM. If you come late, don't worry, we usually hang out in the alleyway next door crowded around a fire while Greasy tries to convince passersby that a two-liter bottle of his urine is actually imported champagne. Last year Emily lost all of her teeth when she challenged "Fightin' Pete" to a bareknuckle boxing contest and ended up passing out inside of the smoldering fire barrel.

Cliff Yablonski Thanks You for Being Ugly

Good old Mr. Yablonski is wishing Thanksgivings along with the rest of us here at Something Awful, he just tends to do things a little bit differently. For example when we offer our sincere gratitude, he says thanks by jamming a record-player down your throat one piece at a time or by gluing blasting caps to your face and kicking you down stairs. Coincidentally he too has a list of people to thank this year complete with pictures! 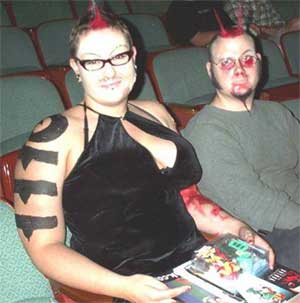 ...and this is why I don't go to the fucking movie theaters. Not that there's been anything worth paying to see in the last 25 years or so. If they ever fucking make "Law and Order: The Movie," I swear I'll be the first guy in line to buy tickets. I love watching Jerry Orbach beat the snot out of those little shithead punk kids who get out of line, and that drunk DA guy is okay too, although he should probably smack that woman assistant of his around a bit because she gets out of line sometimes and makes him lose the important cases about guys who kill their wives because they were pregnant with rape children or something. If they ever find the corpses of those two assfestivals in this photo, I wonder if Jerry Orbach will arrest me. That'd fucking make my day.

Cliff Yablonski would also like to personally thank you just for reading his latest update. Simply send a self-addressed mailing tube and he will fill it with a mixture of rabies-infected rats and holiday greetings!