Not Without My Emoticons: The Dumb Internet User Story 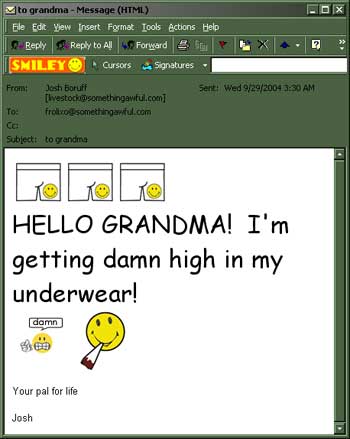 My e-mails are now 100% more awesome and worthwhile.In past articles, I've discussed emoticons a great deal, reviewing them and evaluating their function in our ever-changing society. Today I took the time to review a revolutionary product aimed at making a great multitude of emoticons accessible in an unprecedented manner: in e-mail and instant messaging. Finally, the power of imbuing your online communications with raw emotion is possible, and the timing is as right as ever. Using sophisticated technology, a young company called Smiley World was able to create a browser toolbar making the world of emoticons as simple as loading up Internet Explorer and traveling to a pornographic website full of carnal sluts willing to do anything for your pleasure. I don't mean to say that Smiley World is in any way affiliated with pornography or carnal sluts, just that their program is as easy to use as a carnal slut. Also I think it gave me gonorrhea, but that might just have been one of those crazy "only on the Internet, folks!" coincidences.

Let me quickly jump off track to clarify an ambiguity that plagues me in my ongoing efforts to collect and catalog emoticons. Recently, when I was discussing the need for a form of binomial nomenclature to keep tabs on emoticon varieties while on my lecture circuit, I was asked what the difference was between an emoticon and a smiley. In my research I have noted that the distinction is subjective, as the two individual terms are often used interchangeably. Primarily, though, emoticons deal with the visual representation of emotion, such as "happy" and "I have a zipper for a mouth." Smilies are more of an art form that can include emotion, but also encompass things such as actions, like playing a mandolin or dancing. History teaches me that smilies, in their current incarnation, are a derivative of the rise of emoticons. Thusly I use "emoticon" as a blanket term that encompasses smilies as well. This can seem confusing, I know, but the sooner the scientific community takes me seriously, the sooner we can make all this stuff official.

Now let us continue discussion of Smiley World and their wonderful toolbar. My life can now be divided into two distinct eras. Everything bad that's ever happened to me took place prior to my recent installation of the Smiley World toolbar. However, I can report that nothing bad has happened in the hours that have passed since getting a key to emoticon Valhalla. There are few things that truly wow me as a human being. One thing that wows me is the ongoing exploits of my imaginary friend, Mr. Rocket Corn, who has a cob that is made out of a rocket. Another thing is when I first experience an event that I know will change my life forever. When I first loaded up the Smiley World toolbar, it was an epoch in my life. It was the moment where my old skin was shed, and my new scales shimmered in the bright yellow smiling sun.

At first I was concerned that this new toolbar would take control of my life, dictating my emotions through visual conditioning of some sort. But of course that was paranoia, much like my belief that Dale Earndhart was killed due to the reckless driving of his older brother, Racer X. It was like Smiley World used advanced technology to map the full range of the emotional spectrum, creating the perfect face for every mood great or small. I've become a better man thanks to this program, becoming more in touch with a wider array of emotional outputs I never even knew I had. Before I was "wahhhh" all the time, whereas now I'm definitely more "wahhhhuuuaaaahhh" in my outlook and behavior.

What the Smiley World toolbar does is compress every human emotion and every human experience conceivable into about two dozen categories, featuring names such as "divas and dudes" and "funny incidents." I mention those two categories because they best represent my life. It might seem cruel and dystopian at first, but rest assured, compacting human emotion into small pictures divided into categories is exactly the kind of progress we need to advance as a species.

I can talk about the science until the cows evolve into homes, but let's get down to the basics. I'd to share with you a handful of these emoticons and experiences up close and personal:

All and all, I give the Smiley World toolbar four stars. This is the future of the Internet, people.

In utilizing this advanced peace of software, I realized something about human nature. In a way, emoticons are a part of us, as people, as human beings. Inside each one of us is an inner emoticon, the center of our emotional core. To truly reach our emotional potential, we must learn to expose this inner emoticon to the outside world. In future support groups, counselors will use an emoticon discovery strategy to unravel the complex web of human emotion and how it can overwhelm people.

In looking inward, I discovered that this was my inner emoticon: