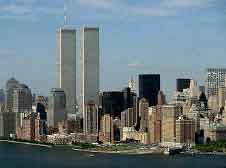 A big city. I think it's Wichita.

While watching a couple people on 4th Street get arrested for wearing clothes infested with 5,000 different forms of illegal viruses, I began to realize that I have spent a large majority (as opposed to a "small majority") of my life in cities across the US. Kansas City, Los Angeles, Seattle, Nashville... those are just four of the cities I can name without requiring my brain to lurch into gear and actually recall every city I've lived in. However, with the recent phenomenon of small towns trying to pretend they're in the "big leagues" so they can swindle honest, hard-working folks by slipping them Mickeys and liberating their cash via crooked Three-Card Monty games, it is becoming harder to discern a "small town" from a "big town" without the liberal usage of "quotation marks" around phrases that don't really "require them." With this reason in mind, I have created the Something Awful Big City Checklist (c) (Inc) (R) (TM) (NWO) (NPH) (opp). Simply scroll down this list of big city features; if your town matches over half the requirements or doesn't match less than 50% of the features, you'll confidently know you live in a big town. You will then be able to apply for "Big City loans" or work for the "Big City Police force" or participate in the "Big City 'Press Your Luck' fan club" or do whatever the hell people are supposed to do in big cities. Go through the list and determine what features your town matches, being careful to point out and publicly mock every single grammatical error. I make.

Random banners hanging from every street light. Each big city has a series of gigantic red banners declaring something along the lines of "MARCH 20th - OCTOBER 2nd: SAN FRANCISCO CELEBRATING THE 50TH BIANNUAL WEEKLY ANNIVERSARY OF THE INFLATABLE ATOMIC EARWIG" with some cryptic series of symbols and pictures beneath. I used to believe that these were advertisements for some failed exhibition in the city's art museum, but now I think that they're solely the work of vandals. I've seen the art featured in those exhibitions; NOBODY would willingly promote those things unless it's at gunpoint.

Street grates / manhole covers that spew spooky steam. I'm not sure where the obscene amount of steam comes from, but I assume it has something to do with either global warming or Congress failing to act in a bipartisan fashion.

An active "hole drilling" division of city workers. Half of the cashflow in a "big city" budget depends on handing out millions and millions of dollars to people who wear reflective orange clothing and drill holes in random sections of asphalt. Why? Because cities hate asphalt. They're still bitter that they don't have the technology to pave roads with mounds and mounds of raw taxpayer cash, so until technology catches up and supports this, they'll do the next best thing and take out their aggressions on the poor innocent little roads.

An entire armed division of Police who actively guard the hole drillers and wave oncoming traffic into other cars, street signs, mailboxes, brick walls, etc. Hole drilling is a dangerous job, as thousands of freelance "hole fillers" would undoubtedly sweep in and try to undo all the glorious work that had been done if the holes weren't guarded by a guy with bullets that blow up your guts when you're shot by them. The armed Police escorts are hired to stand around all day and look visibly bitter about the fact that they have to essentially guard an absence of material. 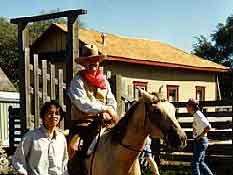 A small city. I think it's New York.

Two guys arguing about something while wearing scarves, despite the fact that it's Summer and around 90 degrees outside. No matter how hot it is or what season you're in, you can always find two guys wearing scarves and arguing with each other. I imagine they're angry because they just got fired from a nearby Winter fashion factory and they don't know how to funnel their anger into more productive means, many of which involve spitting more when they talk.

One way streets that don't go anywhere logical. Generally speaking, all big cities were built back during the 1500's when roving hoardes of Christians swarmed the streets, attempting to convert all heathens to their "correct" god. To combat this unstoppable force, city officials decided to construct an intricate series of one-way streets that all invariably led to the "bad" parts of town, despite which direction they were headed. As a result, all marauding Christians ended up arriving in a part of town than encouraged shoving slabs of metal through exotic various body parts, and their reign of terror promptly ended. Unfortunately, these roads still stand today, providing a quick and efficient way to both go somewhere you never wanted AND take an informal poll to discover the most popular caliber of illegal handgun bullets.

Parking fees which cost more than your car itself. Operating a parking garage is one of the most profitable industries in the entire world, relying on a steady supply of confusion and hopelessness to rake in a cool $58 billion per day. Back in the "good ol'" days of American history, when lynching black people wasn't a faux pas, parking garages charged a simple, fixed amount, usually like 10 cents an hour or something. Of course, after adjusting that figure for gross inflation investment net deduction tax deferment, that comes to about $450,000 per minute, which is on par with today's prices. However, parking garages are getting more and more confusing with their pricing structure, hoping to bamboozle their clients. They proudly display signs like the following:

By the time anybody has figured out how much money needed to pay, they end up owing an extra $200 for the time they spent to do so.

Liquid alien death microbes raining from the sky. Whenever walking around a major city, there are little drops of condensation which continually fall from the sky. Originally I had believed this to be rain, but the freakish event would occur even when the sky was completely clear. Then I thought maybe they were from external air conditioners, but I still felt them pelt me in the dead of Winter. The only logical explanation that I can come up with is that they're alien death microbes that are slowly killing us by infecting our brains and making TV sitcoms like "Will and Grace" become popular.

Bonus big city features: woman who looks like a filthy Muppet, some guy handcuffed to the side of a Police car, dirty park that has an iron statue of some goofy white guy on a horse, tiny Asian convenience store, bum selling newspapers that he stole from a newspaper vending machine, ambulance driving around the city in circles with its siren on nonstop 24-7, bus bench displaying a picture of a bug-eyed lawyer grinning like the Specter of Death, alleyway lined with over fifteen million garbage dumpsters through it.

So count up the number of checkboxes you have marked, subtract that number from 8, divide the total by 8, multiply by 100, then load the resulting number of bullets into your gun and shoot yourself if you were dumb enough to actually mark checkboxes on your computer's monitor. Break out the bottle of Mickeys and get ready to win the car of your dreams in the big city Three Card Monty challenge!