Someone Please Nuke Us Already

North Korea has declared their intent to unleash a "pre-emptive nuclear strike of justice" against South Korea and the United States. I appreciate the offer. I really do.

Unfortunately, North Korea issued many similar threats in the past and have only followed through... 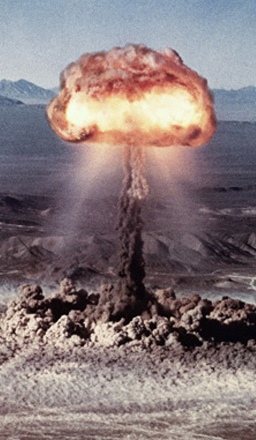 Hold on. Let me consult this enormous tome. I'm flipping through its arcane contents for several hours, making interested "Hmm!" noises as my finger scans the waxy pages. I'm also using a quill pen to jot down figures on a parchment scroll covered in an unreasonable mass of complex mathematical formulas. Now I'm gesturing for you to wait while I finish my calculations. Now I'm whispering a question to a frail old man with round wireframe glasses, and following him as he leads me through corridors of enormous bookcases. Now he's climbing a ladder to pluck a dusty old volume off the top shelf and handing the book to me. Its title is What Numbers Mean. Now I'm comparing a page of this book with the results of my calculations from earlier.

The answer is zero. They have followed through zero times. They haven't blasted the United States off the face of the map even once. Which is a shame.

I welcome a cleansing rain of nuclear death. As an American, I know that the only survivors of such an attack will be myself and precisely enough attractive female celebrities to represent every hair color and ethnicity without overlap.

I will wander across the wastes of this ridiculous country with a broadsword at my hip and a cloak on my shoulders, getting into sexy adventures. Obviously magic isn't real, but my sword will be at least a little magical. It goes without saying that it will also be a Legendary sword with a name like Lightbringer.

There will be some lingering radiation, I suppose. Not everywhere. Certainly not enough to kill me, or even make me sick for long. Just enough to occasionally make my adventures more interesting. For instance, while retrieving the real constitution (the one with a treasure map on the back) from the Mall of America, I might stumble into a green cloud of radiation. It will make me cough. My vision will go swimmy. But I will bravely power through. Maybe I'll collapse, only to wake up a few hours later, a bandage wrapped around my head but otherwise completely fine.

All the buildings will look rad. They will be overrun by fauna on the outside, a breathtaking representation of nature reclaiming the world from man's hubris and selfishness. On the inside, everything will be clean and all the electricity will still work. Internet access will keep working as well, so I can check my email.

As you'll recall, I came into this whole "getting nuked" thing as a skeptic. Now that I've thought it through and fully considered every side of the issue, though, I'm really not seeing any downsides. I say go for it. If you've got some nukes to spare, do me a personal favor and toss 'em this way.