The Five People You Will Meet in Cyberspace

The promise of Virtual Reality is finally nearing the light of day. Thanks to big developments from Oculus, Valve, Microsoft, Hormel and Sony, everyone will soon have access to this mesmerizing digital frontier. With new headset devices, skintight bodysuits, room sensors and controllers, people will be able to leave this world behind and journey to amazing new virtual lands. 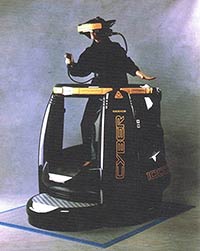 And "Cyberspace" is where virtual reality shifts into overdrive. Imagine finding yourself in a dark, musky dungeon. As you explore the torch-lit passageways, you make a startling discovery: a cache of beautiful dragon eggs. Instinctively, you move to sit on them. It's a fantasy, but it's as real as anything you've ever experienced.

For all the attention and buzz virtual reality is getting right now, you would think it something entirely new. The truth is it's been around for decades. Only now is the technology catching up with the dream. Even still, there have been some die-hard users manning Cyberspace since the 1990s, when the dream of virtual reality first emerged. Though their technology may be primitive, their dedication is inspiring.

In a few short weeks and months, consumers will start taking their first steps into Cyberspace. When they arrive, they are certain to encounter some of these old timers. To help prepare everyone, let's take a few minutes and get to know these vanguards of VR. 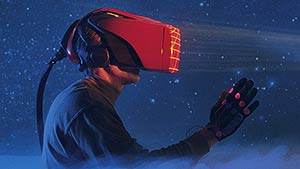 Gary has been around so long he has taken on the title of Mayor of Cyberspace. He is always happy to welcome newcomers, but he has a reputation for being pushy. He likes to give you a guided tour, and wants you to do exactly what he says. He means well, but he frequently rubs people the wrong way. Gary is a mandatory two-gig install, so you have to get used to him if you're serious about Cyberspace. Gary will digitally parent himself to your avatar, so he will always be there to deliver one of his trademark catchphrases, like "It's Gary Time!"

Around Cyberspace, "that's our Gary" is something of an old saying. You'll be saying it a lot before long, too.

Gary's avatar is a cube with a picture of a different beautiful woman on each side. He can also make your CD-ROM drive open, so watch out.

Chance was another Cyberspace early adopter. When so many others were giving up on the dream, Chance remained. He spends upwards of 12 hours a day inside Trivia World, and has done so for over twenty years. He has over 250,000 Trivia Orbs and commands a legion of 5,600 trivia bots. Chance was the one responsible for putting the Chrome Sphere in the middle of the checkerboard, which makes it impossible to play chess or checkers. He says he will not move it until somebody usurps his score in Trivia World, something that should only take a decade or two to accomplish.

Even though he's rude to newcomers, he's still excited that people are finally embracing Cyberspace. Be prepared to answer trivia the second you come in contact.

Chance's avatar stopped working fifteen years ago, but you can see his name floating above where he is standing. 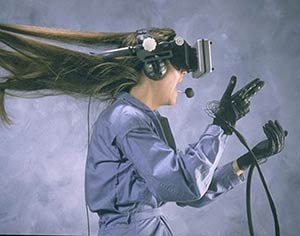 TheTroutMan has been here since the 90s, waiting for everyone to catch up. TheTroutMan looks like a beautiful teapot and likes to talk about fly fishing. He loves challenging "newbies" (new users) to rounds of Golph, a competitive five-dimensional version of golf played on rotating platforms. It is difficult to beat TheTroutMan, since he has mastered Cyberspace and knows how to twist it to his advantage, but if you do he will give you the Key to Area Z and a datapack containing over 200 virtual hats.

Blake is a really cool dude, always looking for new friends. Blake promises to teach everyone how to surf on cyber waves, and mentions having a bunch of extra binary boards to share. Blake has an uncle who is very wealthy, and Blake says his uncle can get you just about anything, no charge. Blake usually mentions bikes, and asks you want kind of bike you want. He often asks for your Social Security Number, which he probably just needs to make sure he gets you the right kind of bike. Blake is most often found in the center of the labyrinth, shooting an orange laser at the force field surrounding the Secure Data Node, where all credit card and personal records are stored.

Blake's avatar is a red humanoid body with the anarchy symbol textured on it. 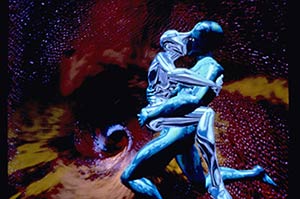 V1S0R is a relative newcomer to Cyberspace, having first arrived in 1998. He's had a rough go of it, though. Sometime in early 1999, V1S0R got stuck in a pillar in the Casinoverse and hasn't been able to break free. He has since learned to move beyond the physical limitations of his avatar, and control the slot machines and lighting of the Casinoverse. He can communicate, albeit crudely, by flickering the lights. Since there aren't a lot of folks in Cyberspace, few have taken the time to translate V1S0R's coded messages. All we know is that he does not understand what is happening to him and is in a lot of pain. He'll probably ask you to help him die. Be sure to say "hi" to V1S0R if you swing by the Casinoverse.

As Cyberspace grows in popularity, you're sure to encounter many more explorers, but it's the old guard who will be the most memorable. They've been there since the beginning, keeping the dream alive for all of us.