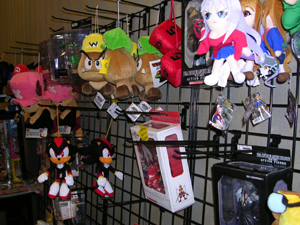 The streets of Shibuya make this look like child's play.The rest of the weekend was mainly spent on my hotel bed, absolutely enthralled in revisiting the Legend of the Galactic Heroes universe – and you’d be crazy to think that I brought my original DVDs with me to the States. Nope, they’re all under lock and key at a Tokyo bank, completely paid for thanks to that war bond my grandpa gave me on his deathbed. I guess if Grandpa Max knew his grandson possessed the entire Legend of the Galactic Heroes set, he would know that he didn’t lose his legs in the Pacific Theater in vain… even if he was fighting for the wrong side. Most of my enjoyment, however, was cut short by the incessant interruptions of a certain Rob, who kept asking if I wanted to “check stuff out.” As much as I loathe Rob, I pity him, too; he can never possess the knowledge and love I have for Japan, no matter how much he tries. So I accompanied him to the dealers’ room, to scoff at the merchandise and inform the unlucky consumers of the inferior products on sale – even though they deserved to be fleeced like the mindless sheeple they are.

I was not at all surprised when the room looked like someone emptied a Japanese dumpster on a group of poorly-arranged tables. I have been inside of many Japanese dumpsters (mainly to increase the size of my substantial manga collection), and what I saw in Columbus was no different. Rob went off to look for products based on the mindless trash he enjoys, while I would pick up random items, shake my head morosely, and return these items from whence they came. I did see something I liked, however – a plush figure of Shadou za Hejjihoggu (Shadow the Hedgehog) that I somehow missed during my usual weekend-long excursions to the Akihabara Marketplace. I asked the vendor – who was clearly not Japanese – the price of the item, to which he replied, “Twenty dollars.” I was incensed. “Twenty dollars? Why, with my connections in Japan, I could get that for 4500 yen!” It was then I was asked to leave the room; and it wouldn’t be the last time I would be given that command this weekend. Rob met up with me at the entrance, holding a Samurai Champloo poster. Rob, you ignorant bastard.

”A manslayer is a manslayer till the day he dies." – Rurouni Kenshin