Vowing never to return to the dealers’ room, Rob and I took in a few panels. The prospect of a Metal Gear Solid panel delighted me so (after all, I am a follower of Kojima Hideo’s philosophy, as seen in Metal Gear Solid 2) that it didn’t even strike me that the moderator of this panel might know less than me about the franchise that has proven gaming’s validity as an art form. Inevitably, his utter lack of knowledge about Policenauts made me storm out of the room, slamming the door behind me, which probably destroyed that fool’s attempt at panel moderation. Rob didn’t come with me, but I didn’t need him anymore; for what I saw next strengthened my resolve to stab at the very heart of Ohayocon in a way only I could. My poorly-produced con program told me that my mortal enemy, Tiffany Grant, would be hosting a Q&A session the next day. 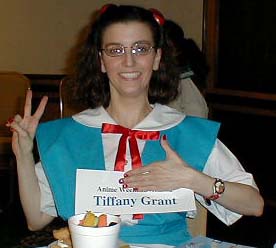 She looks more like Ritsuko than Asuka, am I right?I know I have not spoken much about disgust in this review of Ohaycon, but Tiffany Grant disgusts me on such a level that it is impossible to relay in words – let alone in a language as savage as English. You see, Tiffany Grant is a scary old woman who once played a character in an anime bastardization – er, English dub - over a decade ago, and to this day she has the hubris to masquerade as this character as if she knew the original creator’s intention and the character’s complex psychology. Whenever I see her rapidly decaying body wrapped in a plug suit crudely designed to resemble Asuka from Neon Genesis Evangelion, I vow on my collection of Azumanga Daioh pencil boards to unmask her as the fraud she is. Overcome with sweat and rage, I used the autographs section of my program to construct the perfect burn on Tiffany Grant. At first, this insult was mostly devoted to the fact that she smells like your hands do after you handle pennies. This, however, did not express the utter contempt I have for Tiffany Grant. Not giving up, I cranked Morning Musume on my iPod and formulated a plan that turned out to be the craftiest revenge scheme ever concocted at an anime convention.

Rob, confused by my interest in attending an event at Ohayocon, reluctantly followed me to Tiffany Grant’s panel. There, a dozen misguided fans of her “work” (I can’t believe I’m giving it that much dignity) asked her inane and pointless question after question. But soon, it was my time to strike. And strike I did. When her leathery, crow-footed face turned towards my raised hand and said, “Yes, the boy in the Sailor Mercury t-shirt,” I sprung into action. It took me a brief 20 seconds to acquire the bokken (wooden sword) I had secured to the underside of our chairs with duct tape the night previous. Shouting “Japan BANZAIII!” in the manner of those noble kamikaze pilots from the War of United States Aggression (so tactlessly referred to in your history books as “World War II”), I charged the stage, bringing down the bokken forcefully onto the plywood table in front of Tiffany Grant. It was a tragic mistake not to channel my ki correctly. The bokken splintered into a thousand pieces, leaving me with no other plan of attack besides shouting, “You’re no Asuka!” as two Ohayocon toughs escorted me out of the room. For me, the battle had been won.

In what seemed like a miracle, the Ohayocon staff told me I was not allowed out of my hotel room until Sunday afternoon, when my controversial nature wouldn’t affect the then-over con. I didn’t miss the activities one bit, but that baka Rob was so caught up in enjoying the heights of mediocrity that he forgot to tell me he was leaving. But no matter. I spent the last 18 hours of the con staring past the Columbus skyline, hoping to see a glance of my treasured Nippon in the distance. I missed her so.

In closing, I give Ohayocon 2007 my lowest rating ever.