One More Thing Before I Go

I would really like to pretend that one day, when I am old and infirm, my consciousness will be uploaded to some sort of robotic body and I will be able to live forever as a titanic metal warlord. Even a titanic metal bakinglord or animal husbandrylord would be sufficient as long as I become immortal in spite of my kingless blood. When the hallucinogenic drugs wear off I am left with the stark realization that I will one day die. We are all doomed. Every one of you reading this is doomed. Medical science can't save you, vigorous prayer can't save you, and even the immortality rings of Alex Chiu will be no barrier for the Reaper's inevitable visit to your doorstep.

Once you're aware of your own mortality you become more clearly focused on setting and achieving goals. A lot of people want to do things like see Europe, put their kids through college, or write a book. More adventurous souls try to challenge their willpower and endurance by climbing mountains, swimming across particularly large lakes, or eating the most hotdogs in history.

I want to see… 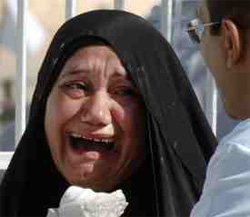 …a muslim woman crying about something other than the death of her son or husband.

…a drag race where both cars flame out and crash at the exact same spot on the track and the drivers are okay but they both think they won so when the judge calls it a draw they fist fight to see who the winner is only I don't know if they have judges in drag racing.

…a golem or some sort of mud man. Like it can be a mutant guy who just looks like he's mud but it has to smell and feel like mud when you touch it or it could be a robot I guess. That wouldn't be too hard just take a regular robot and cover it in mud. Then to keep it mud you'd have to spray water on it and maybe that would mess up his programs or something.

…a guy wearing a "Beaver Patrol" shirt who actually has the job of patrolling some sort of nature preserve or something and he has to arrest beavers.

…a fish that has the face of a man but the voice of a sensual woman.

…two cop cars chasing a drunk driver and the drunk driver wrecks his car and both cop cars pull up and then one cop walks up to the other and is like "I'm sorry Officer Stenfield, I have to write you a ticket do you know how fast you were-" and then right as he is about to finish the joke the drunk driver's car blows up in a huge fireball.

…a bunch of kids at an isolated Victorian-style orphanage with a ruthless taskmaster of a headmistress who are just laughing and playing games. 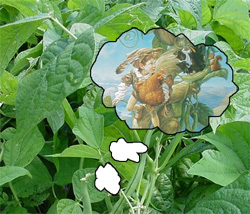 Give me, a bean to build a dream on.…an episode of Iron Chef where the secret ingredient is like Ritz Crackers or Hostess Fruit Pies and then Hiruyuki Sakai makes an apple fruit pie gelatin with swallows nest and truffle glaze.

…a kid who gets tricked into selling his cow for some magic beans only instead of planting the beans he just eats them and they give him all kinds of awesome bean-related powers like he can control the shape of beans or make bean stalks grow faster than usual (but not bigger or anything) and then at the end it turns out it was all a dream that a bean stalk was having because I like irony.

…two blimps crashing into each other over the North Atlantic while attempting to circumnavigate the globe. They don't have to explode, but that would be nice from a viewer's perspective.

…WWE wrestler HHH changing a flat tire on the interstate and then when he bends down to pick up like a lugnut or something his pants rip right as a school bus goes by and all of the kids laugh at him and then HHH starts sobbing.

…a town somewhere, probably where there is a cake factory or something, and for a festival or what have you the town is going to bake the world's biggest cake. So they put like 50000 times the normal ingredients for a cake into a giant bowl and then mix it up and then put it in a giant pan and put that in a giant oven. The thing is if a cake gets to be a certain size it becomes unstable and right as they cut into it, and it looks really delicious mind you, the cake explodes in a huge atomic fireball proving that in the end the greatest threat to mankind is our own hubris. 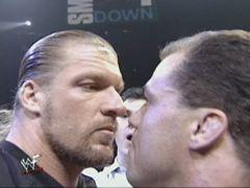 More like Happy Heart Hugsly.…Australia. Then I want to go to this show where this expert Crocodile Dundee type of guy shows off how to throw a boomerang and he hauls back and chucks the thing and it flies off into the distance and he's like "well mate you can't win 'em all" and then like months later he is visiting America and I happen to bump into him and just as we are talking the boomerange comes back around and it hits him right in the balls. I mean RIGHT in the frickin' balls.

…Ty Cobb beating a child with a broom.

…a serial killer that is a pretzel or just a guy who wears a pretzel suit because I think it would really steal the thunder of all those assholes who think the president almost getting killed by a pretzel was funny.

…a postal mix-up that accidentally sends all of Santa's mail from the north pole to some lucky kid but then when he opens all the letters it's just like utility bills and angry letters Santa wrote to Reader's Digest because of a story about a dog saving its master by dragging them out of a burning car that he believes was fabricated.

…some Nazi dude in full dress uniform at a protest holding up a picture of Bush's head Photoshopped onto some giant hippy like Jerry Garcia. 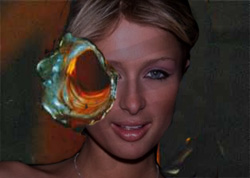 No, stop it, I'm sore, I don't like this position.…fire a shotgun into Paris Hilton's midriff, but she's so skinny that the shell goes through her and makes a hole that reforms like the T-1000 and she puts down her Sidekick long enough to waggle her finger at me and then I shoot her with a grenade launcher and she bursts into a twisted mass and I kick her into lava.

…travel to a space station so that I can be the first man to smoke a cigarette in space.

…set up residence in French Guyana and establish a voodoo cult that believes I am the living manifestation of Bon Dieu. My followers will refer to me as Papa Whitey and together we will form the First Voodoo Bank & Loa Trust and take over international banking. By 2030 Voodoo will be the dominant religion in Western Civilization.

…snorkel dive at the Great Barrier Reef and then blow it up with an atomic demolition charge. Afterwards I will stand over the ocean on a platform suspended beneath a helicopter and declare all fish to be free and a bunch of fish will jump out of the water and into my arms and they will giggle and kiss my face and then I realize they are radioactive but it's too late and the damage is done and I become super strong and able to read books by looking at the cover.

…learn how to speak Chinese so that I can fly to Japan, attend a Nintendo press conference, and then ask over and over again in a variety of different ways "do you think Nintendo is dead?" Then I will realize that they speak Japanese and not Chinese so I will hire a beautiful Japanese interpreter, but I become obsessed with making her say really nasty sexual things in the car ride to the press conference and I end up getting arrested for shaming her ancestors.

…use nanites or some sort of futuristic technology to change myself into a really comfortable chair and then have myself delivered to Liv Tyler only it has to be before like 2020 or something and she had better not eat beans.

…learn how to be a sorcerer or warlock so that I can scry into the future and then use the information I have gleaned to spoil Harry Potter books for children.

…discover a method to make infants cry on cue in public that does not get me arrested.

…eat more than a dozen pints of Ben & Jerry's ice cream in a single day and then totally chill out and maybe doodle on my guitar a little bit and record it and send it in as a demo and get a record contract and then form a touring jam band called Ice Cream Truck that becomes the next Grateful Dead until I realize I hate that kind of music and the band breaks up citing creative differences.

I may not manage to make it through all of these things before I die, but with a little help from modern medicine and possibly a robotic body, I think I can satisfy my grandchildren.

Ink From a Stone

Hey good-looking, I've got a Daily Dirt you might be interested in! Oh, you think you're too good for me? Well, nuts to you!